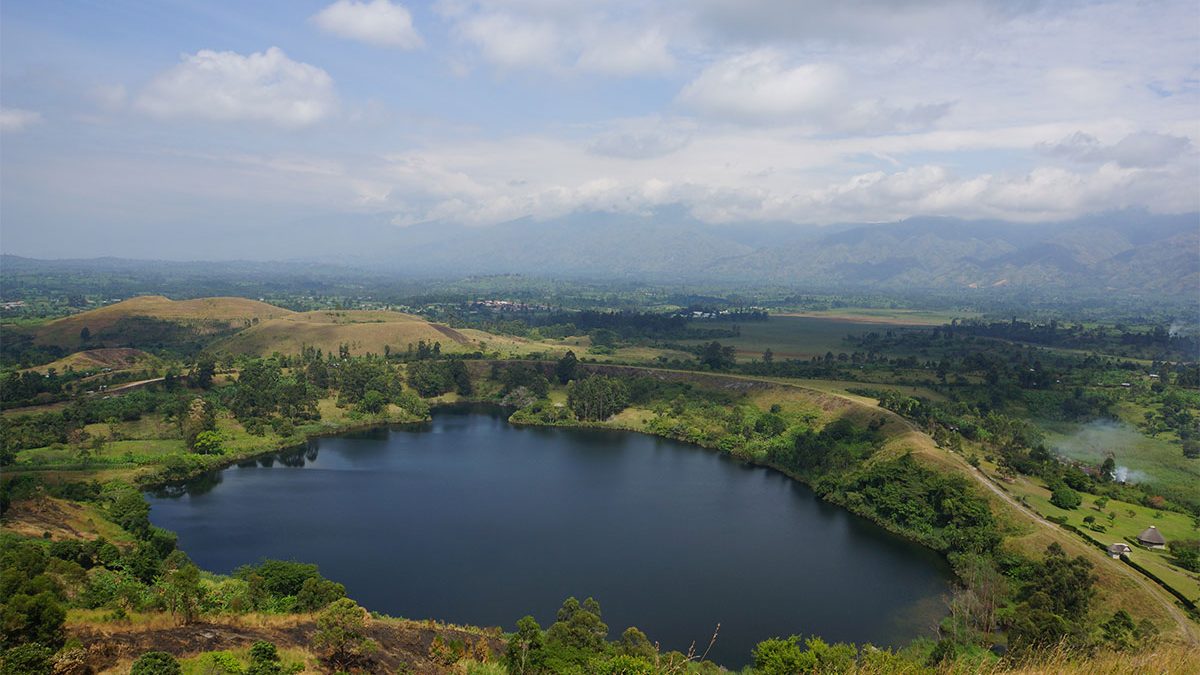 Activities and attractions in fort portal – Fort Portal in western Uganda is in the seat of both Kabarole district and Toro kingdom and is named for Sir Gerald Portal, a British Special Commissioner for Uganda, whose statue graces the main road of the town. Situated between the Rwenzori Mountains, Kibale National Park and Queen Elizabeth National Park and semuliki national park it is a significant market town.

How to get to fort portal-Kabarole district.

There are 1:30 minutes scheduled and charted domestic flights from Entebbe to kasese operated by Aerolink which is about 2 hours from kasese to Fort portal.

The Amabere Caves also known as the Nyakasura Caves given their location at Nyakasura Falls, are located some five miles from Fort Portal on the Bundibugyo Road. Not really caves, more a large overhang, the name Amabere Ga Nyina Mwiru translates as “Breasts of Nyinamwiru” with Nyinamwiru being the daughter of a local usurper king who reportedly had her breasts cut off to make her less attractive to men.

This rather drastic plan failed and the king, Bukuku of Toro then hid her in the cave. However with her allure still strong she became pregnant to the Batembuzi King Isaza and later gave birth to their son, Ndahura. Unable to breastfeed the infant herself she used what looked like milk dripping from the stalactites, which appeared milky because of its calcium content. Ndahura went onto fulfil a prophecy that he would become king and take over Bukuku’s throne, a throne that was rightfully Isaza’s. Ndahura went on to form one of the great empires of the Great Lakes area of Africa. Or so legend has it!

To be honest the caves are probably worth a visit only as part of an extended walk in the area which would also take in the waterfall at Amabere as well as the three local crater lakes.

Whilst there you can stand behind the waterfall which is a great experience and even swim in the small pool itself though its icy cold and you may end up surrounded by colobus monkeys!

Semuliki National Park is slightly different from other national parks in Uganda as it doesn’t boast much animal wildlife, though there is some, however its main attraction is its birds and hot springs. The park is next to the Semuliki and Lamia rivers and is located on Uganda’s border with the Democratic Republic of the Congo with Lake Albert to the park’s north and the stunning Rwenzori Mountains to its south-east.

semuliki national park Located some 150 miles from Kampala and covering an area of 220sq kms, the park is home to 442 bird species, 53 mammals and look away if you are squeamish ~ Goliath and Rhinoceros beetles some of which measure four inches long!

Other attractions are a Pygmy village and the hot springs at nearby Sempaya located in the Semliki River Valley close to Budibugyo town best known for having a hot water geyser shooting up from an eight-meter wide hole ~ the largest of its kind in Uganda.

Whilst in Semuliki National Park Mungilo Waterfall is worth a visit where you can fish, swim and bird watch.

The park, one of Uganda’s newest having been designated as recently as 1993, is managed by the Ugandan Wildlife Authority and is home to around 100 Batwa people who rely on the forest for food, herbal medicines and construction materials.

Activities and attractions in fort portal – Rwenzori Mountains National Park was designated in 1991 achieving World Heritage site status in 1994 to protect the highest parts of the mountain range and covers most of the centre and eastern half of the mountains ~ an area of some 384 sq miles. It is home to over seventy mammal species and 217 bird species.

The mountains, however, are probably best known for their stunning views and as a world-class hiking and mountaineering destination. For those undertaking these longer trips in the mountains, there are a number of scattered by established camps including the John Matte Camp on the

One of the park’s main attractions, though, is its chimpanzee tracking experience along the Kanyanchu Primate Walk where 13 species of chimpanzees can be seen going about their daily routines. The people living in and around Kibale National Park are mostly Batoro and Bakiga with the Batoro being native to the area later joined by incoming Bakiga from south-western Uganda.

The park is divided into seven zones for management purposes: research, natural reserve, civic-cultural, recreation, harvest, community and protection with an emphasis on conservation.

There are many places to stay in the park and accommodation including safari lodges which though sometimes expensive help you make the most of your stay rather than travelling in each day from town such as Fort Portal over 20 miles away to its north.

If you have further information about the Kibale National Park whether it be places of interest or accommodation contact us using our contact form. Now check out the main tourist attractions in the park in the above video.

Most travelling to Western Uganda will treat themselves to a once-in-a-lifetime safari at Queen Elizabeth National Park. Once-in-a-lifetime because so many safari tours keep you cooped up in a small minivan allowing you to take turns to pop your head through the skylight taking photos through the windows however with many Queen Elizabeth National Park safaris you get to sit on top of a jeep as you travel through the park, capturing stunning photographs such as those in our slideshow (right).

Queen Elizabeth National Park is the most popular destination in Uganda for those looking for a safari not least because of its diversity stretching from the Rwenzori Mountains that straddle the border with neighbouring Democratic Republic of Congo to the shores of Lake Edward taking in forest, savannah and wetlands along the way.

Queen Elizabeth National Park was recognized on 31st March 1952 (then known as Kazinga National Park until a visit by Queen Elizabeth in 1954) by the National Park Ordinance in order to prevent unregulated hunting by both Africans and Europeans and today is home to buffalo, elephants, lions, leopards, hyenas antelopes and so much more, in fact 95 mammal species. Oh, and those lions are the tree climbing variety, not found much outside Uganda!

It also has over 600 bird species, the largest bird population of any protected area in Africa including the African skimmer, Chapin’s flycatcher, Pink-backed pelicans, Papyrus canary, Shoebill stork, martial eagle, black-rumped buttonquail as well as the great flamingos.

When undertaking Queen Elizabeth safaris we recommend you indulge in a boat ride along the Kazinga channel, a man made waterway that connects Lake George to Lake Edward from where you will get a great view of most of the mammals that inhabit the park, close up (but very safe!) as the shores of the channel are heavily populated by the park’s mammals as well as reptiles such as crocodiles.

There are many different safari tour operators in Queen Elizabeth and a number of accommodation options to suit every budget. Walks, camping, and much more is available in the park as well as including in local culture for those undertaking a longer safari. 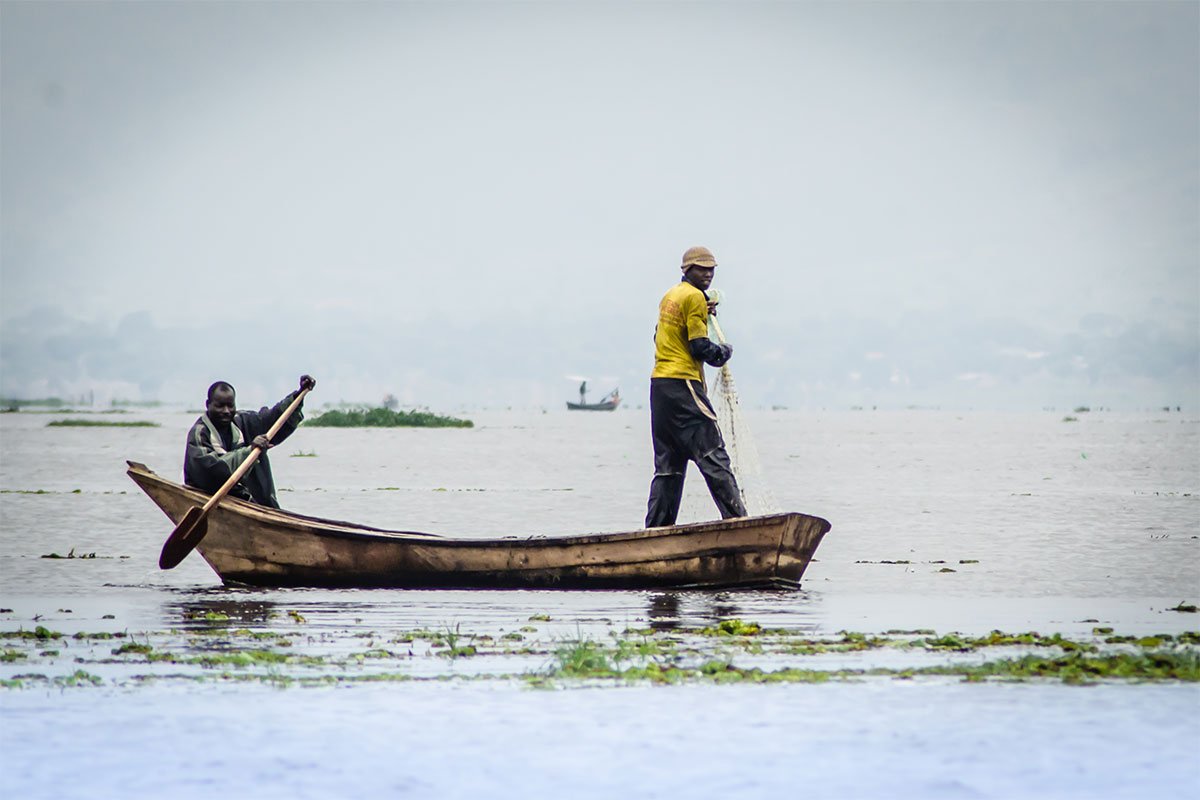 Activities and attractions in fort portal – Lake Albert was so named in 1864 by European explorers Samuel Baker and Sass Flora when they “discovered it” and named it in honor Queen Victoria’s consort Prince Albert who had died three years previously.

It was briefly renamed as Lake Mobutu Sese Seko after by President Mobutu Sese Seko Kuku Ngbendu wa Za Banga of the Congo (President 24 November 1965 – 16 May 1997) before reverting to its widely known name and is Africa’s seventh largest lake measuring some 100 miles long and 19 miles wide with a maximum depth of 168 feet.

Lake Albert is sourced by water from both the Semliki River from its south and the Victoria Nile at its more northern end. To its north the water flows into the Albert Nile, which becomes the Bahr-el-Jebel as it enters South Sudan. (It is believed that between 14500 and 1200 years ago during the last glacial period, the inflow from the Victoria Nile was blocked leading to a significant drop in its water level.)

Although a large lake there are no major towns on its shores on the lake’s Ugandan side, however a relatively small population live in nearby villages with Bulisa being the largest town at the north end of Lake Albert with a population of some 30,000.

If you have further information about Lake Albert whether it be reviews, places of interest or accommodation contact us using our contact form.

Now check out the main tourist attractions in the park in the above video.

Fort Portal is just under 200 miles from Uganda’s capital Kampala and has a population of some 55,000. Fort Portal is named after Sir Gerald Herbert Portal who was appointed as British Special Commissioner to East Africa in 1892 and visited Uganda to establish whether the area should become a British Protectorate to replace the failing Imperial British East Africa Company.

His recommendation that it should become a protectorate was accepted by the British Government however he died at the age of 36yrs old six months before his recommendation became a reality on 18th June 1894. His statue still stands in the town centre.

There is much to see and do when out and about in Fort Portal from a vibrant nightlife with town centre clubs such as Africana and the Forest Bar, and daily markets around the area.

Most however will want to take in Fort Portal’s tourist attractions which range from caves and waterfalls to Royal Places (with Fort Portal being the home of the traditional Toro Kingdom) and tombs to its tea plantations and guided walks that take in crater lakes and with their bubbling sources.

There is good accommodation in and about Fort Portal from which you can use as a base for trips and adventures to Queen Elizabeth National Park, the Bigodi Wetland Sanctuary, and the Kibale forest. Food is plentiful both for those who prefer traditional African food and those who would rather have international food with the Dutchess hotel and restaurant close to the centre of town offering pizzas, burgers etc.

On these pages we hope to provide all you need to know about Fort Portal however if you know of other tourist attractions in Fort Portal get in touch and let us know using our contact form.

Activities and attractions in fort portal – Bigodi is a community based organization which started with a view of uplifting the status and lifestyle of the lower class families of Bigodi village and other communities around. In 2016 is when it started and with four people who trained with Kibale Association for Rural and Environmental Development, found a loop and unauthenticated community walk and derived means, making it more authentic giving scholastic materials, improving households and providing employment to the community guides and demonstrators.

In visiting the Bigodi community you are supporting the community directly and through this it teaches them not to encroach on the protected area encouraging them to conserve for the nearest home of the Chimpanzees the Kibale Forest National Park.

This community based organization offers you opportunities to see six different species of Primates during your walk and over 160 bird species, butterflies, and so many more.

Fort portal can be visited anytime of the year, it is one of the places in Uganda with the best climate all year around.