All you need to know before booking a wildebeest Migration Safari 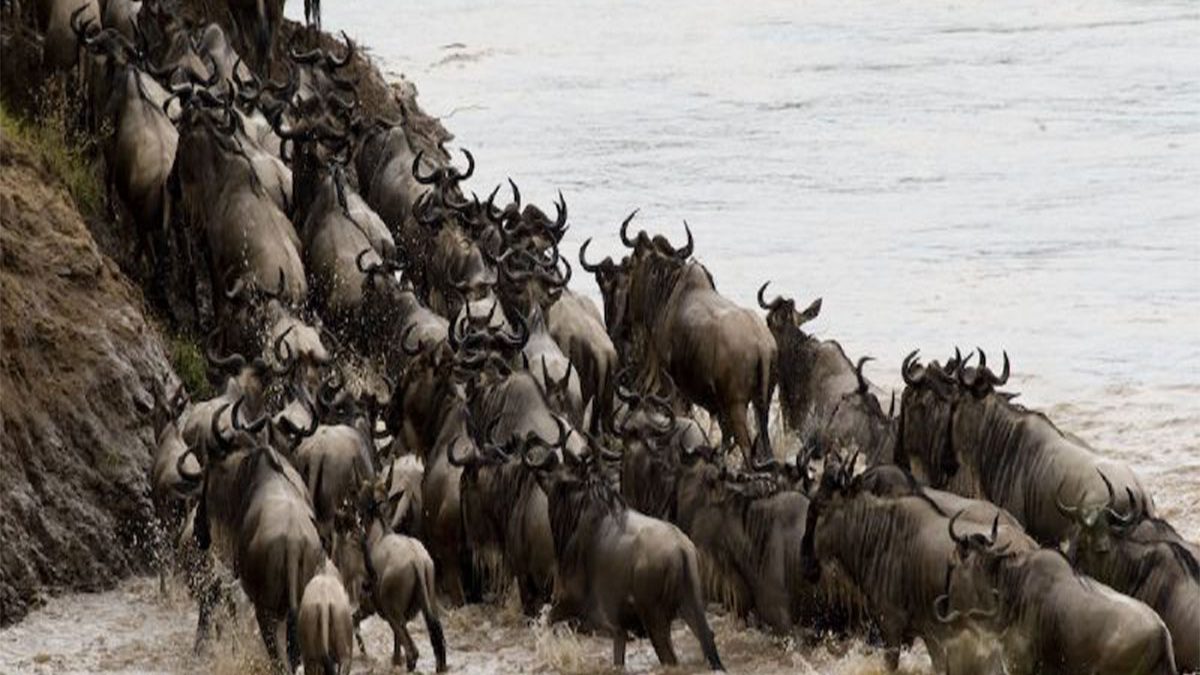 All you need to know before booking a wildebeest migration safari – The ungainly gnu earned the Africans name wildebeest, or “wild beast,” for the menacing appearance presented by its large head, shaggy mane, pointed beard, and sharp, curved horns. The is fact that the wildebeest is better described as a reliable source of food for the truly menacing predators of the African savannah, Lions, Cheetahs, Wild dogs, and Hyenas.

A unique-looking member of the antelope family, wildebeests are fascinating creatures that can only be found in the southern, northern and eastern parts of Africa. Gregarious animals, wildebeests have high production rates and an increasing population rate, making their herds extremely large. While these animals are fascinating to witness during a regular safari, they are undoubtedly more impressive to witness during their annual trek across the Serengeti in the Great Migration. To help you learn more about these beautiful beasts, we’ve put together a list of interesting wildebeest facts.

The blue wildebeest is a member of the antelope family, although its heavy build and disproportionately large forequarters make it look more bovine. Blue wildebeests can reach 8 feet in length, stand 4.5 feet tall at the shoulders and weigh up to 600 pounds. Both males and females grow horns.

Their habitat comprises the grassy plains and open woodlands of Central, Southern, and Eastern Africa, particularly the Serengeti in Tanzania and Kenya. They travel in large herds and are active day and night, grazing constantly.

Their spectacular northward migration in search of greener pastures is dictated by weather patterns, but usually takes place in May or June. It is considered one of the greatest wildlife spectacles on Earth, involving up to 1.5 million wildebeests as well as hundreds of thousands of other animals, including Zebra and Gazelle.

Up to 500,000 calves are born in February and March each year, at the beginning of the rainy season. Calves learn to walk within minutes of birth and within days are able to keep up with the herd. Wildebeests can live to be 20 years old.

All you need to know before booking a wildebeest migration safari – Wildebeest are large African antelopes and belong to the Bovidae family. The word wildebeest comes from the Afrikaans language and translates to wild beast. Another name for the wildebeest is gnu (pronounced “new”).

The Blue Wildebeest live in woodlands, open grasslands and desert areas and can be found in many different reserves in South Africa including the Kruger National Park the Zululand Reserve and other game farms. The blue wildebeest is a dark grey colour with black tails and dark beards. They are grazing animals and are known for their curiosity.

The Black Wildebeest prefer open grasslands. They can be found in the Highveld towards the south of South Africa. Black wildebeests are smaller than their blue relatives and have a brownish black appearance with a distinct white tail.

Both blue and black wildebeest are social animals and live in large herds. Blue Wildebeest often interact with other plains game such as Zebras. These two wild animals eat different parts of the same grass and so there is no need to compete for food. With this, they can coexist peacefully.

Wildebeests are herbivores and only eat vegetation. They prefer grass, but when the grass is hard to find, they will also eat leaves. Wildebeests are a food source for spotted hyenas, Lions, Cheetahs and African Wild dogs.

Gnu herds are always on the search for food and are active day and night. They communicate through sight and smell but are also very vocal. Blue wildebeest males can bellow loud enough that the sound travels up to 2 kilometres.

At the beginning of each year, thousands wildebeest migrate northwards across the Serengeti in Tanzania to the Masai Mara in Kenya. Following the rain, massive herds of wildebeest and other accompanying animals such as zebras, impalas and gazelles search for better grazing opportunities. Known as the Great Migration, this phenomenon takes place over months, where the antelope dodge hungry predators, including big cats and crocodiles.

At the beginning of the migration period between January and March, approximately 400,000 wildebeest calves are born in the southern part of the Serengeti each year.  Astonishingly, calves can run with their mothers within minutes of being born and can reach speed up to 40 mph.

Wildebeest split into subgroups called mega herds to ensure there is enough food for the entire herd. The smaller sub herds follow a slightly different path, while still moving in the same direction as the entire herd.

Wildebeests protect themselves from predators by remaining in large, intimidating groups. Wildebeests are incredibly protective and will bunch together, stamp and even chase predators away when feeling threatened.

Wildebeest herds possess what is known as “swarm intelligence”, meaning that the wildebeest herd systematically explore and overcome an obstacle as one.