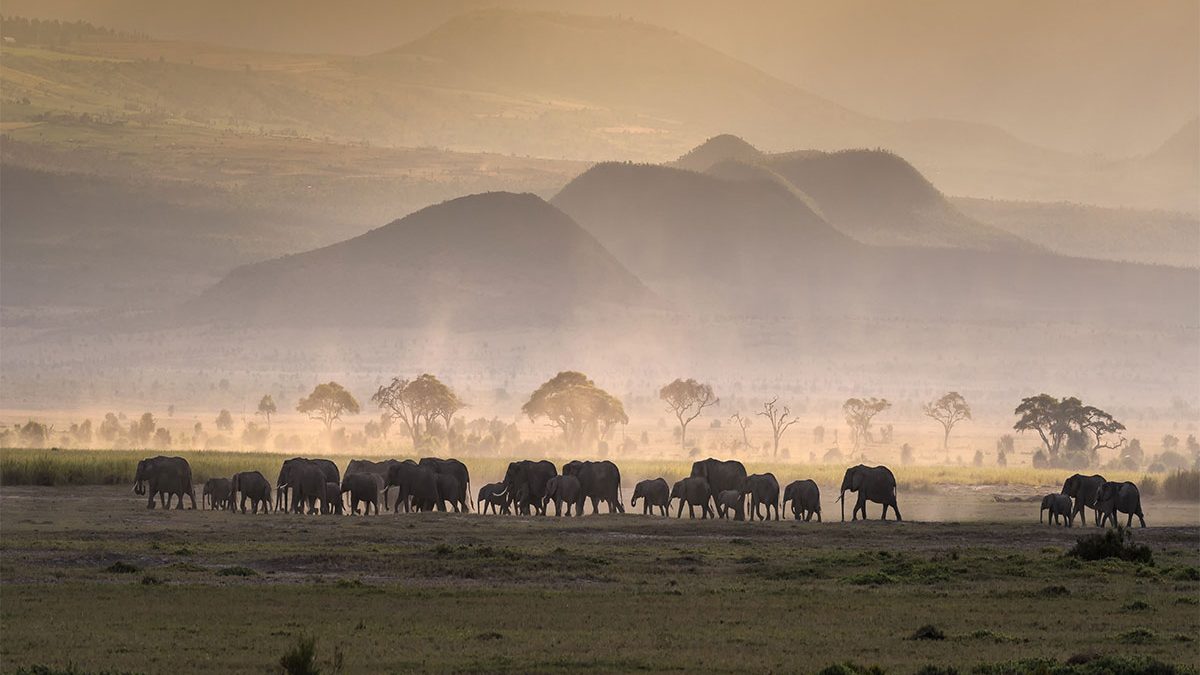 Amboseli national park Kenya – “Home of the African Elephant” Crowned by Mount Kilimanjaro, Africa’s highest peak, the Amboseli National Parks is one of Kenya’s most popular parks. The name “Amboseli” comes from a Maasai word meaning “salty dust“, and it is one of the best places in Africa to view large herds of elephants up close. Nature lovers can explore five different habitats here ranging from the dried-up bed of Lake Amboseli, wetlands with sulphur springs, the savannah and woodlands.  They can also visit the local Maasai community who live around the park and experience their authentic culture.

Amboseli is famous for its big game and its great scenic beauty; the landscape is dominated by the towering Mount Kilimanjaro.

Amboseli boosts of a rich bird life, with over 400 bird species recorded, including the globally threatened Madagascar Pond-Heron, Lesser Flamingo, Lesser Kestrel, and Possibly Africa’s most sought-after bird, the Shoebill which has an a-one-time record in the area and over 40 birds of prey.

The park also has forty-two of the ninety-four species of the Somali-Masai biome that occur in Kenya.

To find Amboseli a very productive bird watching spot, one needs to get there during and just after the October-December rains. This is when local birds are joined by migrants from the Northern hemisphere, sometimes in fairly large numbers.

Amboseli has over 80 different mammals to be found ranging from the tiny (and rarely seen) spectacled elephant shrew to the huge bulk of the African elephant. Few visitors will go home without superb elephant pictures with Kilimanjaro as a backdrop. There are over 400 bird species.

Mount Kilimanjaro; Observation Hill which allows an overall view of the whole park especially the swamps and elephants; Swamp below observation hill hosts many elephants, buffaloes, hippos and a variety of water fowl like pelican; Egyptian goose; contemporary Maasai culture and indigenous lifestyle; herds of elephants.

How to Get to Amboseli national park Kenya.

The main road into the park is from Nairobi via Namanga (240 km) on the Nairobi-Arusha Road, via Meshanani Gate. The road is tarmacked up to Namanga but is marram from Namanga to Meshanani Gate (75km).

The other road is via Emali (228 km) on the Nairobi- Mombasa Road. The road is tarmacked up to Emali and marram from Emali to Remito Gate (64 km) Access from Mombasa is mainly through Tsavo West via Kimana (Olkelunyiet) Gate.

By Air: The Park has an airstrip at Empusel gate. There is also an airstrip for light aircraft at the Park Headquarters (Olekelunyiet). Other airstrips exist at Kilimanjaro Buffalo Lodge and Namanga town.

Where to stay in Amboseli national park.

Amboseli has a range of accommodation to suit all budgets, tastes and interests. There are very basic campsites where one can pitch a tent and sleep under canvas in the wild, well appointed safari lodges, luxury tented camps with large, fully furnished tents, small private camps for your exclusive use and much, much, more.

The dry season from June to October is generally considered the best time to see wildlife in Amboseli; with little rain falling wildlife retreats to the park’s swamps where underground water from Kilimanjaro wells up permanently year-round.