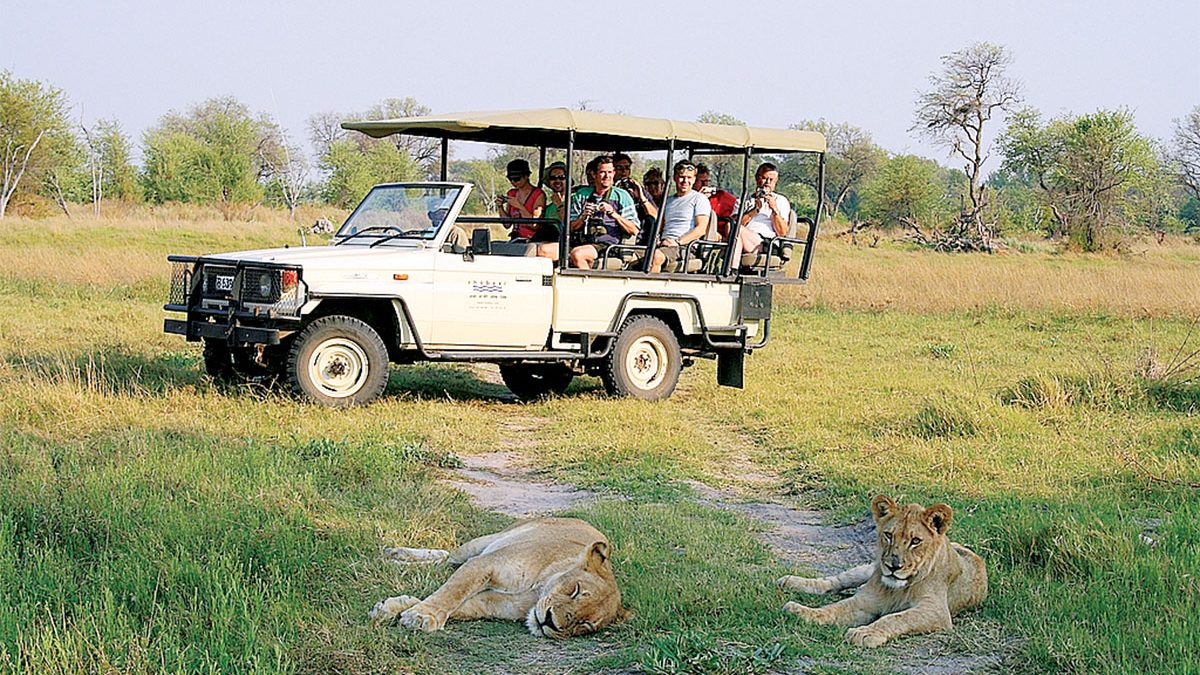 Chobe National Park Botswana – witnesses staggering concentrations of up to 50,000 elephant. The flood plain of the Chobe River provides a stunning backdrop for these vast herds and in the hills overlooking the plains, there are other treats such as roan, sable and one of the highest concentrations of Greater kudu in Africa.

One of the things that make Chobe so special is the opportunity to experience and enjoy this magnificent part of Africa from a number of different perspectives through the range of activities that are available. Whether in a vehicle, on foot or on the water, Chobe has a number of offerings to give you a thorough and unforgettable taste of the African bush.

It probably goes without saying that heading out on at least one game drive whilst in Chobe National Park is an absolute must. This is generally the best way to see Chobe’s predators, as well as the undulating and striking landscapes and ecosystems that stretch away from the river. You can self-drive, or most lodges include morning game drives in their rates.

Chobe is particularly famous for its sunset boat cruises, a special favorite for birders and photographers which also gives you the perfect setting for a nice, cold sundowner or two. It’s the best way to see large herds of elephants crossing the river too, as well as the river’s sizeable hippo and crocodile population. 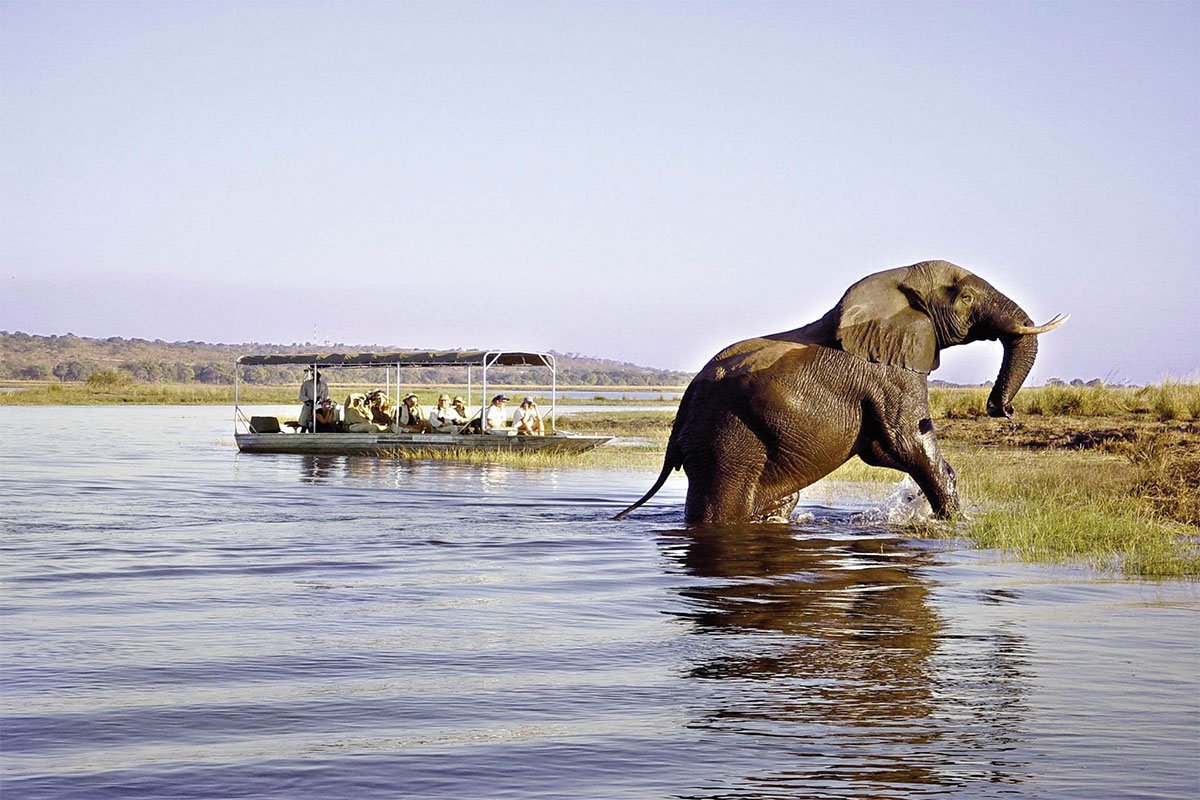 For both the budding amateur and the seasoned pro, Africa travel specialist gears your Chobe experience around spectacular wildlife photo opportunities and provides the means by which to maximize those opportunities. Every client is provided with state of the art cameras and lenses and guided by seasoned photographers in custom-designed boats and vehicles.

The Chobe is blessed with an abundance of fish and is a very popular fishing destination. A number of operators and lodges can organize leisurely fishing trips and provide equipment and an experienced guide. This is a great place to catch the legendary Tiger fish as well as several species of bream, all of which are great on the braai.

There is no better way to get up close and personal with the African bush than on a guided bush walk. A small handful of lodges offer this unique and intimate activity in the picturesque Chobe Forest Reserve enclave of the national park. This is wild Africa at its most unadulterated.

For those seeking a rare insight into the interesting cultural heritage of the region, this activity takes you across the Chobe River by wooden makoro canoe and then on foot into a handful of traditional tribal villages located on the Namibian side of the bank.

How to get to Chobe National Park Botswana

GETTING TO CHOBE BY AIR

A few flight possibilities are available for those who want to fly to Chobe National Park. South African Airways offers flights to some airports in the vicinity of the reserve. From OR Tambo Johannesburg International Airport in South Arfrica it is possible to travel to Kasane Airport (BBK), Livingstone Airport (LVI) in Zambia and Victoria Falls Airport (VFA) in Zimbabwe. Another possibility is to travel from Botswana’s capital city Gabarone to Kaanse. From all airports it is possible to continue the journey to your Chobe safari lodge by road transfer. We recommend flying directly from Johannesburg to Kasane, as this is the nearest airport and is serviced daily. The road transfer from Kasanse Airport to your destination lodge depends on the accommodation location.

GET READY FOR TAKEOFF

The most exciting start of a Chobe safari, is by arriving at your lodge with a so called ‘lodge hop’. This is an air transfer made by means of a small aircraft. These short charter flights can be arranged from Kasane Airport, Livingstone Airport and Victoria Falls. Most lodges located in Chobe National Park have an aistrip close to the lodge. With a lodge hop, your safari adventure will have an unforgettable takeoff. Flights are very scenic, as small aircrafts stay at a low altitude. Look out of the small window for an overview of the wonderful Chobe National Park. Please note that lodge hops are not required for lodges located in Kasane or on the Chobe Waterfront.

GETTING TO CHOBE BY ROAD

Chobe National Park is accessible when travelling by (rental) vehicle. A 4×4 vehicle is required.

Chobe, in northern Botswana, is a true year-round destination with its peak game viewing time between May and October. But there’s more to it than that…

Chobe National Park is one of Africa’s greatest game parks. It’s the third largest in Botswana after the Central Kalahari Game Reserve and the Gemsbok National Park. Chobe is well known for its high density of elephant, with an estimated population of 120 000 animals, making for endless opportunities to observe these magnificent creatures as they move through the bush in search of food or at play in the rivers and other water sources. At times you can get quite close to some of the elephant, or watch the young bulls sparring, so make sure you have your camera ready!

Chobe is an all year safari destination, but if we have to pick a peak game viewing season it is during the dry months from May to October. This is also the easiest and most comfortable time to travel, but also the busiest in terms of tourists. The dry roads are easy to navigate, although there are some sandy roads which can present a bit more of a challenge. The trees and shrubs have thinned out making it easier to spot wildlife, and the daytime temperatures are pleasant although it can get very cold at night.

Apart from the huge numbers of elephant you can also see buffalo, zebra, lion, leopard, hyena and cheetah, and antelope species, with roan and sable, puku, tsessebe, eland, red lechwe, waterbuck, Chobe bushbuck, and of course giraffe, kudu, warthog, wildebeest and impala. There are also crocodiles, and huge pods of hippo in the rivers.

During the dry season, the wildlife can be found congregating around the rivers and other permanent and available water sources, having made their way from the dry interior. The riverfront strip running along the north of the reserve is home to the largest wildlife concentrations in the park. Excellent game viewing can be done either by vehicle along the river, or by boat on a safari cruise on the river.

But Don’t Ignore the Green Season

The wet season usually brings rain from November to March, transforming the dry areas to lush, green landscapes. The game starts wondering further afield from the rivers and waterholes, but there is still good game viewing along the water as well as some of the best birding opportunities. The wet season is also when all the animals start having their babies which they have been carrying through the winter, so there are plenty of baby animals to pull at the heart-strings.

The temperature and humidity rise considerably getting as hot as 40 degrees Celsius during the day. The afternoon thunderstorms and cloud bursts can make some of the untarred roads impassable. The heaviest rains usually occur between December and February, sometimes resulting in flooded areas during these times. Bear in mind that Chobe lies in a malarial belt, and mosquitoes are at their most prevalent during this season.

More than 450 species of bird have been recorded at Chobe National Park, between the resident species and the migrants, the wet season is the best time to spot them – bee-eaters, African skimmers, raptors, fish eagles, kingfishers, storks and cranes, wildfowl and waders, pelicans, owls, vultures, gulls and terns, warblers, robins, swallows, swifts and martins, and even the Pel’s fishing owl.

The Savuti Marsh is transformed by the rains, from a parched landscape to lush grassland which attract the herbivores in their thousands. Zebra and wildebeest are particularly prevalent, passing through on their annual migration from the southern Linyati wetlands. They birth their young before moving on, taking advantage of the new grasses for feeding.

The fishing opportunities at the river lodges in Chobe are excellent all year round. Expect tiger fish, bream, catfish, African Pike and upper Zambezi yellowfish – there are up to 20 species of edible fish to be found in this park, so come prepared with your gear.