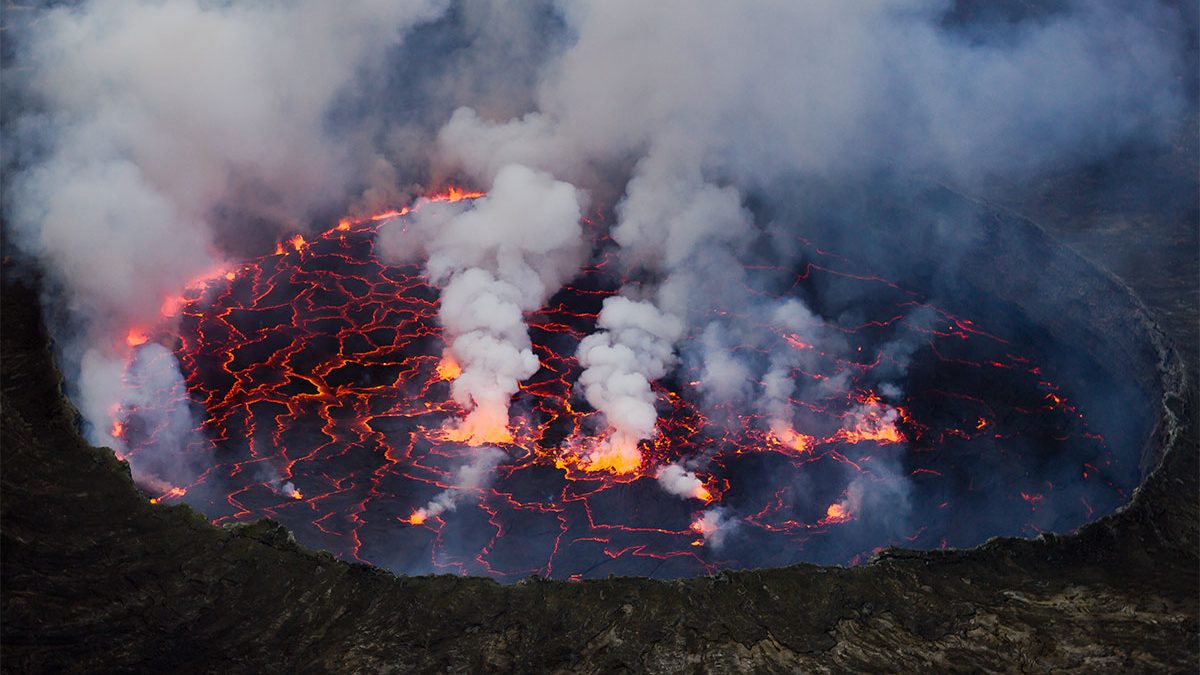 Climbing mount Nyiragongo Volcano – Mountain Nyiragongo is the world’s deadliest volcano and one of the largest most spectacular active volcanoes in the world with a caldera summit having a diameter of 1.2 kilometers with steep-sided walls making it the largest active lava lake in the world. Today the volcano stands at the height of 3,470 meters high and has seen several volcano actions causing lava to flow downhill to the neighboring Goma settlements found on the foothills. Nyiragongo today is listed as one of the deadliest and most dangerous volcanoes in the world

Where is Mountain Nyiragongo Located?

Nyiragongo Volcano is located within the Virunga National Park in the Democratic Republic of Congo approximately 20 km north of the town of Goma on the border of Congo and Rwanda, and today it is among the most active volcanoes worldwide. it is at a height of more than 11,000 feet and its caldera peak or calls the magma chamber is nearly 1 mile wide and it’s in there that a deep lake of lava is found. The mountain has not been exhaustively studied by scientists because of political unrest with the neighboring area

Is it safe to visit Mountain Nyiragongo?

considering the various Mount Nyiragongo eruptions that this volcano has experienced over the years including the recent one in 2002, one would consider that this is among the few places on Earth that are not inhibited by people since it has the largest fluid lava lake in the world. surprisingly the lower slopes of Mount Nyiragongo are populated with a large number of people living in Village settlements while its densely forested lower slopes are habitats to various animals among which are Chimpanzees, bushbucks, various types of monkeys, different bird species, and the unique 3 horned chameleons.

This mountain releases very heavy fumes that envelop the atmosphere over the peak, with the smoke comprising of fluid lave that consists of different chemicals including nephilinite and melilite that form a type of rock that is rich in alkaline. The Nyiragongo volcanic field is encompassed by other volcanic fields that include seven other volcanoes including Mikeno and Karisumbi; as well as Lake Kivu. Currently, the Volcanic Lake is surrounded by a ring and the lava levels occasionally swell beyond this ring and flow down to the caldera floor. Because of the steep-sided nature of Mount Nyiragongo Volcano slopes the fluid lava usually flows downhill at a high speed above sixty meters per hour (60 mph) which makes it extremely challenging for the people and the wildlife around to escape from this lava during instances of overflow through the crater walls.

How deep is Nyiragongo Crater Lake?

the depths of the crater remain unknown as its changes depending on the amount of magma emitted from below, however, it is estimated to be at a depth of 600 meters. Within the crater are several platforms that were formed by the previous lava levels, with the first platform closest to the rim estimated to be 20 meters from the top room and it was formed by the lava levels back in 1973. Below that is another platform which is about 40 meters lower and was formed in 1995 by the lava lake which drained to the neighboring area after it erupted in 2002. Present the caldera lava flow is estimated to be between 430 meters to 410 meters below from the ring of the volcano.

When did the Congo Nyiragongo Volcano become active?

The exact time when this volcano became active remains unknown however occasional bubbling, discharge of fire, clouds of smoke and even bursting of the crater walls for the lava to flow downhill have happened for several years although the first recording of the eruption was recorded in 1882

How many times does Mount Nyiragongo erupt?

The Nyiragongo Volcano is up-to-date still active and it is believed to have erupted more than 34 times since way back in 1882, with the most recent eruption having occurred in 2002 and claimed 147 lives. Today volcano activity is still happening although it is confined within the crater with the level of the lava slowly swelling up inside the crater. Back in 1977 the walls of this crater burst open and the molten lava flowed downhill and within less than one hour reached the nearby villages flowing at a speed of approximately 60 mph. the death toll that was officially reported was seventy (70) however it’s alleged that the number was far higher than this. One would wonder why the Nyiragongo lava flows very fast.

well unlike the usual lava Flow the presence of volcanic rock rich in alkaline as well as melilite nephelinite on this mountain, form an exceptionally fluid consistency that makes the lava move at a great speed such that it cannot be easily overcome by anything it finds in its way. The eruption in 1977 happened when the crater Lake was at a depth of 10,700 feet – the deepest depth ever documented, however as earlier mentioned the depth of the Lake depends on one of the amounts of Lava in it.

How to get to Mount Nyiragongo?

The journey to Mount Nyiragongo begins in Gisenyi town found in Rwanda and it takes about 30 minutes’ drive to cross the border into Goma town in Congo which is the nearest to this mountain. From Goma, it is approximately 9 miles to the volcano and it is here that all adventures to climbing Mount Nyiragongo Volcano are based.

Climbing Mount Nyiragongo Volcano normally begin in the early morning and hikers are encouraged to be at the starting point by 9 a.m. it is for that reason that you are highly advised to spend the night in Goma town to give you ample time to prepare adequately for your hike.

There are a few things that you will be required to have to hike the mountain and these include a Yellow Fever Vaccination Certificate as proof of receiving the vaccine shot you will also need a climbing permit. This you can book directly at the National Park or through us at Great Adventure Safaris who may give you around cost figure of all services as well as your meals.

Do i need to be Physically Fit to climb Mount Nyiragongo?

The most recommended tour up the mountain takes just 3 days for that reason you don’t have to be athletic to ascend the mountain, however good health condition is required to successfully make it to the summit. Also, keep in mind that the mountain surface is not generally even as it is characterized by volcano rocks, and the altitude well is generally high so signs like dizziness, feeling tired as well as losing courage are likely to happen.

Always keep in mind that the peak is at a height of 11,400 feet so the choice will be yours either to hike slowly or at a fast pace. With the Porter giving you luggage assistance, the success rate registered on Mount Nyiragongo is very high.

Change of clothes: during the wet season that normally runs from March to May and again in November, the mountain receives large amounts of rainfall and for that reason, you are highly advised to pack a change of clothes.

A sleeping bag: a sleeping bag is another highly advises item as this comes in handy especially as you sleep on the thin and not insulated mattresses that are provided in the huts up the mountain. 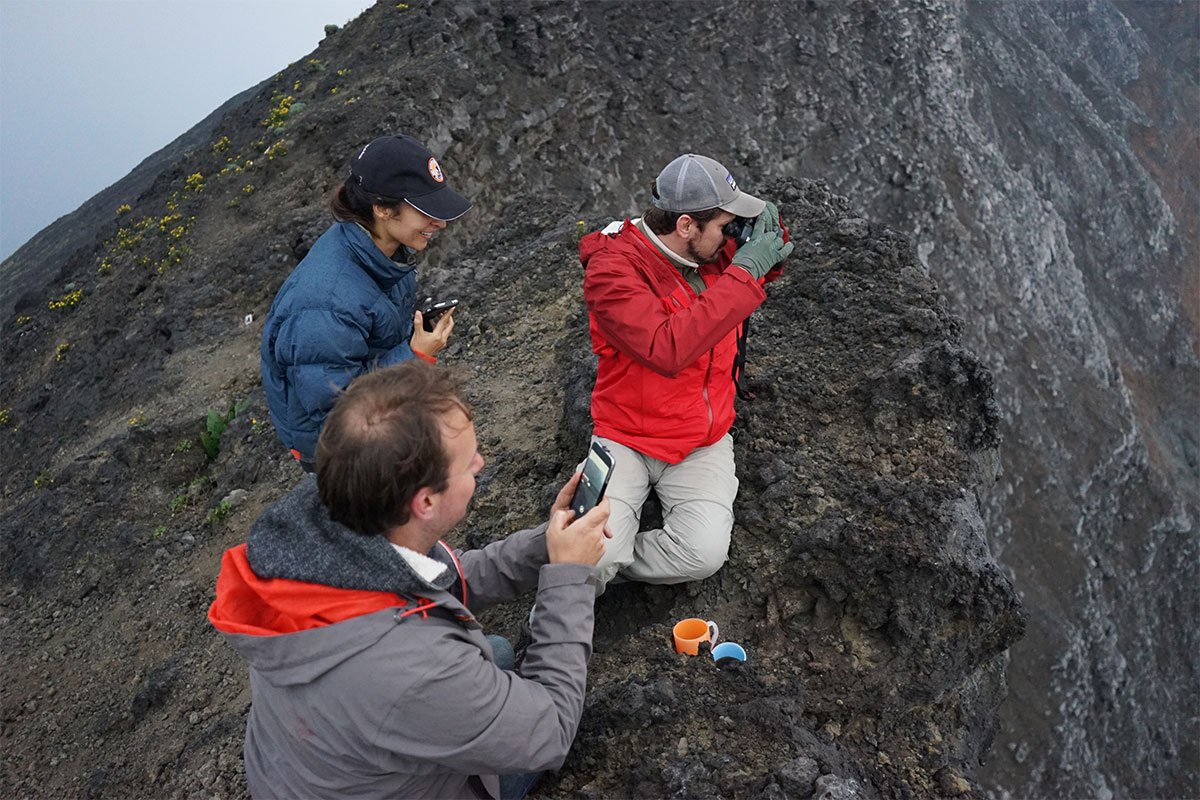 What to know before climbing Mount Nyiragongo Volcano? 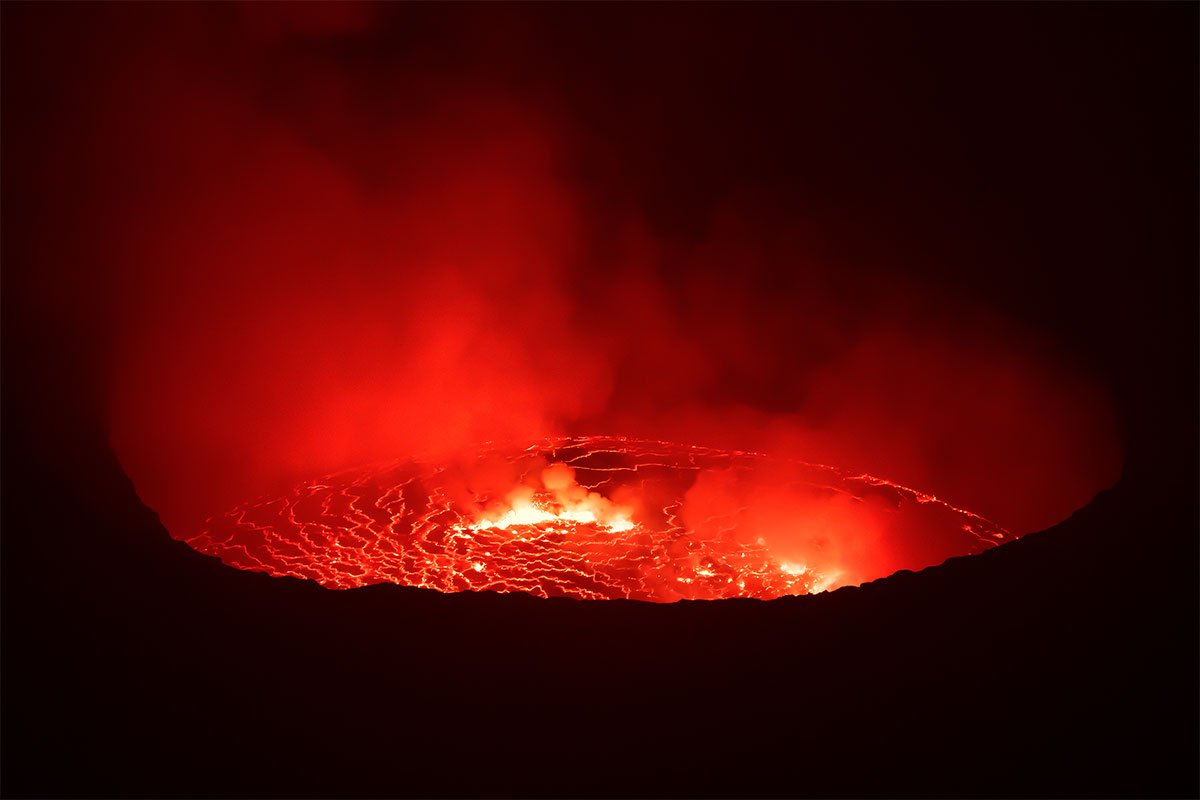 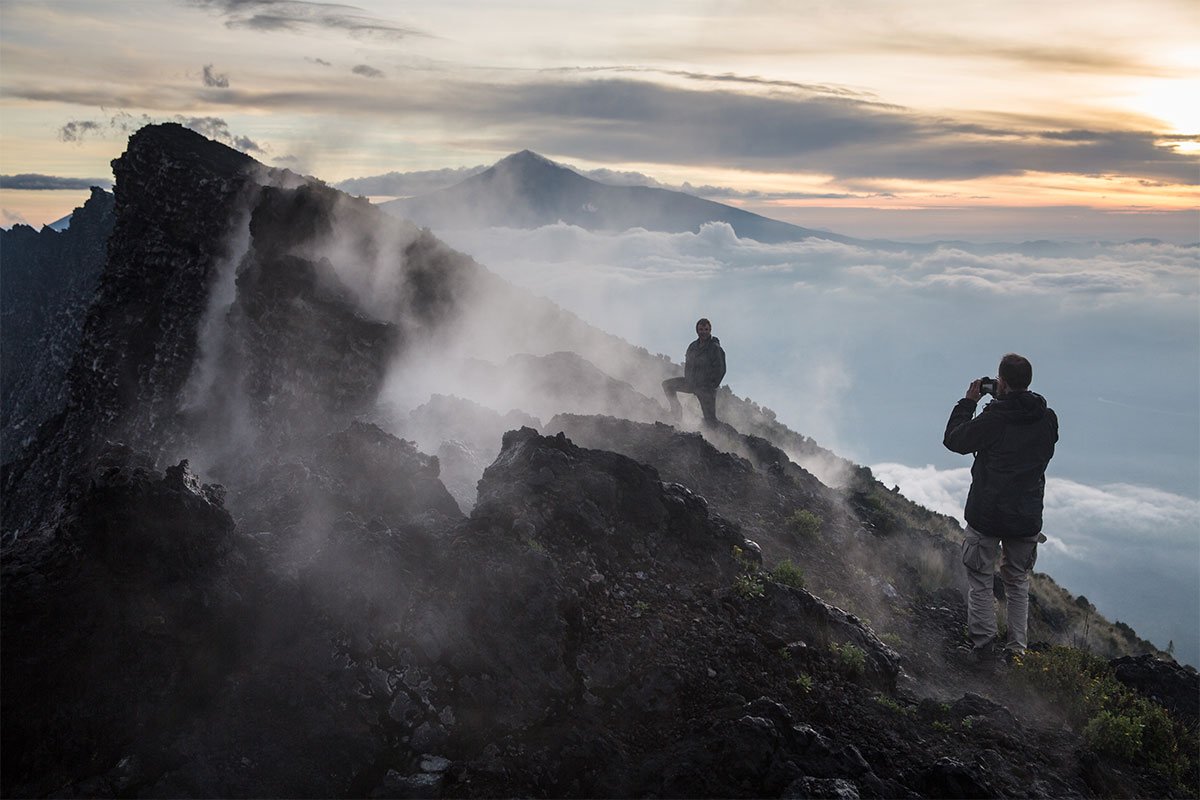 What to pack for Nyiragongo Volcano hike? 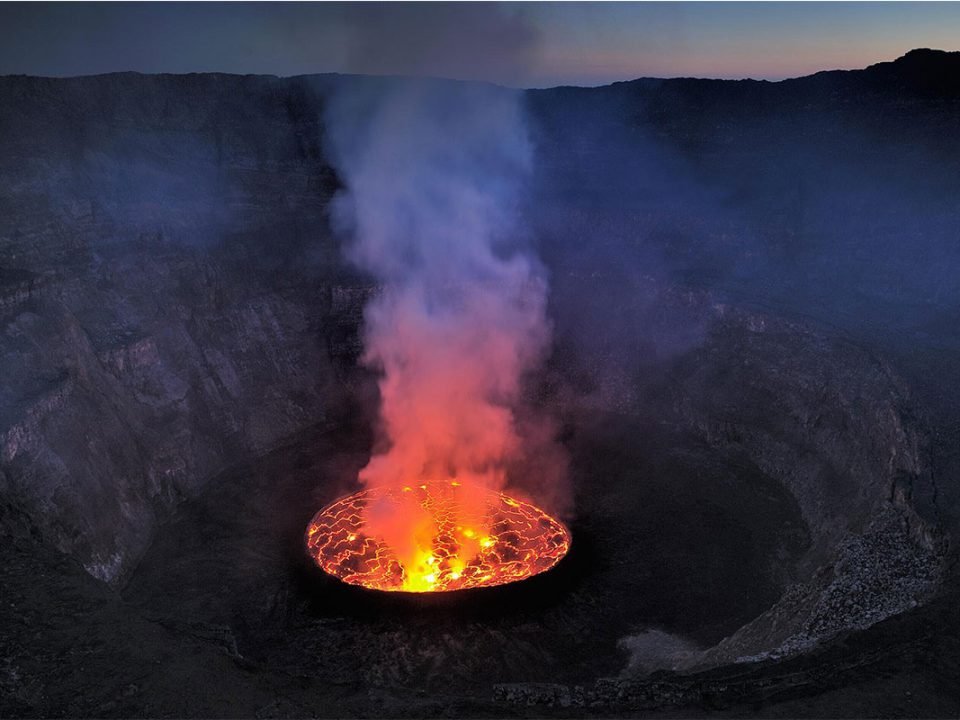 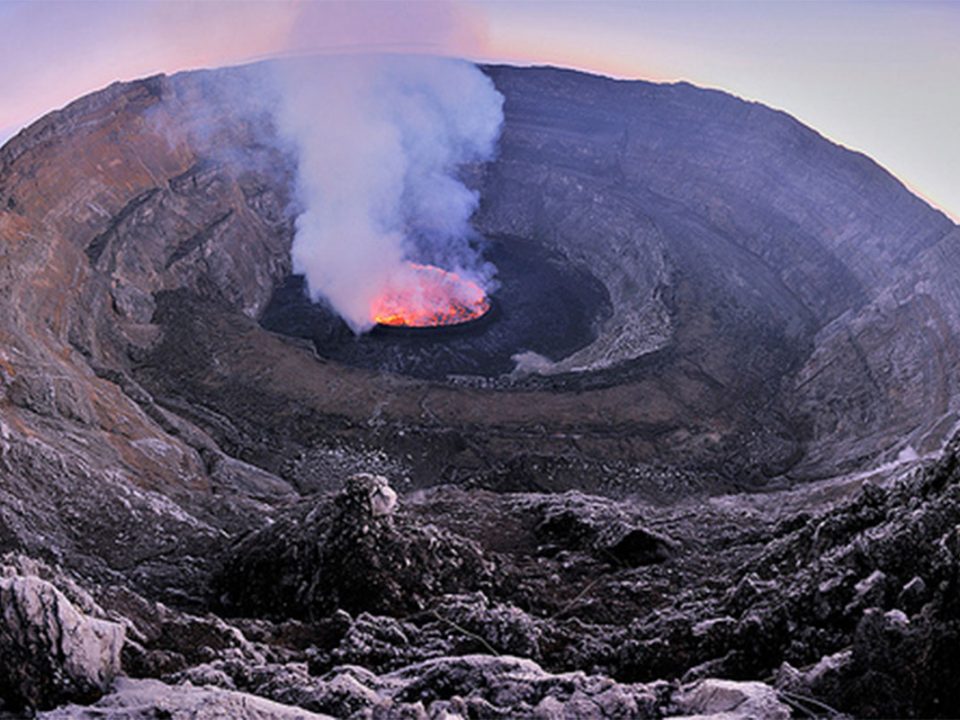 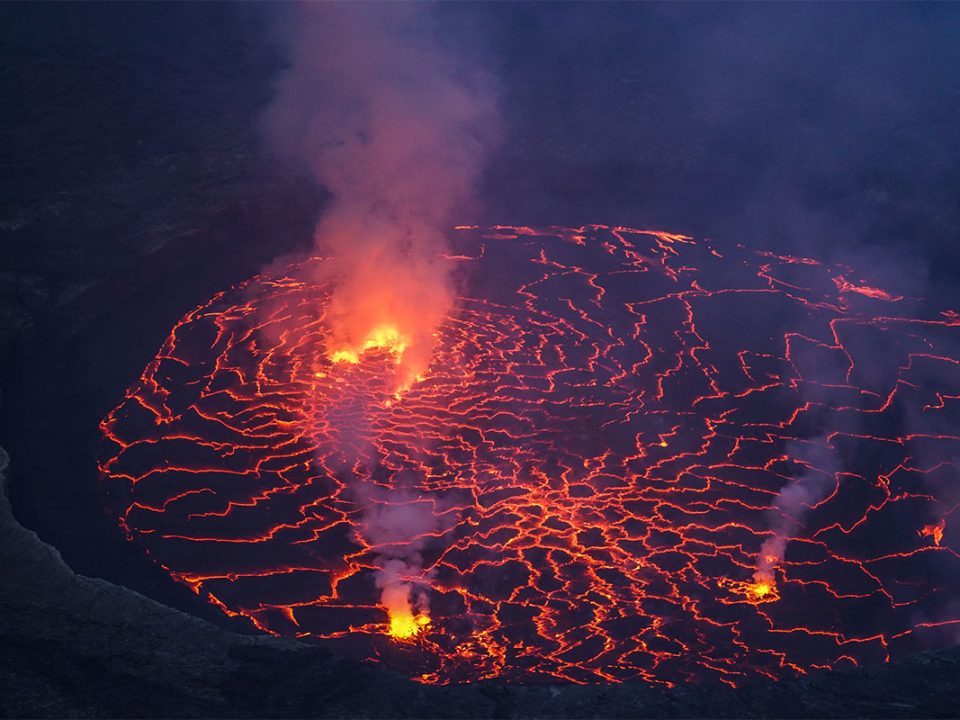