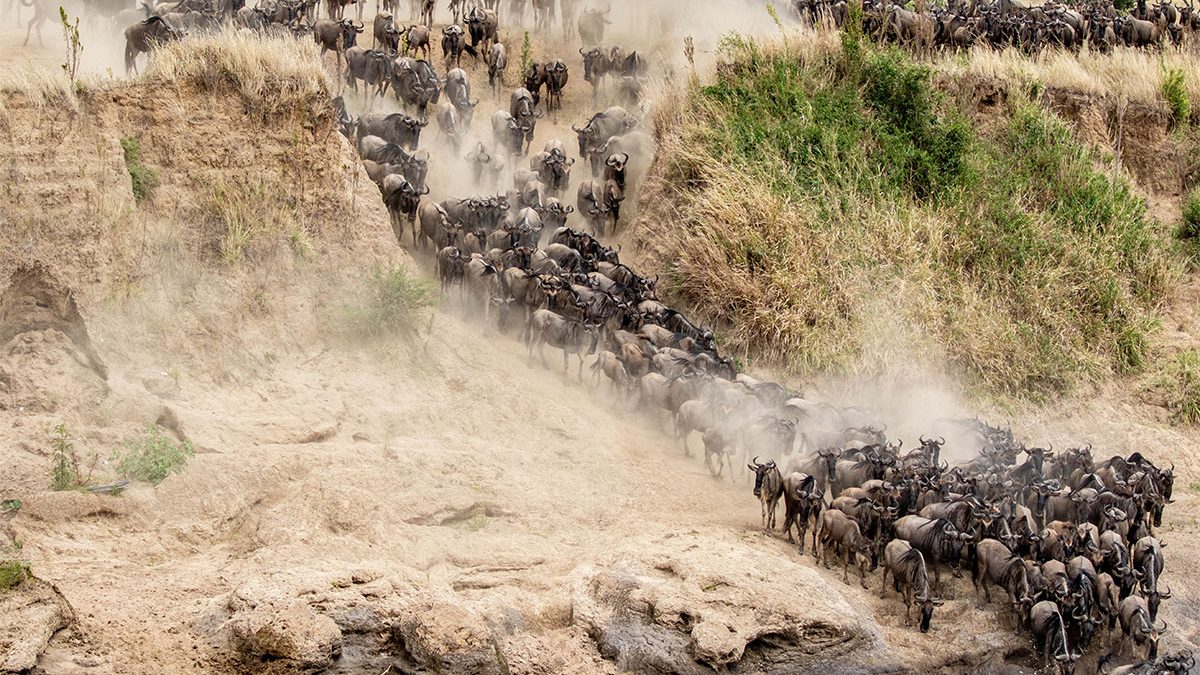 Masai Mara wildebeest migration safari –  Great Wildebeest Migration 2021-2022 in the plains of East Africa is one of the World’s most thrilling, intriguing and spectacular displays of wildlife behaviour and adventure experience. Great Adventure Safaris’  travellers place great timing importance on having the best front row seats to see the event. We share our personal knowledge, local experience and expertise of the Great Migration in Masai-Mara National Reserve, Great Adventure Safaris helps you have a memorable experience on your African safari to Kenya’s pristine wilderness outbreak.  Masai-Mara is the most noted location of the wildebeest migration due to its famed Mara River crossings, and this has led to some misunderstandings about the migration itself. The migration is an on-going movement of animals that takes place throughout the year.

The migration occurs within an area that is known as the “Serengeti ecosystem.” The 40,000-square mile area is defined by Masai-Mara National Reserve in the north and, in the south, Ndutu, Ngorongoro Conservation Area and Maswa Game Reserve in Tanzania. The central, Eastern and Western areas include Grumeti Reserve, Loliondo, the official Serengeti National Park including part of southern expanse of Kusini and other protected areas. The migration is not a singular, isolated event. Instead, the phrase describes the constant movement of over 1.5 million wildebeests and hundreds of thousands of Zebras, as well as Elands and Gazelles. With other wildlife, the purpose of the movement is the search for pasture and water. When supplies of these vital resources are depleted in one area, the animals move to another area where water, grasses and other food sources are plentiful.

Masai Mara wildebeest migration safari – Owing to the massive size of the herds, the Great Wildebeest Migration arriving from Serengeti National Park stands out from other migratory movements. How the animals know where to find food and water remains a mystery largely, but researchers have developed some hypotheses about the behaviour of these animals. Most evidence indicates that weather patterns and the cycle of the rainy and dry seasons have the greatest influence on the wildlife movement. Because rainfall and weather are somewhat unpredictable, there is no way to calculate concretely where the animals will be at any point in the year, nor how long they will remain in one area. A reliable appraisal of their movement is only possible by studying historical data of previous migrations years. Great Adventure Safaris works closely with strategic camps and lodges in Masai-Mara and Serengeti to give its guests a high-quality African plains safari experience, especially those who desire a personal viewing of the varied facets of the migration.

One of the most requested events in the migration is the arrival crossing of the Mara River that occurs around late July to August with parts of September and again on their return south, around the last two weeks of October through early November. These are the best times to track and see the annual wildebeest migration in Masai-Mara. While the sight of masses of animals thundering across the open plains is spectacular, the Mara River crossing will take you through a range of emotions awe, anticipation, heartache, inspiration, excitement and much more. The crossing is the subject of many documentary films from the BBC to the National Geographic, but even superb filmmaking cannot give you the experience of being on-site. Throngs of wildebeests gather on ledges above the River, and you can sense their urgency and hesitation. The energy in the air is palpable. As you watch in silence, the wildebeests seem to be gathering their courage, and on some days, they leave the river’s edge and disperse across the savannah to graze.

The wildebeests once again stand above the River, eyes wide; breath laboured each animal vying for a position that gives the safest and surest path to the water and the opposite bank. Hours can pass while conversing with your guide as the wildebeests nervously watch the water for crocodiles. Finally, with no apparent trigger, a few animals rush toward the water, with thousands following close behind along with Zebras, Elands and Gazelles. Your excitement quickly turns to fear. You know that time is of the essence crocodiles are moving toward the slower and smaller wildebeests. Snapping jaws are not the only threat, though, as the current of the Mara River acts with greater unrelenting ferocity, often ending more life than the predators. Your heart breaks for the younger calves that are simply too tired and inexperienced to survive the gantlet.

Nonetheless, you watch as one-by-one, the strongest and most determined reach the other side, and you feel a great sense of relief and joy. Few are stopped short by prowling and stalking predators like Lions, Leopards, Cheetahs, and Hyenas waiting around the upper banks of the Mara River for an easy catch on arrival. For those animals that reach the greater plains of Masai-Mara, life is easier but only for a relatively short time, due to its size (almost 1/15th of the Serengeti National Park in Tanzania), pasture and water supply slowly fade, and the wildebeests and its herbivore partners must continue their on-going return journey with the crossing of the Mara River again. The rains return to other areas of the ecosystem, and the Gnus, Zebras, Gazelles and Elands continue their transitory journey to the prime grazing grounds in the Northern and Eastern Serengeti around the middle of October through early November.Contact Great Adventure Safaris  to book Masai Mara wildebeest migration safari for 2021 – 2022 combined with Gorilla tracking safaris in Uganda and rwanda