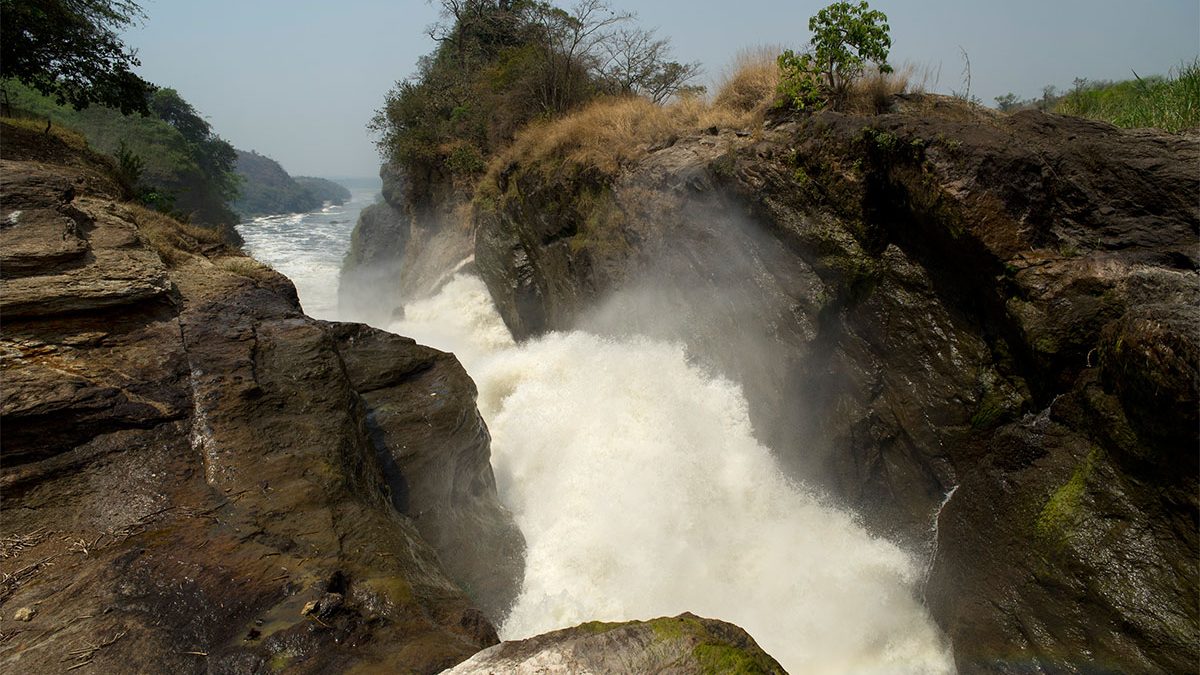 Victoria Nile in Uganda – The mighty Lake Victoria was thought for a long time to be the source of the River Nile. Waters from the large lake leave by the Victoria Nile to head north to join the Albert Nile in northern Uganda. When the water leaves the massive Lake Victoria, it does so in a spectacular fashion. The water pours out of the lake at the Ripon Falls, also known as Owen Falls Dam, in Uganda. It then goes by the Victoria Nile to Lake Kyoga before joining the Albert Nile. The lake itself is shared by three countries of Uganda, Tanzania, and Kenya. The headwaters for the streams that feed the lake, however, originate from the mountains of Rwanda and Burundi.

Victoria Nile  in Uganda that forms the upper section of the Nile River, flowing some 300 miles (480 km). It issues from the northern end of Lake Victoria and Ripon Falls (now submerged), west of Jinja city, and flows northwest over the Nalubaale and Kiira dams at Owen Falls Dam through Lake Kyoga and past Masindi Port and Atura. In its lower course the Victoria Nile is impeded by a series of rapids culminating in the Murchison Falls on the edge of the Western Rift Valley. At the northern end of Lake Albert it forms a swampy estuary. Navigation is possible only on Lake Kyoga between Namasagali and Masindi Port.

The White Nile is a River in Africa, one of the two main tributaries of the River Nile. The name comes from colouring due to clay carried in the water.

In the strict meaning, “White Nile” refers to the River formed at the confluence of the Bahr al Jabal and Bahr el Ghazal Rivers. In the wider sense, “White Nile” refers to all the stretches of River draining from Lake Victoria through to the merger with the Blue Nile. This higher stretches being named the “Victoria Nile” (via Lake Kyoga to Lake Albert), the “Albert Nile” (to the South Sudan border) and then the “Mountain Nile” or “Bahr-al-Jabal” “White Nile” may sometimes include the headwaters of Lake Victoria, the most remote of which being 2,300 miles (3,700 km) from the Blue Nile.

The 19th-century search by Europeans for the source of the Nile was mainly focused on the White Nile, which disappeared into the depths of what was then known as “Darkest Africa”. The White Nile’s true source was not discovered until 1937, when the German explorer Burkhart Waldecker traced it to a stream in Rutovu at the base of Mount Kikizi.

The White Nile in Uganda goes under the name of “Victoria Nile” from Lake Victoria via Lake Kyoga to Lake Albert, and then as the “Albert Nile” from there to the border with South Sudan.

The Victoria Nile starts at the outlet of Lake Victoria, at Jinja city of Uganda, on the northern shore of the lake. Downstream from the Nalubaale Power Station and the Kiira Power Station at the outlet of the Lake Victoria, the River goes over Bujagali Falls about 15 kilometres (9.3 mi) downstream from Jinja city. The River then flows northwest through Uganda to Lake Kyoga  in the centre of the country, thence west to Lake Albert.

At Karuma Falls the River flows under Karuma Bridge at the south-eastern corner of Murchison Falls National Park. During much of the insurgency of the Lord’s Resistance Army, Karuma Bridge, built in 1963 to help the cotton industry, was the key stop on the way to Gulu, where vehicles gathered in convoys before being provided with a military escort for the final run north. In 2009, the Government of Uganda announced plans to construct a 750-megawatt hydropower project several kilometres north of the bridge, which was scheduled for completion in 2016. The World Bank had approved funding a smaller 200-megawatt power plant, but Uganda opted for a larger project, which the Ugandans will fund internally, if necessary.

Just before entering Lake Albert, the River is compressed into a passage just seven meters wide at Murchison Falls, marking its entry into the western branch of the East African Rift. The river then flows into Lake Albert opposite the Blue Mountains in the Democratic Republic of Congo. The stretch of river from Lake Kyoga to Lake Albert is sometimes called the “Kyoga Nile

The River draining from Lake Albert to the north is called the “Albert Nile”. It separates the West Nile sub-region of Uganda from the rest of the country. A bridge passes over the Albert Nile near its inlet in Nebbi district but no other bridge over this section has been built. A ferry connects the roads between Adjumani and Moyo and navigation of the river is otherwise done by small boat or canoe.

From Nimule in South Sudan, close to the border with Uganda, the river becomes known as the “Mountain Nile” or “Baḥr al-Jabal”, literally Mountain River” or “River of the Mountain”. The Southern Sudanese state of Central Equatorial through which the river flows was known as Bahr al-Jabal until 2006.

The southern stretch of the river encounters several rapids before reaching the Sudan plain and the vast swamp of the Sudd. It makes its way to Lake No, where it merges with the Bahr el Ghazal and there forms the White Nile. An anabranch River called Bahr Zeraf flows out of the Bahr al-Jabal at and flows through the Sudd, to eventually join the White Nile. This Mountain Nile cascades through narrow gorges and over a series of rapids that includes the Fula (Fola) Rapids.

To some people, the White Nile starts at the confluence of the Mountain Nile with the Bahr el Ghazal at Lake No.

The 120 kilometres of White Nile that flow east from Lake No to the mouth of the Sobat, are very gently sloping and hold many swamps and lagoons. When in flood, the Sobat River tributary carries a large amount of sediment, adding greatly to the White Nile’s color.  From South Sudan’s second city Malakal the River runs slowly but swamp-free into Sudan and north to Khartoum. Downstream from Malakal lies on the Kodok the site of the 1898 Fashoda Incident that marked an end to the Scramble for Africa.

In Sudan the River lends its name to the Sudanese state of White Nile before merging with the larger Blue Nile at Khartoum the capital of Sudan, and forming the River Nile. 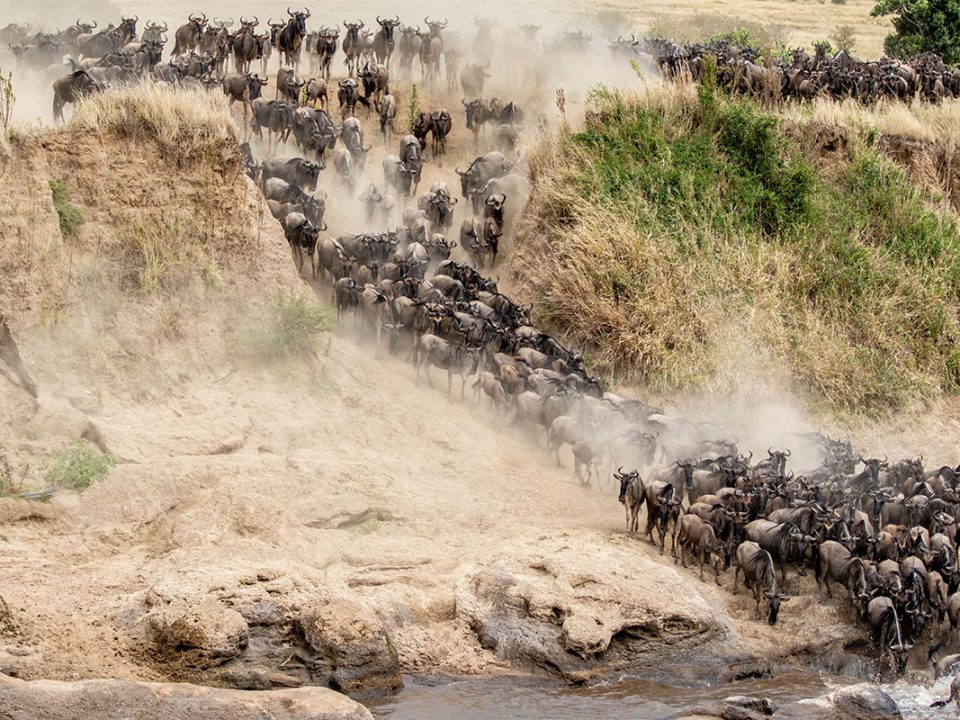