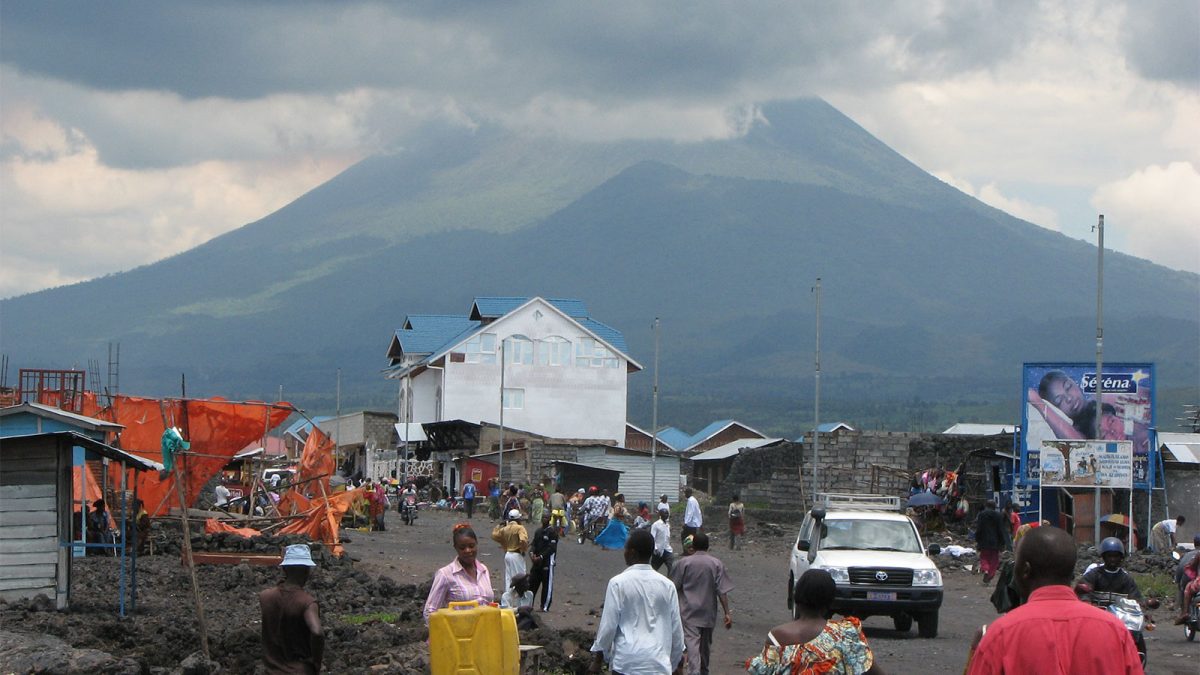 Visit Goma town – Goma town is a city in Kivu province in East of Democratic Republic of Congo. It is located in the Albertine rift valley, on the shores of Lake Kivu, at the border with Rwanda near Gasenyi town. This town is famous for being the closest city or hub to Africa’s most active Volcano Nyiragongo Mountain.

Goma is one of the towns in Democratic Republic of Congo that have badly suffered the 1990 civil unrest  of Congo wars which caused a lot of destruction of property and a lot of refugees left desperate. In 1994 when the Rwandan Genocide was coming to an end, countless numbers of refugees fled into the eastern part of Democratic Republic of Congo and settled in camps in Goma in the camps that were provided by United Nations. A short time after about one million refugees had settled in this centre, the Hutu refugee camp was hit by cholera killing thousands of people. In addition, the main actors of the genocide of Rwanda Patriotic Front moved followed the Hutu who living in the camps of Goma and killed more people as a form of revenge. The town therefore has a lot of Non-Governmental Organisation offices and the military that carry out frequent patrols for security and order.

As the town was recovering from all this, the famous active Nyiragongo Volcano erupted in 2002 where a wide and long flood of lava ran through Goma town at a high speed destroying lots of property and people’s lives. It also crossed part of the runways at Goma Airport, flew towards the shores of Lake Kivu threatening millions of people. After the incident, the volcano became one of the latest remaining active volcanoes in the world.

Since the political situation in Goma has been settled, remains of the lava out of the 2002 eruption are one of the things you ought to see when you travel to Democratic Republic of Congo. Currently, the numbers of tourists crossing Goma for purposes of hiking to Nyiragongo Volcano are increasing.

Getting to Goma Town

Visit Goma town-  can be accessed by both road and flight. Fly to Rwanda at Kigali International Airport and drive to Gisenyi town at Rwanda’s border connecting to Goma in the Democratic Republic of Congo. Alternatively, you may fly direct to Goma at the Airport. Ethiopian Airlines operate direct flights to this destination daily.

Goma town is a hub to the magical attractions in Democratic Republic of Congo. However, before proceeding out of the town you could tour around and view the remains of the 2002 eruption and other main activities.

Mount Nyiragongo is an active volcano standing at 3,470m high. It is a great place to hike to make the most memorable experience after viewing the red glow of the boiling magma in one of the world’s largest lava lake. Spending a night at the shelters on its summit is the most thrilling part of the tour. The hike to the mountain also gives the best scenic views of the valley and other surrounding landscape.

After the adventurous activities of your safari, take a brief break to the tented camp at Tchegera Island on Lake Kivu. The place is very quiet and perfect for relaxation. While at the camp, you have stunning views of the lake, the Nyiragongo Volcano whose boiling magma also lightens up the sky in the night and turns the sky view across to red. Swimming is also allowed at one of the bays which are free from crocodiles.

Where to stay in Goma Town

Visit Goma town – has few but comfortable lodges for one to stay on their safaris to DRC. Some of these include Lac Kivu lodge, Hotel Cap Kivu and Ihusi Hotel, Linda hotel, Karibu Hotel among others.

Due to the large numbers of international expatriate community working with the NGOs in Goma town, there are a number of restaurants that provide high quality services and delicious meals both local and foreign. You may prefer choose to have a meal at one of these; Le Chalet, Au Bon Pain, Nyumbani lounge.

Crossing the border to Goma or flying into Goma town, you are required to have a valid passport whose expiry date should be not be below 6 months from the date of travel. You must also have a valid yellow fever card which is not more than 10 years.