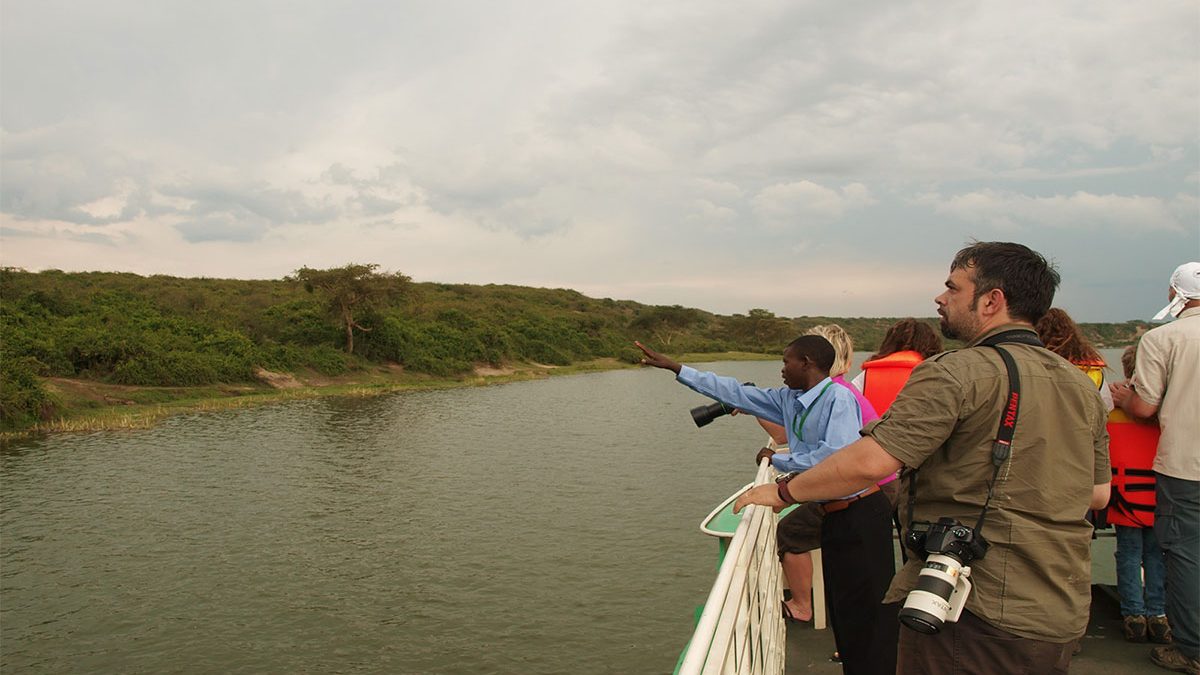 Boat safari on Kazinga channel – Queen Elizabeth national park is known famously for harboring a large number of animal species in the park, the boat cruise is one of the perfect ways to explore the while life at a glance as you sail along the Kazinga channel. The Kazinga Channel in Uganda is one of Queen Elizabeth National Park’s most spectacular sites. A shallow waterway ties the tiny George Lake with the wider Edward Lake. Streams from the Rwenzori Mountains give rise to the water in the stream. Such rivers fill the smaller Lake George and then pass through the canal of Kazinga and into the far larger Lake Albert in Kazinga Channel Queen Elizabeth National Park.

The 32 km wide Kazinga Channel has a large concentration of bats, crocodiles and hippopotamus. Most of the large mammals in Queen Elizabeth National Park are gathered for swimming, eating and grazing on the shores of the river, making it a great spot for watching wildlife. In Queen Elizabeth National Park and the Kazinga River, the hippo community is one of the world’s three highest in the world. Regardless of how many you’ve seen elsewhere, the great numbers here are going to surprise you greatly. Including hippos, it is convenient to see Nile crocodiles, buffaloes, lions, monitor lizards and many antelope species along the Channel shores. During an Africa safari, the Kazinga Channel attracts almost every kind of animal you’d think about. If you’re good, you might even spot lions and leopards drinking by the channel.

The boat safari on Kazinga channel in Queen Elizabeth national park is one of the highlights of all the activities in the park and it’s the most booked activity by the travelers visiting the park. The boat trip in the Kazinga channel is conducted in two sessions, the morning session starts at 8:00 am and for lasts for a period of 3 hours and the afternoon boat starts at 2:00pm and lasts for 3 hours up to 5:00pm in the evening.

Kazinga Channel is one of the best birding locations in Uganda with over 58 species such as African Shoebill, African Skimmers, Black Bee Eaters, Black Crake, Crested Crane, Darters, Great and Long Tailed Cormorants, Great White and Pink-Backed Pelicans, Jacana, Marabou Stork, Open-Billed Stork, Pink-Backed Pelicans, Saddle Bill Stork and Yellow Billed Stork. The wide range of animals and the Kazinga Channel’s birds made a boat cruise along the channel one of Queen Elizabeth National Park’s top activities. It has also helped to become the most visited Queen Elizabeth National Park in Uganda.

One of those fantastic nature opportunities on a safari to Queen Elizabeth National Park is a boat ride along the Kazinga Channel which helps visitors to fully explore all the best things the channel has to bring. Tourists have been planning a slow boat cruise since 1952 to see many large mammals that come to the shores to drink, eat and bathe. The cruise cost $30 and takes place in two sessions between 9 a.m in the morning and lasts for 3 hours while the afternoon starts at 2:00pm and lasts for 3 hours up to 5 p.m. respectively. Each cruise starts from a landing site near Mweya Safari Lodge and lasts for 3 hours. Visitors can choose from two boat choices–one can use the smaller but more luxurious vessel operated by Mweya Safari Lodge or the Uganda Wildlife Authority’s double-decker boat. The vessel belonging to Mweya Safari Lodge is more relaxed and suitable for the boat cruise in the water. The chance to travel through the local fishing communities is one of the interesting things about the slow boat cruise apart from the pets. In the late afternoon, as they get ready to head for the waters at night, the fishermen can be seen packing their fishing gear. Thanks to the unpredictable hippos, there are no fishermen boats in the seas in the early afternoon. The hippos, though, during the night, they go to grazing on land allowing fishermen to catch fish without any fear that they will be attacked by the dangerous hippos. During the dry season, the perfect time to visit the Kazinga River, During this time, the channel becomes an oasis gathering even more parks and domestic animals–all depending on the water to drink, cool off their bodies from the heat of the sun and feed around the water body in the park. It is important to take good pictures of the animals and water for the boat cruise with a good camera. In the late afternoon, would be the best time to take pictures.

Great Adventure Safaris is a registered tour operator company we organize a 3 -Days Queen Elizabeth Tour that combines a boat cruise along the Kazinga Channel with game drives to the other sectors of the park. The boat operates in two sessions that is morning and the afternoon boat, its entirely depends on the interest of the client. Visitors can take both the launch cruise and morning/afternoon game drives along the Kasenyi plains and Ishasha sectors of the park. The plains of Kasenyi deliver incredible opportunities in picturesque natural fields and habitats to find wildlife. Buffaloes and elephants are among the large animals. The eastern part of the Kasenyi plains offers the best place to spot the ordinary African lion as they feed on the Uganda Kobs roaming the region .The Ishasha sector is better known for the lions scaling the tower (tree climbing lions) you will love it when you have an encounter with the king of the jungle.

What to carry for a boat safari on Kazinga channel

Camera, this is essential since it will help you take photos of animals, and the birds and any features of interest during the boat cruise.

A hat, these will help with shelter from the heat of the sun that may affect your activity

Binoculars will help you view the distant birds