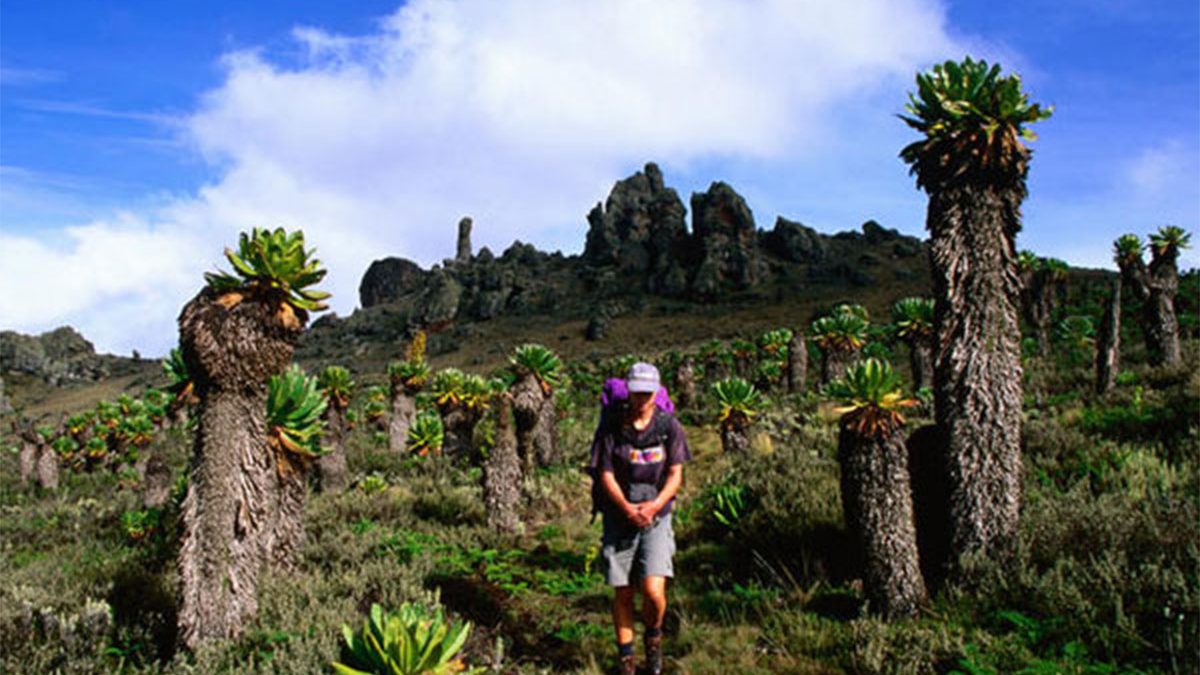 The climate is moist to moderate dry. Annual rainfall is over 1,270 millimeters. The dry seasons run from June to August and from December to March, although it can rain at any time.

Elgon’s slopes support a rich variety of vegetation ranging from montane forest to high open moorland studded with the giant lobelia and groundsel plants. The vegetation varies with altitude. The mountain slopes are covered with olive Olea hochstetteri and Anngueria adolfi-friendericii wet montane forest. At higher altitudes, changes to olive and Podocarpus gracilior forest and then a Podocarpus and bamboo Arundinaria alpine zone. Higher still is a Hagenia abyssinica zone and then moorland with heaths Erica arborea and Philippia trimera, tussock grasses such as Agrostis gracilifolia and festtuca pilgeri herbs such as Alchemilla, Helichrysum, lobelia and giant groundsel senecio barbatipes and Senecio elgonensis.  The botanical diversity of the Mount Elgon national park includes giant podocarpus, juniper and Elgon olive trees cedar Juniperus procera, pillarwood Cassipourea malosana, elder Sambucus adnata, pure stands of Podocarpus gracilior and many orchids.  Of the 400 species recorded for the area the following are of particular note as they only occur in high altitude broad-leaf montane forest: Ardisiandra wettsteinii, Carduus afromontanus, Echinops hoehnelii, Ranunculus keniensis which is previously thought to be endemic to Mount Kenya and Romulea keniensis.

Elephants and Buffalos can be found on the lower slopes. The National Park is also home to a variety of small antelope and duiker, as well forest monkeys, including the Black and white colobus and blue monkey, Red tailed monkey have been reported after being thought to be locally extinct. Both leopard and hyena existed there in the late 1990s.

Mount Elgon is home to at least 144 bird species. Of particular interest are Jackson’s spurfowl, the Eastern bronze-napped pigeon, Hartlaub’s turaco, the Tacazze sunbird and the endangered lammergeyer, due to their restricted range.

Maathai’s longleg, an endangered dragonfly was discovered here in 2005 and named after Nobel Prize winner Wangari Maathai. Half of Uganda’s butterfly species have been reported in Mountain Elgon.

Together with the fauna and flora, the National Park has a variety of scenery; this includes cliffs, caves, waterfalls, gorges, mesas, calderas, hot springs, and the mountain peaks. The most popular areas are the four explicable, vast caves where frequent night visitors such as Elephants and Buffaloes come to lick the natural salt found on the cave walls. Kitum cave with overhanging crystalline walls enters 200 meters into the side of Mount Elgon. At the Endebess bluff there a panoramic view of the areas’ escarpments, gorges, mesas, and rivers. The highest peak of Mt. Elgon on the Kenya side, Koitoboss  measures 13,852 feet, and is easily reached by hikers in about two hours from the road’s end. Activities include

Recent studies have shown that elephants and other mammals are major contributors to the development of these unique natural phenomena. The animals frequently visit at night to ‘mine’ the natural salt by licking it from the cave walls. The caves are mapped and Kitum, Chepnyali, and Mackingeny can be explored by visitors to the park.

Other attractions include ancient cave paintings near the trailhead at Budadiri, and hot srings in the former volcano’s crater which bubble at temperatures of up to 48°C.

The National Park is the setting for parts of Richard Preston’s book. The Hot Zone Kitum Cave is also a setting in the book. Henry Rider Haggard’s well-known novel King Solomon’s may have been inspired by the Mount Elgon Caves.