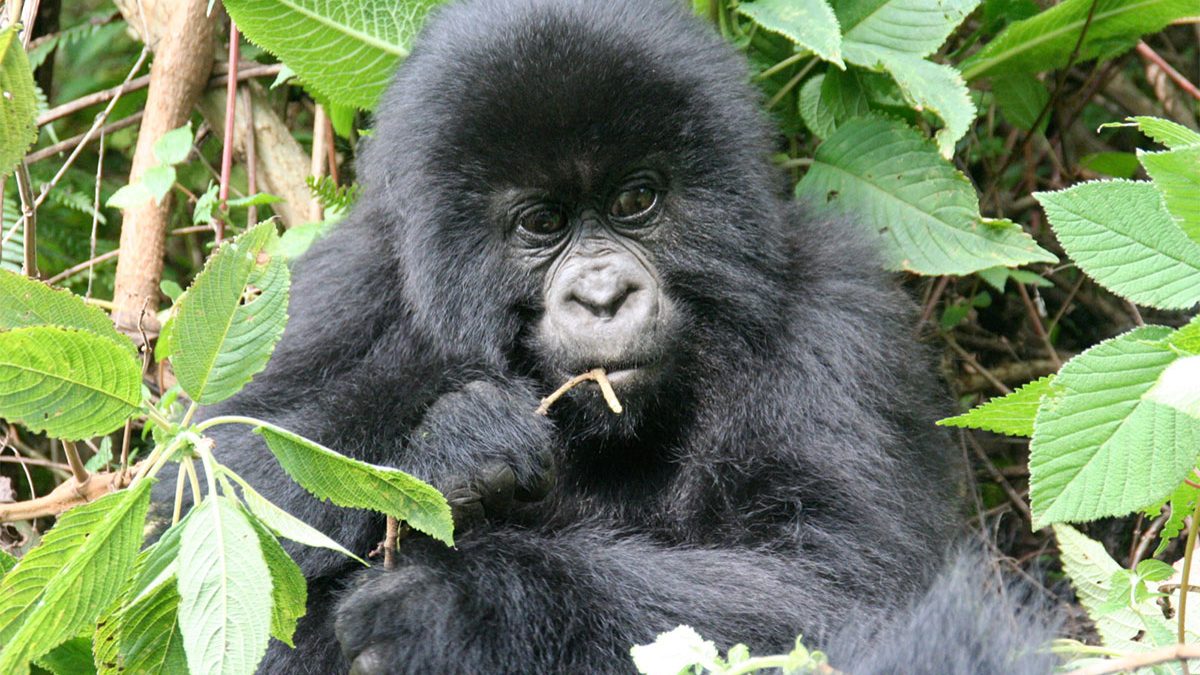 Gorilla tracking tours from Cyanika boarder Rwanda – Cyanika border is located between Uganda’s Mgahinga gorilla national park and Rwanda’s volcanoes National park this makes it easy track gorillas in both Uganda and Rwanda with short drives between the two countries. From the border Mgahinga gorilla national park is 45 minutes’ drive and volcanoes national park is 1 hour drive to the park headquarters in Kinigi. Great adventure safaris can arrange gorilla tracking safaris in both countries without any hustle, and it is a double blessing you can chose which side to take either Rwanda at $1500 per person per trek and Uganda at $700 per person per trek.

Volcanoes National Park (also Known as “Parc National Des Volcans in French and as well as Pariki y’igihugu y’ibirunga in Kinyarwanda”) is found in the Northwestern parts of Rwanda sharing borders with Mgahinga Gorilla National park in Uganda and Virunga National park in the Democratic Republic of Congo. Volcanoes National Park is the origin to five of the ancient eight volcanoes of the Virunga Mountains which include Karisimbi, Bisoke, Muhavura, Gahinga and Sabyinyo, the rainforests and the bamboo vegetation covers an area of 160 km2. The park is home to one of the world’s greatly endangered species that are the Mountain gorillas and golden monkeys.

The park was gazzeted in 1925 as a small area encompassing only Bisoke, Karisimbi and Mikeno with an aim of combating poachers from hunting the Gorillas and hence making it the first national park to be created in Africa.

The gorillas are critically endangered with less than 1000 gorillas left in the whole world and gorilla tracking in Volcano starts at Kinigi the park headquarters (the park has 11 habituated gorilla families) and each gorilla family can be tracked by a group of eight people per day and gorilla permit goes for $1500 USD each.

Another popular activity is the bike riding experience in Rwanda, there are a lot of guided and guided nature walks around the Volcanoes National Park. For example a walk or a ride to Musanze market (Allowing interaction with the locals), a nature walk to yet amazing Twin lakes that are Burera and Ruhondo, a guided walk through the Nyange community brings you to the locals socio-economic lifestyle, a tour to Iby’Iwacu Cultural Villages opens Rwanda’s tradition to foreigners like seeing the Traditional house of a local king, herbal mixtures by an authentic medicine man, Kinyarwanda traditional dance and music and many more interesting experiences.

With an estimate of about 80 rare Mountain Gorillas this Park has only one habituated group and ready for visitors to track. Mgahinga Gorilla National Park lies at an altitude of about 2.227m and 4.127m, south western Uganda. Besides that, the National Park also features three of the eight Virunga Mountain ranges which are Mount Sabyinyo, Mount Gahinga and Mount Muhabura). These Virunga volcanoes stretch up to the Virunga Volcano range of the East Central Africa, Albertine rift in Rwanda, Democratic Republic of Congo and the Uganda border.

Mgahinga Gorilla National Park with its thick vegetation is a reason why the its one of the most rainfall catchment destinations in the country with several crater lakes on the Mount Muhabura and swamp crater on the Mount Gahinga summit as well as amazing swamps that lie within the three volcanoes. The National Park also neighbors the Batwa people (pygmies) the famous forest dwellers who are believed to have stayed in the forests for over 500.000 years and left without any effect.

With its mountain gorillas, the National Park can be accessed by road from Kampala, Kabale, Kisoro highway and you will spend about 8 to 10 hours’ drive. You can also fly from Entebbe International Airport or Kajjansi Airfield and then land into Kisoro Airstrip and connect to your booked lodge / hotel or to the National Park by road, less than an hour drive depending on where you are booked for accommodation.

Mgahinga Gorilla National Park can be also accessed through Kigali Rwanda with a four hour driving instead of 10 hours from Kampala, some visitors fly to Kigali International Airport and cross to Mgahinga National Park through Cyanika boarder and this is approximately 4 hour drive. This route has become very popular since the price of Rwanda Gorilla Permits doubled to USD1500 per person per trek. Mgahinga Gorilla National Park now receives many guests especially for short trips like 2 Days Gorilla Safari through Rwanda-Kigali.

Hiking adventures and guided nature walks at Mgahinga Gorilla National Park offers you a chance to hike through the thick forest to the Sabyinyo gorge that also features as the best site for birding safaris and interestingly, visitors can catch a glimpse at the Rwenzori Turaco. The hikes through this National Park take about 4 hours through the Rugezi the popular spot for birding. The hikes also allow you to explore the transcending vegetation zones along the Congo borders where you will glace several calderas. Other incredible wildlife species for you to spot out include the rare Golden monkeys at the Bamboo jungle.

After your Mountain Gorilla experience, never miss out to pay a visit to one of the cultural communities adjacent at the National Park and interact with the Batwa people (pygmies). This Batwa trail that takes you through cultural exploration with the Batwa people the famous forest dwellers, hunters and gatherers to explore more about their ancient lifestyle and  your presence in the cave is such an incredible moment that you will never wish to leave but rather opt for yet another return to the destination. Contact Great Adventure Safaris to book gorilla tracking tours from Cyanika boarder.