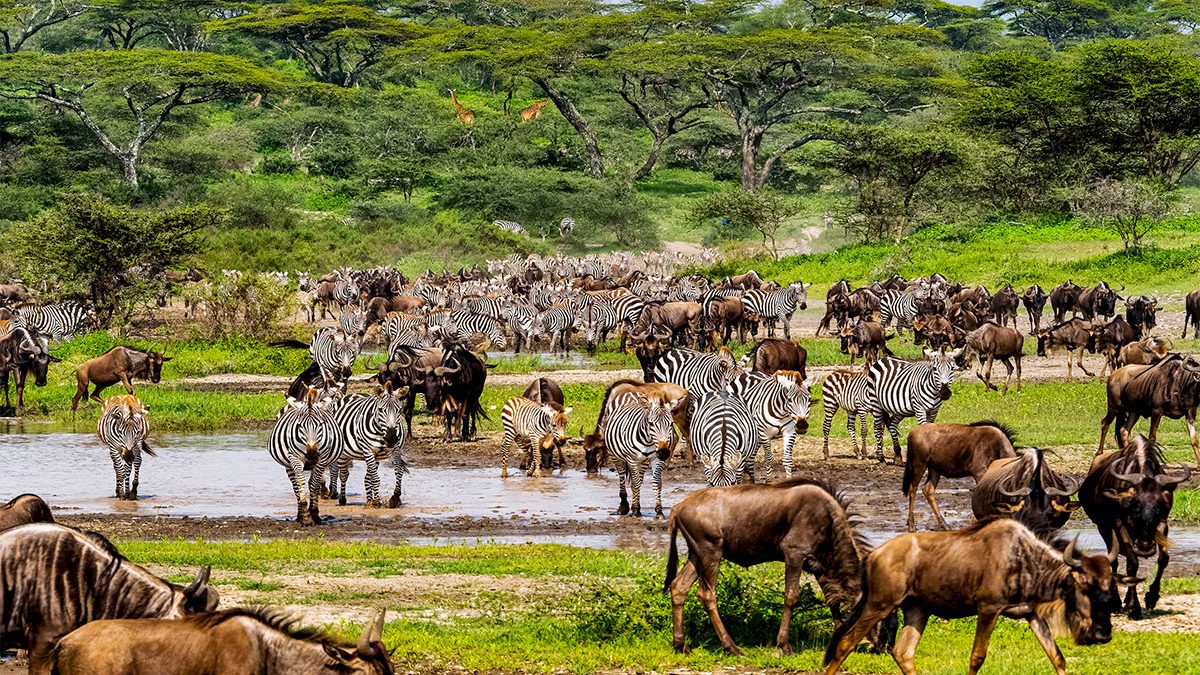 Great wildebeest migration safari guide – The Great Wildebeest Migration is one of the last mass terrestrial wildlife movements left on the planet. It’s the main reason why so many travelers venture to Kenya and Tanzania for a Migration safari, especially around mid-year.

The Migration is one of Nature’s greatest paradoxes: timing is absolutely vital, but there is no way to predict the timing of the animals’ movements. We know that the wildebeest (and a smattering of zebra and antelope) will cross the Mara River but nobody knows exactly when. We also know that rain will trigger the wildebeest to move onto fresh grazing but nobody knows exactly when the rain will fall.

Misconceptions about the Wildebeest Migration:

Not even the wildebeest know when they’re going to cross! Some arrive at the water and swim over immediately; some arrive and spend days hanging around grazing; some arrive and turn back to where they came from. We wish we could predict the crossings, but no-one can. This is why it is best to have as much time on safari as possible if you hope to see a river crossing.

Most people think that the Wildebeest Migration only takes place between July and October, but it’s actually a year-round phenomenon with various but equally exciting events that occur at different times of the year. The river crossings usually coincide with safari’s high season (July to October), hence the perception that this is the only time of the year that the wildebeest are on the move or can be seen.

With climate change, the long and short rainy seasons in Tanzania and Kenya are no longer as regular or predictable as they once were. The rains can be late or early, which will throw the whole wildebeest calendar out of synch. This is, once again, why it’s important to plan for as much time on safari as possible. You cannot fly in for two nights, see a river crossing and fly out again – nature simply doesn’t work that way!

This is a very general breakdown of more or less where the herds are during the year bearing in mind that the entire Migration is triggered by rain, which can be early, late or on time:

The herds are in Tanzania’s Serengeti National Park, moving back down south from the north-east region and into the area of the Southern Serengeti, Lake Ndutu and Ngorongoro Conservation Area (they do not enter the Ngorongoro Crater those are resident wildebeest). The Serengeti is not fenced, so the herds are free to move where they can find grazing. Remember that although up to two million wildebeest, zebra and antelope form the Migration, they are not all in a single herd. The animals break up into mega-herds of thousands or hundreds of individuals at time.

It is calving season until about March – prepare yourself for lots of wobbly babies… and lots of heartbreak as predators swoop in. If you want productive predator action, the Southern Serengeti supplies it with lions, brown hyenas, leopards and even wild dogs taking advantage of vulnerable calves.

The good grazing of the Southern Serengeti, Ndutu and Ngorongoro Conservation Areas means the herds remain in the far south. The action-packed rut is generally in full swing, with males jousting for the right to mate with receptive females.

This means that when the fertile females finally reach the Mara, Talek and Grumeti Rivers many months later, they are heavily pregnant, making their feat even more incredible.

They are generally still in the south but the grasses have all been munched up, the last calves born, and the herds are starting to gather in preparation for the next leg of their journey.

The wildebeest generally begin their northward journey, and many have left already and are in the central and even western Serengeti.

Wagons roll! The massed herds are on the go, huge columns of up to 40 kilometres / 25 miles in length can sometimes be seen as the wildebeest funnel up into the central and western Serengeti. Water sources are starting to dry out as the dry season begins to bite, hence the march towards the Mara River.

Head for the central and western Serengeti – the herds are usually there and getting ready for the toughest part of their odyssey. The weather is cooler and much drier and while there are fewer bugs, there is more dust so prepare your camera equipment accordingly.

The herds have reached the western Serengeti and are peering closely at the brown waters of the rivers they have to cross. Why? Huge Nile crocodiles, that’s why!

As mentioned, it is impossible to predict crossings – they generally occur any time between May and September. Book your Wildebeest Migration safari up to a year in advance to get a lodge on or as close to the river as possible – this cuts down on travel time to lookout points. The wildebeest do have historical crossing areas and you may spend days staked out in the hope of seeing the action.

The survivors celebrate by feasting in the northern Serengeti and begin crossing into Kenya’s Masai Mara National Reserve. You need a passport to cross; the wildebeest are exempt. The national reserve is open to members of the public so for a more exclusive experience, head for the private conservancies that border the reserve.

The herds break up into smaller groups. About half of the animals remain in the northern Serengeti, the rest are swapping war stories in the Masai Mara (‘did you hear that Nigel didn’t make it across the river?’). The Serengeti-Mara ecosystem is just that: one system that has been artificially divided by humans. The herds will be spread out, making the most of water and food.

Your best bet is the Masai Mara, but bear in mind it is a far smaller reserve than the Serengeti and there may be a lot of other visitors. The conservancies around the Mara are much less crowded and, not only will you still be able to witness the Migration, you will also directly contribute to the Masai communities who have lived there for thousands of years.

In a ‘normal year’ the short rains have begun, propelling the wildebeest to leave the now denuded grasslands of the Masai Mara and back into the rejuvenated Serengeti. Bear in mind that the rain can be late or early, which is also unpredictable.

Tip: although many people think of Africa as a hot place, the rain can cool things down dramatically. You’ll be out on early morning and late afternoon game drives – the sun is at its weakest during these times. Take at least one pair of trousers, closed shoes that can cope with mud, and a fleece or waterproof jacket.

Fresh grazing sees the wildebeest clustered in the north-eastern Serengeti (around Lobo in particular), as well as the southern Serengeti. Calving begins again, the predators move in again, and the cycle of life begins all over again.

Note: the above are approximate dates only. The Wildebeest Migration is a year-round, circular journey and the river crossings cannot be predicted. Sometimes the herds stay put for two weeks, other times they could cross four times in one day.

The bulk of the Migration takes place in the Serengeti.

It is a year-round, circular journey.

River crossings cannot be predicted, but generally occur between May and September.

The animals are strung out across a large area there are always fore-runners and stragglers.

Your best chance of seeing river crossing may involve spending all day at a site where the wildebeest have massed. If you are a keen photographer, your best opportunities may occur around midday when the sun and glare are at their harshest, so make preparations to accommodate this. Contact Great Adventure Safaris for details information about great wildebeest migration safari guide and booking a safari to see the wildebeest migration. 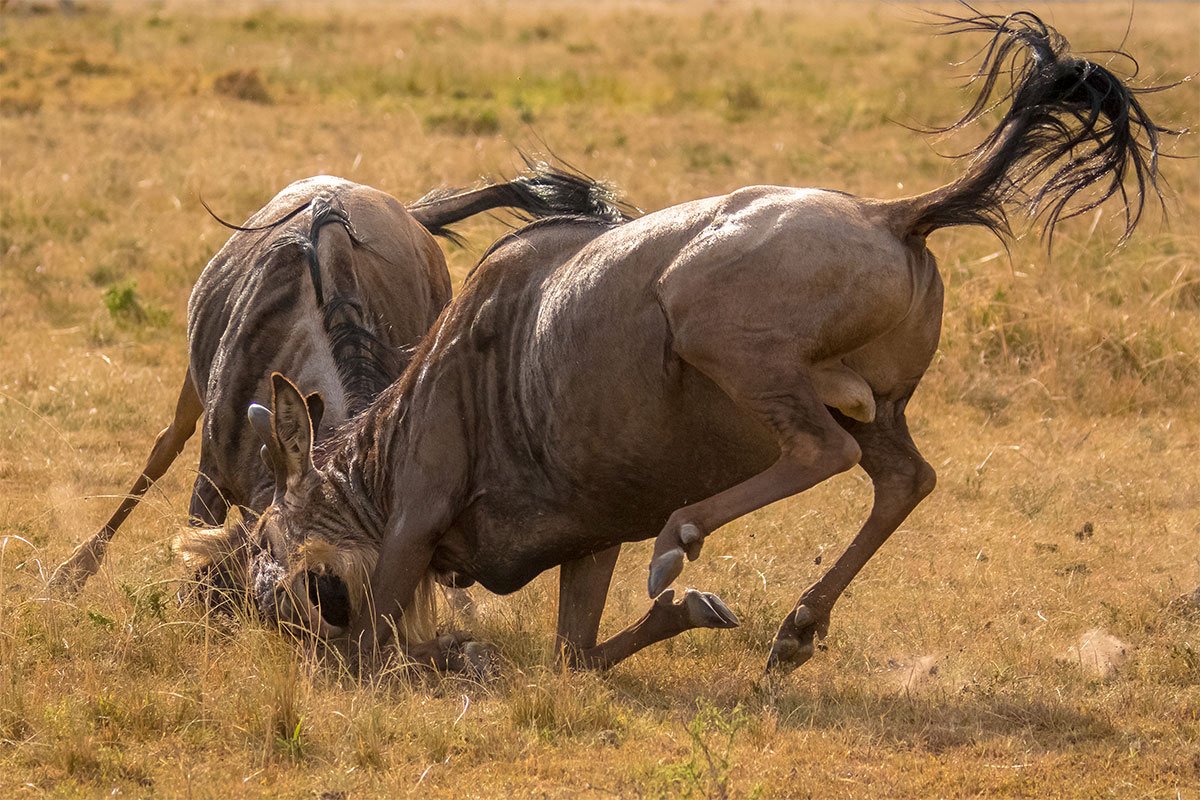 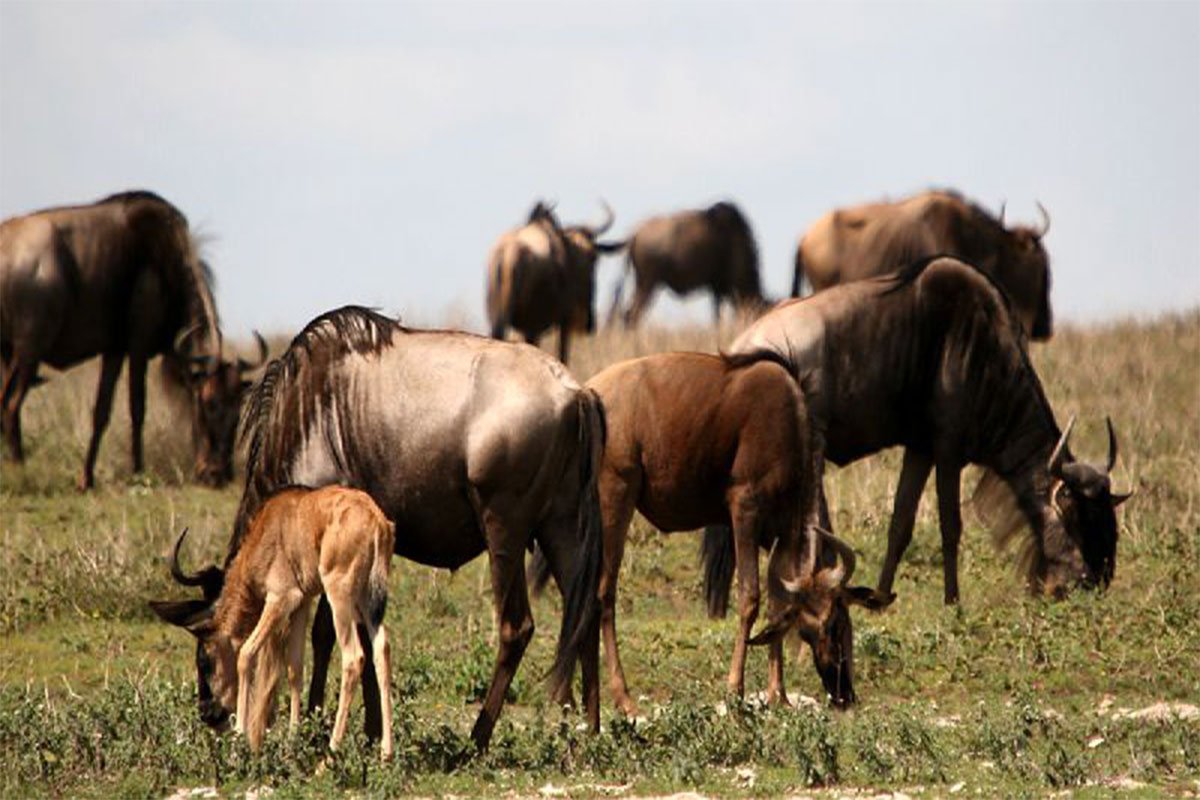 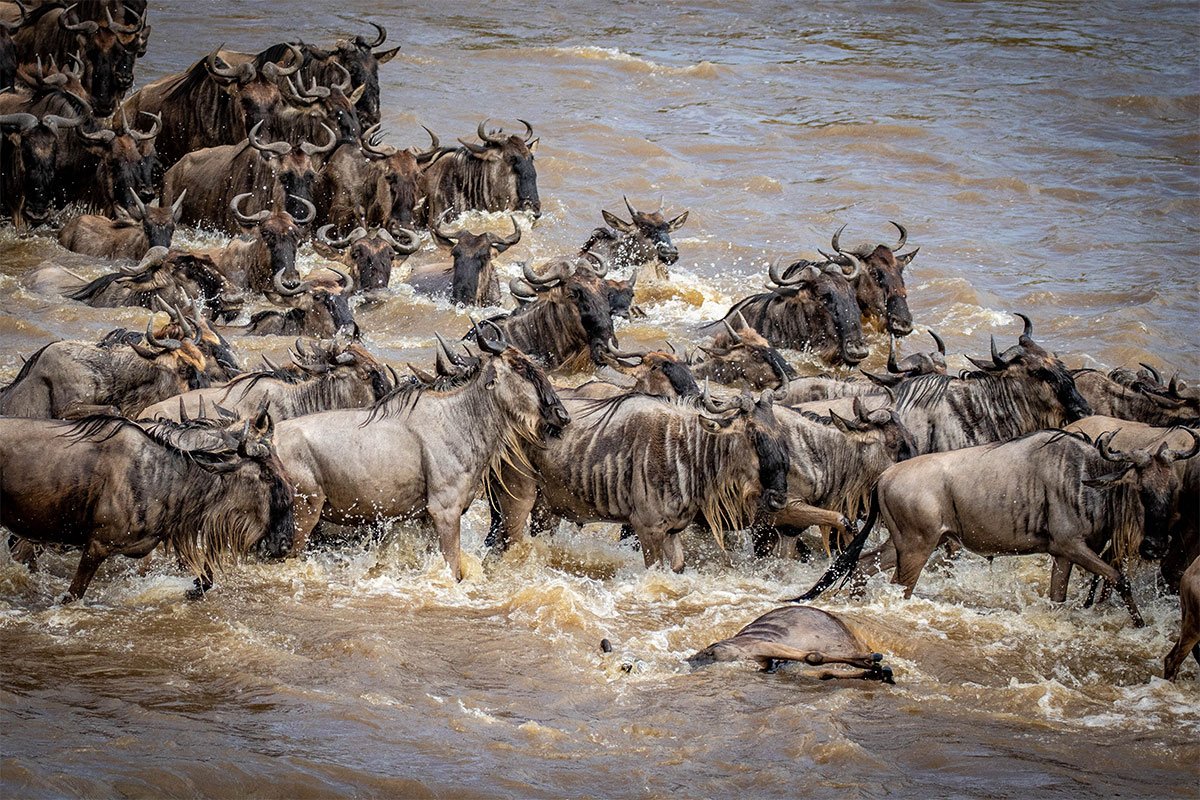