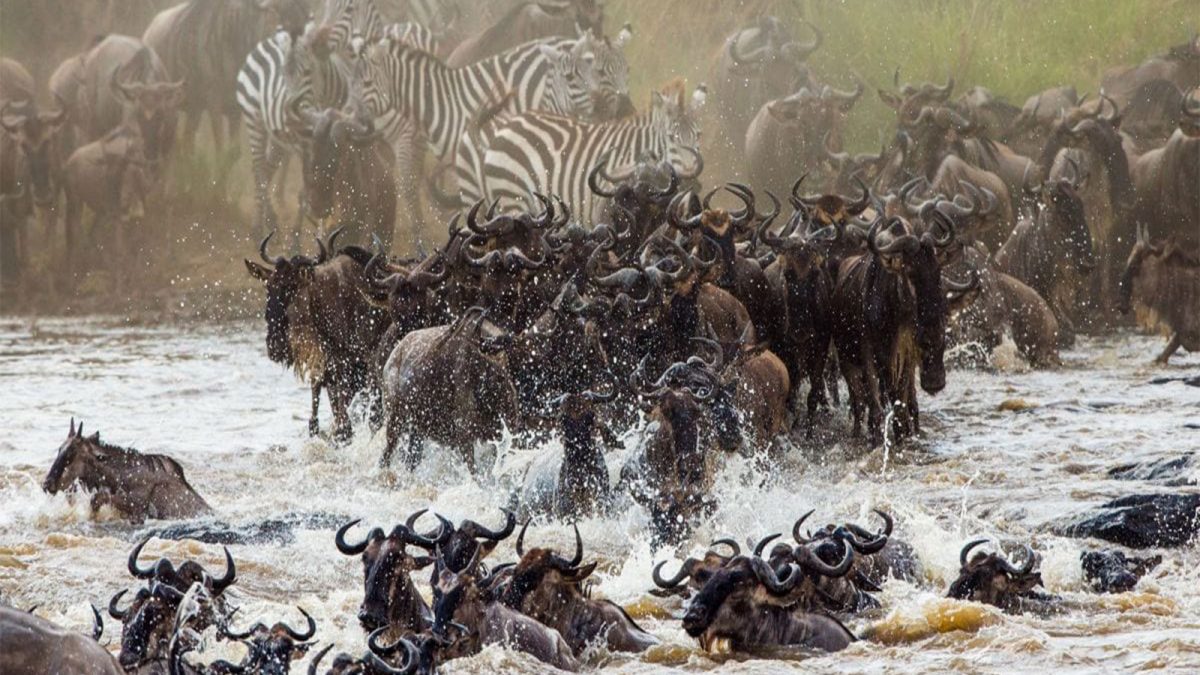 Guide to 2021/2022 wildbeest migration safari – Great Adventure Safaris arranges Kenya and Tanzania safaris to watch the wildbeest migration and Each year, almost two million wildebeest and 20 000 plains game migrate from Tanzania’s Serengeti to the south of Kenya’s Masai Mara in search of lush grazing grounds and life-giving water. This treacherous odyssey is dictated by the seasons and where the rains are, the wildebeest are not far behind. This epic journey from north to south spans almost 3000 kilometres and is virtually endless. This great spectacle of nature is an iconic safari option for avid travelers, nature lovers and those who want a little more from their African experience. Rather than having a start or end point, the Great Migration moves rhythmically in a clockwise direction, making herd tracking unpredictable. It is for this reason that our Herdtracker app was created; to help you track the wildebeests’ movements and plan the safari of a lifetime. Choose from Great Adventure Safaris existing safari packages or tailor-make your own journey according to your budget.

guide to 2021/2022 wildbeest migration – Below, you’ll find some useful resources that detail when to go, where to stay and what to expect along this unforgettable journey. Our experienced safari experts as well as affiliate camps and guides on the ground all work together to provide you with up-to-date information on where the herds are, as well as the predators that stalk them.

guide to 2021/2022 wildbeest migration – Expect wet weather in December, as the short rains begin to fall in the Central Serengeti. The wildebeest herds will move quicker now, as far south as possible, towards the Southern Plains which they usually reach within a couple of days.

That the Migration only takes place between July and October The Great Migration is a year-round phenomenon, with different but equally exciting elements occurring at various times of the year. The river crossings usually coincide with peak safari season, hence the perception that this is the only time of the year that the wildebeest are on the move or can be seen. With climate change, the long and short rainy seasons over Tanzania and Kenya are no longer as regular or predictable as they once were. The rains can be ‘late’ or ‘early’, which will throw the whole wildebeest calendar out of synch. This is, once again, why it’s important to plan for as much time on safari as possible. You cannot fly in for two nights, see a river crossing and fly out again – nature simply doesn’t work that way! This is a very general breakdown of more or less where the herds are during the year, bearing in mind that the entire Migration is triggered by rain, which can be early, late or ‘on time’.Contact Great Adventure Safaris for detailed information about the guide to 2021/2022 wildbeest migration safari.