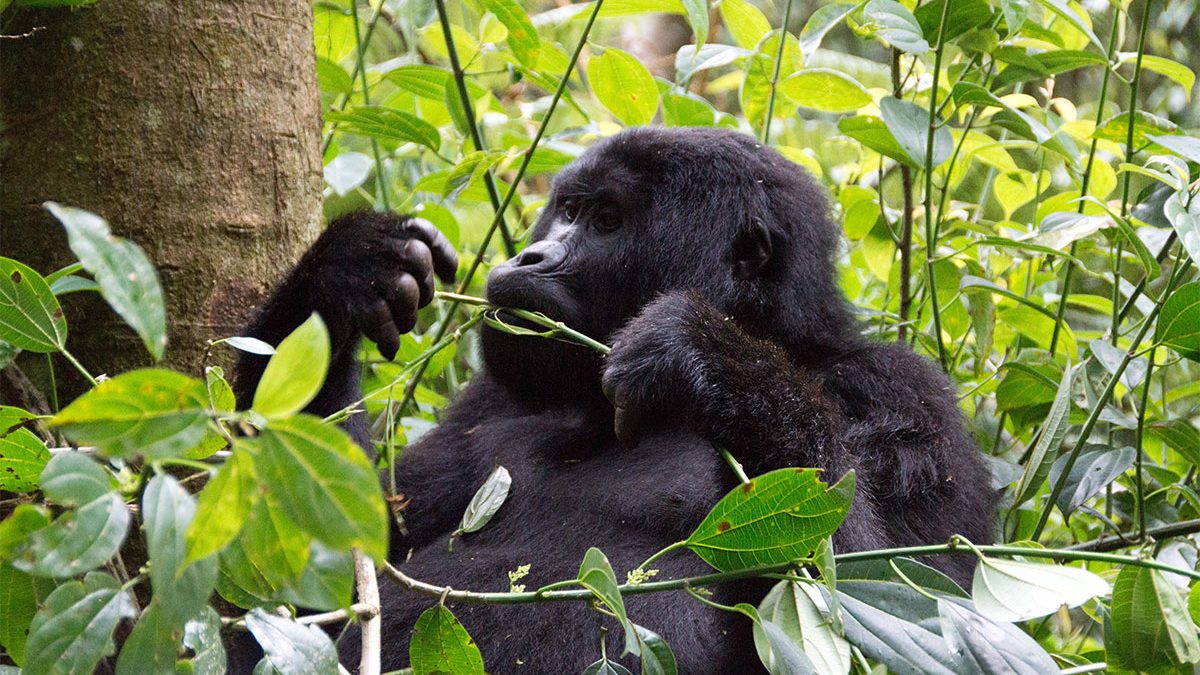 Habituated gorilla family groups in Nkuringo sector – If you choose to do a gorilla trek tour in Uganda’s Bwindi, you will be allocated to track gorillas in either of the park’s 4 sectors. One of these is Nkuringo in the south of Bwindi which has 3 gorilla families or gorilla groups.

Tracking gorillas in Nkuringo sector offers some of the most challenging gorilla treks within Bwindi Impenetrable Forest. If you are a photographer, Nkuringo is a location that you do not want to miss in all of Uganda because it simply is an incredible location, and the views seem to change all day long from the early morning mist to the sunset in the evening. Nkuringo is truly magical and mere words cannot describe its beauty and wonders. You have to visit this incredible spot in Bwindi Impenetrable Forest and you too will see it as one of the most stunning locations in all of Africa. An experience in sight, color and the surrounding sounds that weave together a tapestry of memories of this magical place called Nkuringo

Composed of 12 individuals; 2 silverbacks (1 was brutally murdered by poachers in June 2020), 1 black buck, 2 adult females, 2 sub-adults, 3 juveniles and two infants. Nkuringo family is found in Nkuringo tourism sector of Bwindi Impenetrable national park.  Nkuringo family was the first gorilla group to be habituated in the entire southern sector of BINP in 1997. Initially, the group had 17 but with time a number of members kept dispersing up to the current size of 12 members. Nkuringo family is also the first gorilla group to record the birth of gorilla ‘twins’ in BINP in December 2004. The group is famously known for foraging outside the park for up to 98% of their time. This practice led to the displacement of the former local human settlers in the frontline villages in Nkuringo sector to create a buffer zone to minimize human-wildlife interface. This displacement followed an outbreak of Scabies in the Nkuringo family in December 2000. Nkuringo family has always been headed by Rafiki.

The habituation of Bikingi gorilla group commenced in early 2012 as a follow-up exercise of the dispersing members of the disintegrated Mishaya family. Indeed, several members of the former Mishaya family were located in the group alongside other non-habituated members and later-on declared for habituation to keep close monitoring of the formerly habituated members. Bikingi family is found in Rushaga tourism sector of Bwindi Impenetrable national park. Unfortunately, this family’s leadership is not yet confirmed because it’s still undergoing habituation. Bikingi family is composed of 15 individuals including; 1 silverback, 5 adult females, 2 sub-adults, 2 juveniles and 5 infants.

Following a number of individual gorilla dispersals from Nkuringo family, a search for their whereabouts was launched in early 2012. It was discovered that one of the former Silverbacks of Nkuringo family, SB ‘Bahati’ who had dispersed earlier was leading a parallel family. Some of the members in this family were former members of the Nkuringo family among other non-habituated members.  What started as a follow-up exercise later led to close monitoring of the behavior of the parallel family. The group was later habituated and named ‘Bushaho’ after the topography name of the locality where the group forages most. Bushaho family is still headed by Bahati and is found in Nkuringo tourism sector of Bwindi Impenetrable national park. Bushaho family is composed of 8 individuals; 1 silverback, 1 blackbuck, 3 adult females, 1 sub-adult, 1 juvenile, and 1 infant.

The sunrises and sunsets at Nkuringo are something you need to experience beyond mere pictures but for yourself there are nature walks such as the Top of the World, where you look almost endlessly into the Congo, explore the local village of Nkuringo and learn the culture and ways of the people, all within this incredible setting called Nkuringo. Contact Great Adventure Safaris for details about habituated gorilla family groups in Nkuringo sector and securing gorilla permits for your gorilla trek in Bwindi impenetrable National park