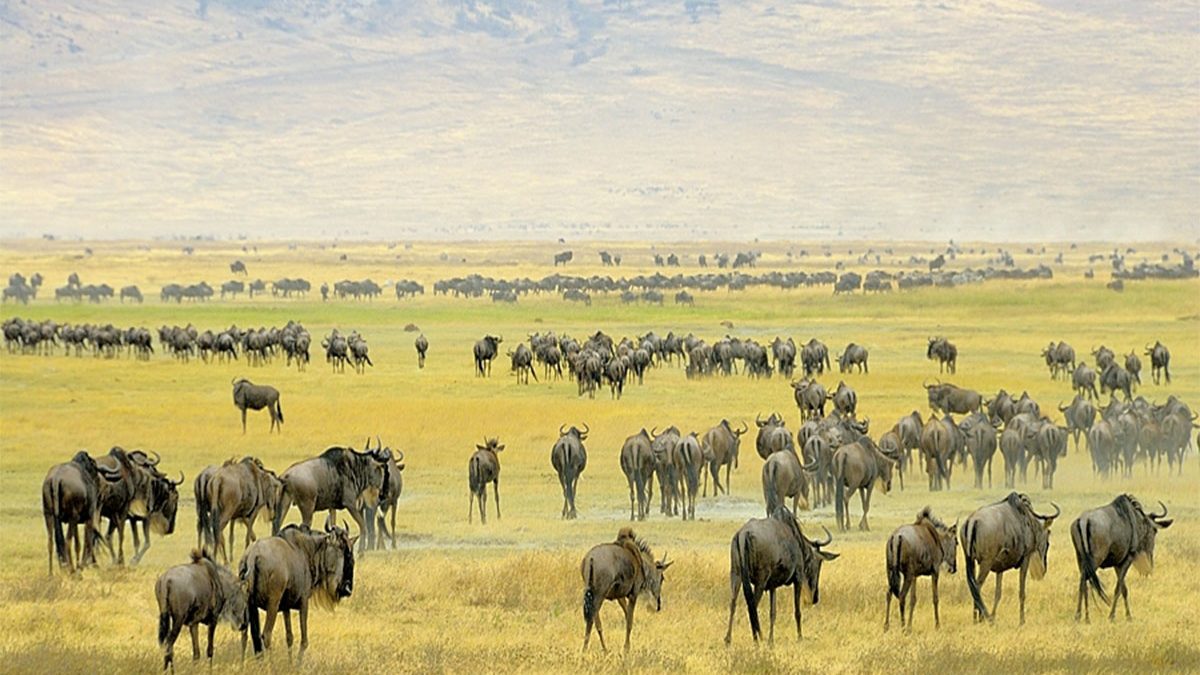 It’s important to note that the wildebeest migration starts in early June to late October due to the demand of services around Serengeti and Masai Mara travellers are advised to book this safari in advance in order to get premiere sector accommodations where they will have the best view of the wildebeest migration in Kenya or Tanzania, for more information contact Great Adventure safaris team of expert consultants in organizing life time safaris to Kenya and Tanzania.

Wildebeests are as well as known as the gnu, a large antelope measuring between 45 and 55 inches at the shoulder and weighing between 300 and 600 pounds. Wildebeests measure between 5 and 8 feet in length and have a tail length of 14 to 22 inches. This animal was named by the Dutch people who settled in South Africa “wildebeest,” meaning “wild beast,” due to its untamed appearance and vigorous nature.

Wildebeests have a long, rectangular-shaped head, both males and females possess lengthy horns that spring outward from the base of their head and form curved semicircles, pointing slightly backward. In adult males, the horns are heavily embossed. The different subspecies of the wildebeest vary in colour, ranging from slate grey to dark brown, with males darker than females.

All wildebeests have short hair covering their bodies, with black vertical stripes of longer hair on their back. The body of a wildebeest appears disproportionate, with a hefty front, slim hindquarters, and spindly legs.

Wildebeest thrive in areas that are neither too wet nor too dry, with their range extending from the Equator to the tip of South Africa. The blue wildebeest, known as the brindled gnu, ranges from Kenya to northern South Africa. They prefer the dense bush lands, open grasslands and woodland floodplains of the southern savannah.

Wildebeest are social and territorial animals. Females and their young, form small herds and their territories are frequently overlapping. After about a year, males will leave their herd and enter into a bachelor’s herd. At 4 or 5 years old, males will become highly territorial and depart from the bachelor’s herd. Neighbouring bulls will challenge one another when encountering each other at the edges of their territories. They follow a series of ritualized actions, bucking, snorting, pawing at the ground, fighting, and grunting in a deep croaking manner like a frog. The wildebeests will face one another on their knees, foreheads to the ground, ready for combat fighting. The bulls move forward to strike each other, knocking heads and horns, but rarely will become injured. Wildebeest are constantly moving throughout day and night, in search of water and preferred grasses for feeding. They tend to migrate in lengthy, single-file columns, traversing long distances at an easy rocking gallop, though they are swift when provoked. Animals such as Thomson’s gazelle, Zebras, and even predators will follow the traveling wildebeest. The number of times a herd moves and the number of females in a herd depends on a number of environmental factors, such as quantity of rainfall or quality of dry season pasture.

Every year, wildebeest in the Serengeti National Park and Masai Mara National Reserve, travel in a migratory circle of between 500 to 1,000 miles. After calves are born in January and February, the migration begins in the South Eastern Serengeti. Traversing across the short-grass plains, wildebeest approach Lake Victoria in the west. They head toward open woodland, and then curve north en route for the Masai Mara. Lastly, they take a turn to the south toward home. They are single-minded in their pursuit, swimming across bodies of water in such massive numbers that many die, become injured, or are lost.

Wildebeest are highly desirable prey for spotted hyenas and Lions. Although wildebeest are unable to adequately camouflage themselves, they are afforded some protection by gathering in large herds. Crocodiles are also a danger to the wildebeests as they cross water bodies on their migration.

The beginning of the mating season, called the rut, is connected to the full moon. Territorial males however, are constantly prepared to mate and throughout the mating season, breeding clusters of around 150 wildebeest form from within the bigger herds. In these groupings, five or six of the most dominant bulls create and guard territories that cows amble through. Bulls make a show of bucking and cantering around their lands. Bulls also mark their territories by urinating, defecating and spreading secretions in particular areas. The secretions come from the inter digital and pre orbital glands, spread when bulls paw at the ground and proceed to rub it with their heads.

When a bull comes into contact with another wildebeest, they acknowledge one another by moving at a rocking canter. If they are greeting a cow, the bull will attempt to mount or herd her. If the cow is calm, the bull will repeatedly mate with her about two times per minute. If her herd is mobile, a cow may come across several dozen bulls a day. If she is in full heat, a bull will always be close to her side.

During the mating season, wildebeest are quite a bit more riled herding, fighting, and calling to each other frequently. An aroused bull will try to herd as many cows as possible, and will not sleep or eat for excitement if a female is nearby. Females typically reach sexual maturity at 16 months, though they frequently do not mate until around 28 months old. They are extremely fertile, conceiving at a high rate in part because the peak of their breeding season is at the end of the rainy season, anticipating a fair climate for carrying offspring. Gestation period is 8 to 8.5 months and wildebeest are unique from other African animals in that they calve within the same short span of time, during the month before or start of peak rainy season.

Female wildebeest give birth to one calf in the centre of the herd, rather than finding an isolated place, as many antelope species do. Around 80 per cent of females in a herd give birth within the same two to three weeks. The overabundance of calves allows for more of them to survive predation in the first vulnerable weeks of their lives. Once a calf is delivered, the mother begins to lick it. After six minutes, the calf is able to stand on its feet and attempts to be nursed. It is very important that the mother stays close to her new-born for the first two days in order to assure that the calf imprints on its mother, which begins with the first suckling.

New-borns are a yellowish-brown, but change to adult colour at about 2 months. A calf suckles from its mother for at least four months, though it begins eating grass after about 10 days. A calf will stay with its mother, even after it is weaned, until the next years new-born arrives. Young females usually remain in the same herds as their mothers, while males are sent away. At 8 months, the young leave their mothers and form peer groups.

Now that you know how the Great Migration works, you can easily see that the best time to go depends entirely on which events you’re personally interested in seeing. Remember, the Serengeti and Masai Mara’s abundance of wildlife and wide open landscapes make them fantastic year-round safari destinations.