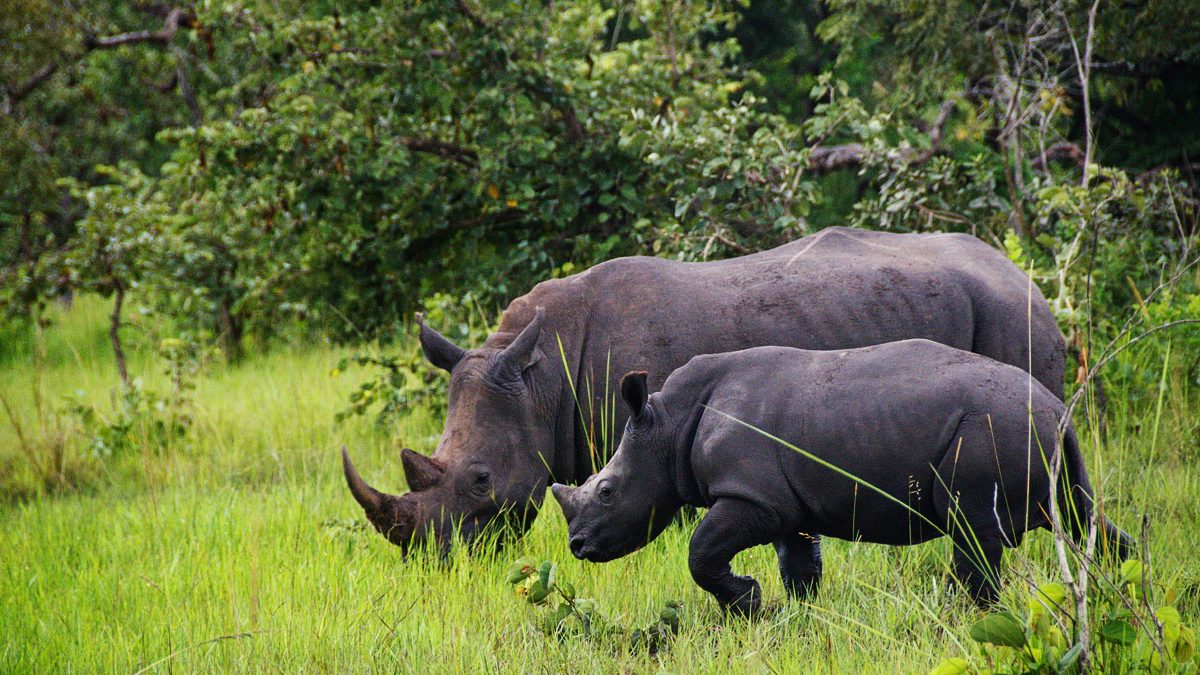 Rhino Fund Uganda is amazed to announce another birth at 6:00AM by Nandi (20). She perfectly gave birth to her sixth calf at Zziwa Rhino Sanctuary in Nakasongola.

The good news is that both the mother and her baby are perfectly in good health. This makes the total number of rhinos in Ziwa sanctuary to 26 according to the Executive Director Angela Genada. The number of male rhinos now is 15 and 11 females.

About the mother and her born baby.

Nandi was among the first 6 rhinos to be introduced to Uganda. Her origin is Disney Animal Kingdom Florida (USA).  When giving birth, they noticed she was restless and always isolated herself from the herd; she was seen mowing and corrugating her fore head. Nandi later acted visibly containing the pain as the shy sun peeped out of the sky. After 45 minutes the new baby come out staggering onto its feet and started searching for its mother’s treats before her eyes could open.

In Uganda, rhinos where once noticed roaming in plains. However during the past Uhuru political turmoil in 1986, the last one was killed.  But in the early days of Gen:  Idi Amin Dada’s rule in Uganda he gave same to the USSR (Russia). Surprisingly the two at the Uganda Wildlife Education Centre have not been able to procreate. There is a belief that they need competition according to UWEC public relations officer.  Animal keepers also have a belief that they hear the roar of the lions in the center. This does not augur well with the safety of their babies. Therefore they do not take chances given to such predators e.g. lions in their midst.

Great Adventures Uganda offers trips to the Ziwa Rhino Sanctuary for tourists interested in tracking Rhinos in the wild and we also combine it with our 3 Days Murchison Falls to visit the Top of the Falls, Game Drives and a boat cruise to the bottom of the falls.

Actual experience of Rhino trekking in the Sanctuary

Upon arrival at the sanctuary you will register in the visitors book and meet the ranger for briefing and later drive to the starting point for Rhino trekking, after you will walk on foot to see the Rhinos and this takes about 2 hours

Other activities to do in Zziwa rhino sanctuary

Our guided night walk will introduce to you night sounds and sensations you did not know existed! You cannot exclude this experience from your activities on the sanctuary. We have many nocturnal animals and who knows what you might bump into

Search for the rear shoebill

How to get to Zziwa Rhino Sanctuary

Zziwa Rhino Sanctuary is approximately 180 Entebbe via the main capital Kampala and on smooth roads, the drive can take about 3 hours without traffic and those with private helicopter can fly in to the sanctuary after obtaining security clearance from the Sanctuary

Great Adventures Uganda offers trips to the Ziwa Rhino Sanctuary for tourists interested in tracking Rhinos in the wild and we also combine it with our 3 Days Murchison falls to visit the Top of the fall, Game Drives and a boat cruise to the bottom of the falls.