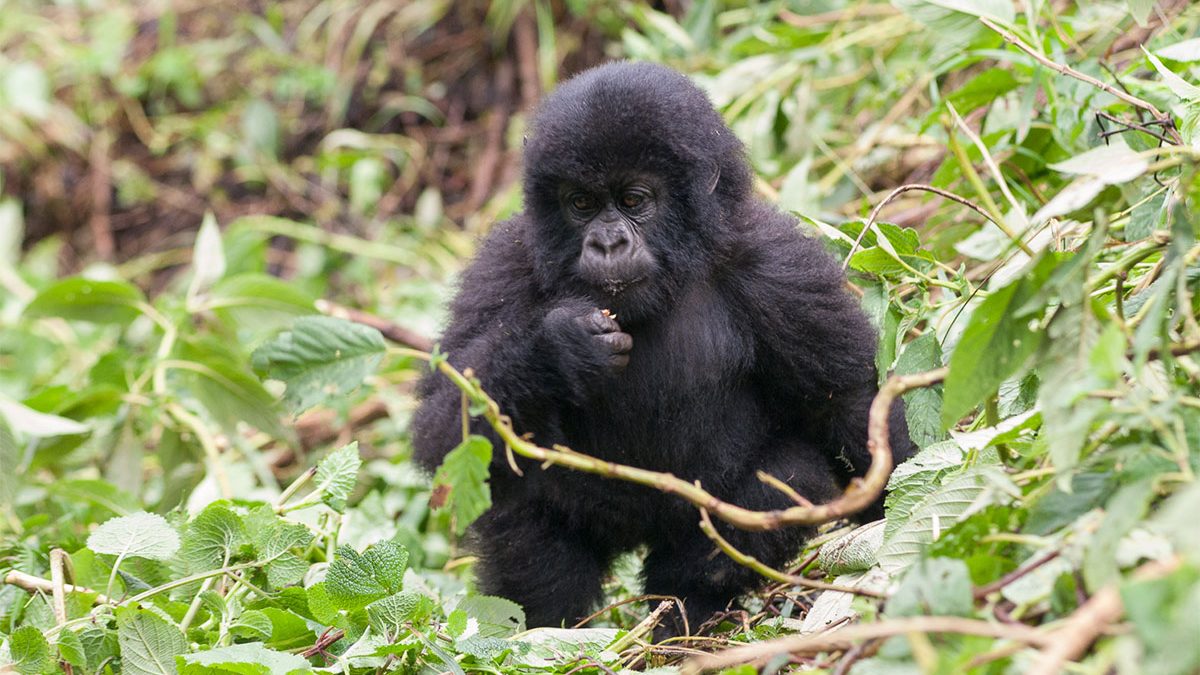 There are very few mountain gorillas left in the wild with limited home range only living in the Virunga massif and Bwindi impenetrable national park.

Some of the key problems facing the mountain gorilla population are:

Before the park boundaries were marked the forest lost a lot of land to the farming near the slopes of volcanoes national park.

Up to date poaching for bush meat is still being experienced in the park usually the poachers are targeting antelopes and bush pigs but sometimes the gorillas fall victim of the traps.

This has really being a problem for Democratic republic of Congo where apes are trafficked as pets in homes and the zoos.

Political instabilities in the eastern democratic republic of Congo have greatly affected the gorilla conservation efforts as rangers have been attacked and killed.

The increase in human population is becoming a huge problem to the conservation as the human demands have gone up forcing the locals illegally enter national parks without permission to get resources like honey, wild fruits.

Increase in human and animal conflicts as animals move out of the park like the gorillas and elephants which destroy their food crops and there is no compensation for the losses involved and this has caused stain the conservation relations in the national parks.

Mountain gorillas being territorial they always have fights among themselves leading to death of individuals.

The baby mountain gorillas are vulnerable during the acrobatic age where they swing on branches and sometimes they fall and die on spot.

Wild fires have also burned some parts of the forest which has affected the home range of the mountain gorilla.

Cases like scabies have been recorded in Uganda’s Bwindi impenetrable national park which has caused a big threat to the mountain gorilla health.

During dry season mountain gorillas struggle to get food hence moving a lot and this affects their breeding circle.

Some areas in Africa due to security have seen low number of tourist like Virunga national park which has made funding of the national park activities very hard.

Why trek mountain gorillas in Rwanda.

Rwanda’s volcanoes national park has one of the most easy gorilla treks in Africa as the habitat of the mountain gorillas in only as far as the bamboo zone.

Rwanda’s history of genocide has made it a popular destination to visit as the country has developed in a very short period visiting will help you understand the country more and meeting the beautiful people..

The government of Rwanda has continuously encouraged investors to the country this has seen the introduction of chains of hotels like bisate, singita kwitonda and one and only lodges.

Volcanoes national park is located 3 hours from the main capital making it one of the popular safari destinations in east Africa.

Rwanda has continue expand its national carrier Rwanda air which has made the access easier for travellers.

Rwanda is one of the countries in east Africa with low crime rate making it preferred destination to visit.

Rwanda development board has been investing in marketing the product through sports sponsorships and TV shows this has made it known to the outside world.

The government of Rwanda has been actively managing poaching activities in volcanoes national park this has seen the gorilla population increase.

The topography of volcanoes national park has made it accessible to older travellers and the unfit.

Rwandan people are now friendly after the genocide they united and now they are friendly people to visit.

Besides mountain gorillas you can see chimpanzees, golden monkeys or go on safari to Akagera national park may be if your beach holiday maker then Lake Kivu is your premier spot to do that.

Rwanda is open for tourism all year round but the best months are June-September and from December –February. Great Adventure safaris gives you reasons why trek mountain gorillas in Rwanda and we can secure gorilla permits for all travelers that confirm their gorilla trekking safaris with us.