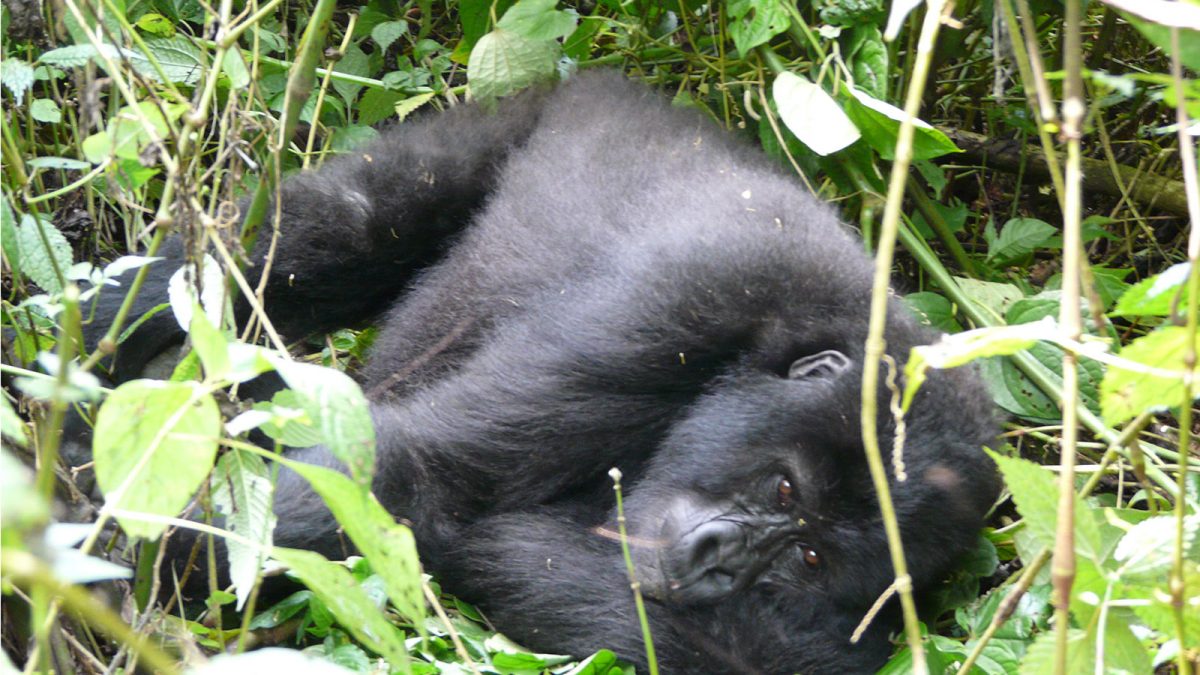 Rwanda gorilla walking tours and safaris – Great Adventure Safaris specialize in Rwanda walking tours in Africa. Mountain Gorillas are the largest primate in the world, and also one of the most endangered animal species. Poaching and habitat destruction has led to a situation in which there are only 1040 mountain Gorillas remaining in the wild, with the majority of these residing in the Virunga ranges and others in Rwanda and Uganda.

Unlike the smaller primates that spend a great deal of their lives in trees, mountain Gorillas are ground-dwellers who prefer to live in open canopy forests where light reaches the forest floor. They are herbivores whose diet consists of roots, leaves, vines, stems, and bamboo.

Despite being capable of bipedal movement, Gorillas are predominantly knuckle walkers who move about on all fours. Females choose their breeding partners based on their ability to protect them, and groups of Gorillas range in size from anywhere between a mated pair to up to thirty individuals. On average, ‘families’ of gorillas are comprised of nine Gorillas.

Male Mountain Gorillas stand approximately six feet tall and can weigh up to 200 kilograms, while females are smaller at less than five feet in height and weighing around 100kgs. Despite their size, mountain Gorillas does not range widely, and tend to keep to a relatively small area of their habitat.

How to get to Volcanoes National Park?

Volcanoes National Park is found in a small village called Musanze previously well-known as Ruhengeri, which is very accessible by public transport from Gisenyi, Kigali City or from the Kigali International Airport. The drive to Volcanoes National Park is 2-3 hours and hence one can do Gorilla tracking on the same day and drive back to Kigali after the trek. You will be required to arrive at the National Park headquarters in Kinigi, by 7:00 am, therefore, if you hope to trek Gorillas for one day, you have to wake up very early for your journey so that you are on time. However, there isn’t any public transport from Musanze to the headquarters of the National Park at Kinigi.

Visiting Rwanda for Gorilla tracking can be done all year round. The best time to travel to Rwanda is during the drier seasons, periods between December to early March and June to September. December to March is a long dry season for Rwanda, with temperatures going up to 29 degrees Celsius for some days while the months of March-Mid May, July to September, on the other hand, are regarded as the rainy in the country.

Overall Rwanda has a good whether throughout the year but the dry season is more preferable. The weather is generally good in addition wildlife viewing is also more common during this period of time. Tourists interested in visiting mountain Gorillas, this is the best time for Gorilla tours since there is a minimal chance of rain during the trek and a good hiking terrain in the rainforest. We still suggest your waterproof clothing even during these drier months, as this Equatorial climate is very unpredictable. This period is also a peak season, hence the prices can be higher on things like accommodation, car hire etc.

On the other hand, some travelers especially those on budget like visiting in the wet season. During this season, hotels have low occupancy, hence give travelers discounted food and sleeping services which is an added advantage. Also, there is low demand for Gorilla permits which guarantee visitors a chance to see these endangered species with no competition.

DAY One: Arrival in Kigali International Airport and transfer to Volcanoes National Park
On arrival at Kigali International Airport, you will meet by our driver/guide and your day starts with a complementary tour of Kigali City.  Named in 1907 by Dr. Richard Kandt, the first colonial resident governor of Rwanda; Kigali city is surrounded by lush hills of green and is referred to as the land of a thousand hills. Get to visit interesting spots which may include; the craft market, Gisozi Genocide Memorial site and Kigali museum. Depart for Ruhengeri area the second largest town in Rwanda, with its stunning backdrop of five volcanic mountains the Virungas arriving at your hotel late afternoon for dinner and overnight.

Day Two: Gorilla Trekking in Volcanoes National Park
After an early breakfast, you will proceed to the National Park headquarters to meet your ranger guides for the day. After completing our park formalities, we are embark on a once in a life time experience of tracking mountain Gorillas. Once you spot them you are allowed to spend one hour watching with them. This is perhaps one of the most breath taking wildlife experiences on earth!!! You get so close to these awesome giant primates. You stare at each other blankly not knowing who to break the long silence first. Tracking the mountain Gorillas through the light mountain forest on the slopes of the Virunga is a magical experience. These massive primates are extremely rare, with less than 900 living today. You will get within seven meters of distance with them. The trekking may be fairly strenuous; up to six hours or longer at a relatively high altitude. We encourage for your own enjoyment to make sure that you are perfectly fit and healthy. Return to your hotel for lunch and later dinner and overnight. If you still have time on this day you will visit Iby I’wacu cultural village and enjoy the entertainment of the former poachers and take you through many cultural ways of Rwanda.

This day starts with an early breakfast and then transfer to the National Park offices for registration and a general briefing about Dian Fossey grave hike. The hike to the Dian Fossey Tomb is one of the most sought after hiking activities carried out while visiting the Volcanoes National Park for a Gorilla safari. The trek involves a 30 minutes’ drive from the park headquarters to the trail head to access the Karisoke research camp where visitors walk for 10 minutes to the National park boundary. The walk from the park boundary to the research center where the Dian Fossey’s grave is, takes about an hour to 1 hour and a half and affords good views of forest hogs, forest elephants, a variety of primates and many bird species. On several occasions, hiking to Dian Fossey grave yard is one as a complement to other tourism activities in Rwanda which include Gorilla tracking, golden monkey tracking, volcano hiking, caving and a visit to Bulere and Buhondo twin lakes.

Day Four: Drive back to Kigali International Airport for your flight out
After breakfast you will bid your host good bye and depart for Kigali. Engage in last minute shopping in one of the friendliest African capitals, before returning to the Airport for your onward international flight back home.