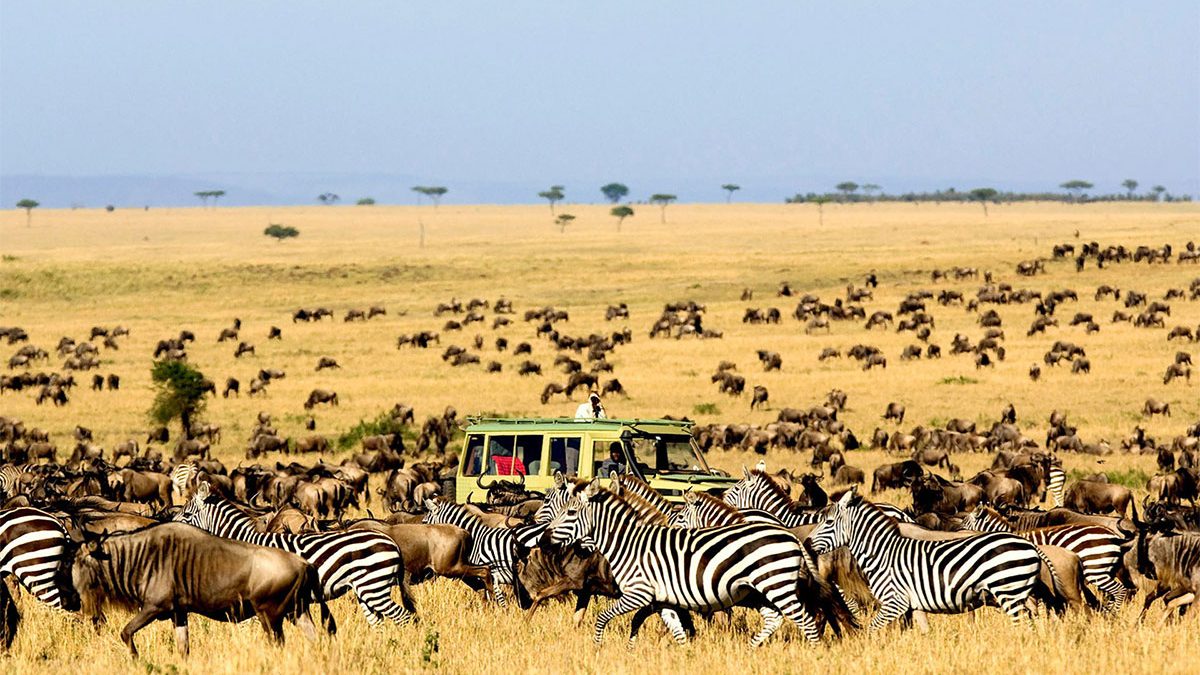 Safari tours to serengeti national park in Tanzania – The word Serengeti means “endless plains” in the language spoken by the Masai who live around Serengeti national park. The park is covered with grassland plains and being in the middle of it offers views of distant landscapes and the only feeling you get is of typical African wilderness.

An African Safari o Serengeti national park means exploring Africa’s best safari park. It is well known for its world’s largest wildlife migration and a high concentration of big cats like lions, cheetah and hyenas. The wildlife migration referred to “the Great Wilder beast migration” is an annual movement of a large group of animals of about 2million, largest wildlife being wildebeest, some zebras and gazelle that move from Serengeti national park northwards to Masai Mara National Park and back to Serengeti. This migration is one of the prime attractions to the park. Other animals in the park include elephant, leopard, buffalo, giraffe, and many antelopes. Serengeti national park is a fascinating place for wildlife viewing throughout the year. Depending on one’s interests about wildlife activities, different months come with different things to see and enjoy. For example, around July to august, wildebeest are approaching Mara River, January to March is when wildebeest are calving and predators are many and easily spotted.

Serengeti national park covers a very large area of 14,750sq km. located in the Northwestern side of Tanzania; it is the oldest park in the country and is a UNESCO world site. It extends to the south of Kenya where is named Maasai Mara national reserve. It is bordered by Ngororngoro conservation area to the southeast, Maswa Game Reserve in the southwest, Ikorongo and Grumeti Game Reserve in the west and Loliondo Game control Area in the east. Serengeti national park has interesting activities that tourist can do or even combine on the same trip. They include;

As earlier said, the largest area of Serengeti national park is covered with grassland plains though there are others where you’ll find riverine forest, woodlands and savannah. The area of the park is really big but is doesn’t disappoint when it comes to wild animals living there. It has big populations of wildebeest, zebra, lion, hyena, giraffe, buffalo, cheetah, hippo, kongoni, impala, and others and all these can commonly be sighted. Black rhinos are also there though rarely spotted. The vegetation of the park is good for viewing these wild animals. They can be viewed throughout the year though different months and periods of the year offer unique sights. More of what to watch is about wildebeest phases of their movement such as crossing rivers Grumeti around June and July and Mara around September. Watching these animals struggle to cross the river is one of the exciting things you won’t wait to see. Your driver guide sets the vehicle at the best place that you can watch them cross, you’ll stay there and wait for the moment the first brave wildebeest will make the decision to cross and then will be followed by others.

Wildlife in Serengeti is viewed through activities of the park; game drives, hot air balloon and guided walking safari. Game drives offer an opportunity to see the commonest predators- lions, cheetah, and hyenas with great chances of finding them on their hunt for calves of wildebeest or antelopes. You may be able to also spot a number of animals when relaxing at your lodge because of the great locations of the lodges overlooking the plains of the park.

Safari tours to serengeti national park – Not only is Serengeti great for wildlife viewing but also a thrilling safari destination that hosts some of Africa’s beautiful bird species. The park has about 500 bird species with a few endemic species in the Serengeti-Masai Mara ecosystem. Endemic species include the grey breasted spurfowl which is commonly sighted in Seronera and Fischer’s lovebird in the woodlands of the park.  The rufous-tailed weaver, grey-chested helmet-shrike and the Usambiro barbe

The birds of Serengeti national park are; grey backed fiscal, red-capped robin-chat, black headed gonolek, ruppell’s vulture, and yellow- throated sand grouse, red-backed scrub, schalow’s Turaco and more. The best time to go for birding in Serengeti is from November to April when migrant birds from Europe and North Africa have arrived. This is also the nesting season for resident birds.

Since Serengeti national park is very large, there are different activities that take place in different sectors of the park and this may happen at different time periods. For example, when we consider the cycle of the behavior of wildebeest, these animals can be viewed at different locations for different experiences such as calving, migrating and more. Game drives are more thrilling in areas where wildebeest live when calving- Ndutu region. You’ll therefore make a choice of the period to visit and the place to stay depending on what you wish to see. Note that the seasons sometimes change and wildebeest migration cycle will not go on exactly the same way as always.

There are many lodges in different sectors of Serengeti national park which you may stay in depending on the activity of interest; they range from luxury to budget safari lodges.

Below is a summary of the different things one can do during different seasons and the best places to stay while in Serengeti.

From January to march, wildebeest settle in Ndutu region and Ngorongoro conservation area since there is abundant water and grass. It is the calving season for wildebeest where thousands of wildebeest calves are born. Predators are attracted in these areas because they want to grab calves for food. This is a perfect time for game drives, rewards are big numbers of lions, cheetah and other cats. A lot of calves die when lions and other cats threaten a herd of wildebeest and some calves are unable to find their mothers again which makes it easy for predators to hunt for them. Those that survive predation join the migration.

By end of March there has been intensive grazing and grass has reduced.

By the beginning of April, there is no grass for the big population of animals and this forces them to start leaving the southern part of Serengeti towards the western side. Tanzania at this time is receiving a lot of rain. This is the best time to view long columns of wildebeest going through the western corridor of Serengeti national park. The animals are heading towards the Grumeti region.

During this period, the rain has stopped and it’s the beginning of the high season in Tanzania and Serengeti to be specific. Largest herds are settling at the southern bank of Rivr Grumeti and others in the central part of the park in Seronera. Seronera at this time is a good place for game drives because predators are many. At Grumeti River, the animals will not cross immediately. They first settle here and wait for the herd to accumulate. Some wildebeests are captured and eaten by crocodiles that live in the river.

Animals continue to cross the river heading to the north heading to another crossing of Mara River, some animals spread eastwards to Lobo. The peak season in the park is getting higher. By the end of the august, many herds have reached and crossed the Mara River. Crossing this river is not easy for the animals but is exciting and catchy for tourists. Animals first watch, failing to decide on whether to cross until the first one gets in the river to cross and the rest follow.

Most animals have arrived in Kenya and are now enjoying the fresh grass of Masai Mara. A few are still crossing while others have settled in north Serengeti. Predators are also looking forward to serious hunting and tourists in Masai Mara want to watch the other annually hosted visitors to the park.

During this time, animals have enjoyed Masai Mara’s grass to the fullest and are actually planning to set off back to Serengeti. The region starts to receive a little rain. By the end of November, all animals have left Masai Mara through Lobo to central Seronera.

The herds are completing their migration cycle. They are on their way back to south Serengeti and others have arrived there already. There is plenty of grass.

Also referred to “the mother of all safari parks”, Serengeti national park is located 208 miles from Arusha at the border of Kenya and Tanzania and Lake Victoria on the western side. This is the country’s oldest national park. It is a home to the big five (lion, leopard, elephant, buffalo and rhino) and is popularly known for having hosting a very large number of game including the prominent wildebeests which you’ll observe during their Great wildebeest Migration. It is also a home to gazelles, zebras, cheetah, warthog, dik-dik, hyena, flamingos and many others.

Serengeti national park is a good park to visit all year round though your travel plan may be adjusted depending on your main interests in the wilderness.

The park has four sectors which each is perfect for different activities.

The central Serengeti and seronera area has beautiful and much wildlife, the area is good for doing full day gamedrives which have to start in the morning for chances of spotting lions.

The Southern plains area gives the best views of the animals especially from December to March but animals are few in the dry season since they will have moved to search for water.

Western Serengeti is a good spot for game and this is also where the animals cross River Grumeti during migration. Crocodiles, hippos and birds are also common sightings at this river.

The northern Serengeti comprises of Loliondo, Lobo and Kogatende. This is the part that stretches into Kenya. The best time to visit this part is from September to October and hunters like lions, cheetahs and leopards are commonly spotted at Lobo.

Hot air balloon is also one of the famous tour activities in Serengeti national park. It is done in the morning for about an hour and you have chances of spotting nocturnal en route. Contact Great Adventure Safaris to book safari tours to Serengeti National park in Tanzania.