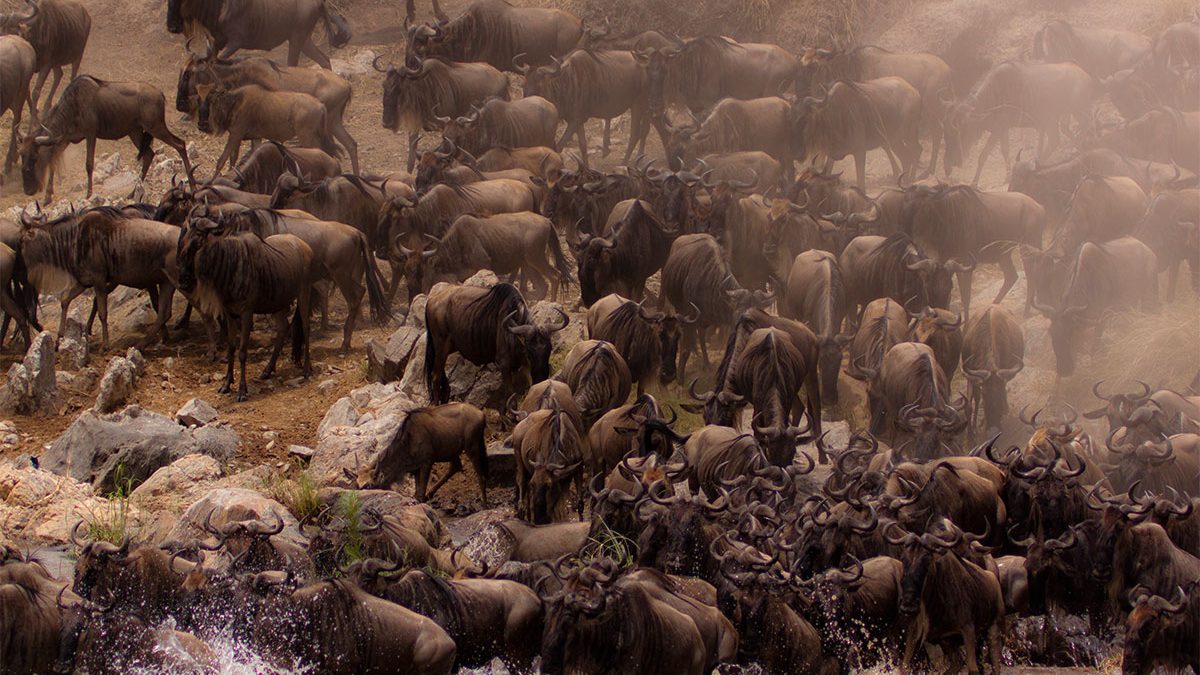 Serengeti great wildebeest migration safari – The Great Serengeti Wildebeest Migration is the movement of vast numbers of Wildebeests, accompanied by large numbers of other wildlife such as the Zebras, Grant’s gazelles, Thomson’s gazelle, Elands and Impalas. These animals move in an annual pattern which is fairly predictable and they migrate throughout the year, constantly searching for fresh grass and water. The precise timing of the Serengeti Wildebeest Migration is entirely dependent upon rainfall patterns each year. This migration, month by month is shown on the Serengeti migration area and the wildebeest migration.

The short rains begin in the early November and little after late November and December; the herds of the wildebeest migration arrive on the short grass plains of Serengeti National Park. These are South and East of Seronera around Ndutu and include the North of the Ngorongoro Conservation Area. Dispersed across these plains, wildebeests and Zebras are everywhere feeding on the fresh nutritious grass and they stay here through January, February and March with most wildebeest calves born in a short window around the month of February. Gradually they spread West across these plains and then around April they start their Great Migration North.

In May the Serengeti’s Wildebeest seem to be moving northwards migrating to seek fresh grazing and water. Areas around Moru Kopjes and West of Seronera is then hectic with a series of moving columns often containing hundreds of thousands of animals joined by Zebras and a scattering of Thomson’s and Grant’s gazelles.

Some of the migration then head north of Seronera but most are usually further west and around June the Wildebeest migration is often halted on the south side of the Grumeti River which has some channels which block or slow their migration to the north. The Wildebeest then congregate there in the western corridor often building up to a density before crossing the River. The River here is normally a series of pools and channels but it’s not continuous and so whilst they always represent an annual feast for the Grumeti River’s large crocodiles and these aren’t usually spectacular as the crossings of the Mara River further north.

The Wildebeest migration continue moving northwards during July and August often spreading out across a broad front some heading through Grumeti Reserve and Ikorongo and others head through the heart of Serengeti National Park.

In September herds spread out across the northern Serengeti where the Mara River provides the migration with its most serious obstacle. This River gushes through the northern Serengeti National Park from Kenya’s adjacent Masai Mara Game Reserve. Watching the frantic herds of the wildebeest migration crossing the Mara River can be very spectacular and there are often scenes of great panic and confusion. It is common to see herds cross the Mara River north on the day and then back to the south a few days later.

In October the wildebeest herds are migrating again with more accord and all are heading south through western Loliondo and in Lobo Area the Serengeti National Park returning to the green shoots which follow the rains on the short grass plains of the southern in November. Contact Great Adventure Safaris to book serengeti great wildebeest migration safari in 201 – 2022 combined with mountain gorilla tracking in Uganda or Rwanda.