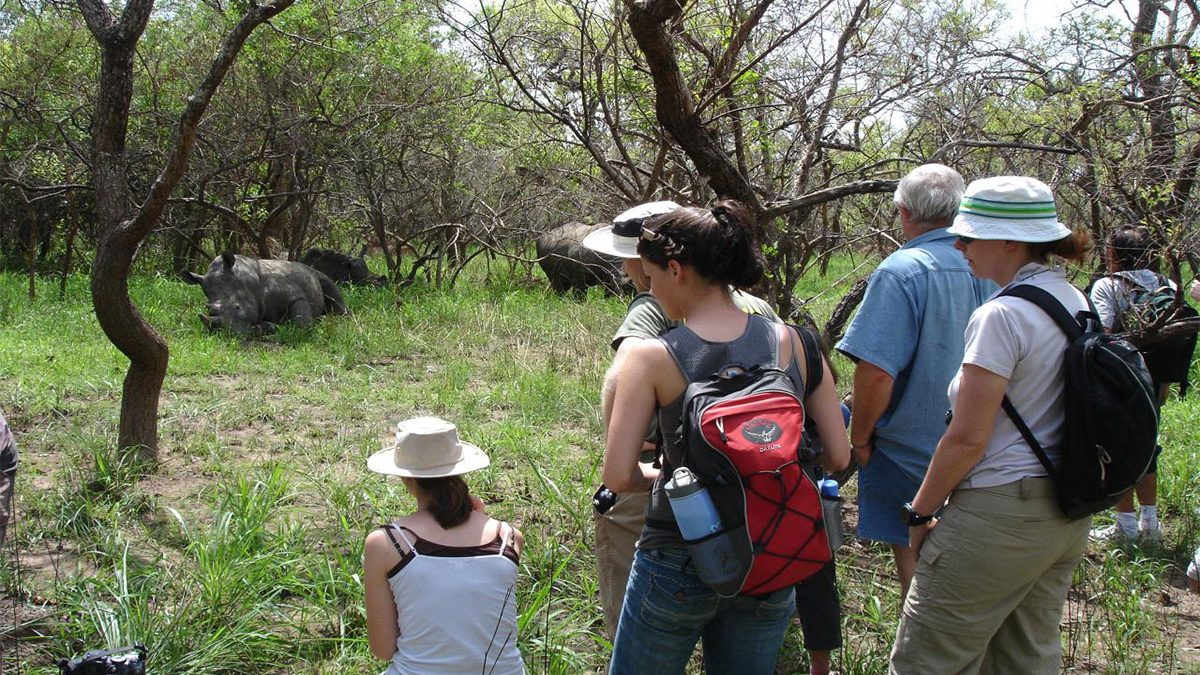 If you are looking for a top  Rhino tracking safari, Uganda is the right place to be. Twenty years Rhinos were extinct in Uganda, the Rhinos are back in Uganda. Since 2002, a private Rhino Sanctuary, seated on a 70-square-kilometres reserve was opened, which was later named Ziwa Rhino Sanctuary.

Ziwa Rhino Sanctuary is a collaborative effort between the Uganda Wildlife Authority, the Rhino Fund Uganda and the Ziwa Rangers Limited. The Southern White Rhinos have been donated by the European Union, Disney world and Kenya in 2005. The Sanctuary is located in Nakasongola district, in the Kafu River Basin, 170kilometres northwest of Kampala. There are now 22 Southern White Rhinos roaming the savannah and wetland, twelve of which were born in the wild in Uganda.

The long-term goal for these magnificent beasts is to reintroduce them in Murchison Falls and Kidepo Valley National Parks. Sadly, the situation is far grimmer for the Northern White Rhino, which was indigenous to Uganda. It is now so close to extinction there’s little hope for its survival. There are only five confirmed members of the species left, all of them living in captivity.

The Rhinos in Ziwa Rhino Sanctuary are very well protected because a team of about 80 park rangers and security guards keep a 24-hour watch on the rhinos to ensure their safety.

Additionally, the 70 square kilometres Ziwa Rhino Sanctuary is surrounded by a 2 metres electric fence to keep the rhinos in and the intruders out.

Ziwa Rhino sanctuary is the only place to trek wild Rhinos in Uganda, the other Rhinos are found at the Uganda Wildlife Education Centre (former Zoo) in Entebbe town. On arrival at the sanctuary, you will be given a briefing from your ranger guide on how to behave while on this Rhino trek. It is very critical that you heed to the ranger’s instructions while on the trek because Rhinos can be aggressive if they sense a need to defend themselves.

Depending on the location of the Rhinos, you may need to drive closer to their location before you start the trek to reduce on the distance. Your ranger guide will share different information on the behaviour of Rhinos and how you ought to behave while as you trek. The same guide will lead you on an up-close encounter, either in your vehicle (a car is fine in the dry season, but you will need a 4WD in the wet) or hire their car at a fee.

Once you reach the rhinos you finish your visit on foot. While tracking rhinos on foot sounds a bit foolhardy, the fact that they’re in the company of armed anti-poacher rangers 24 hours, means they’re well and truly used to human presence. Once you locate the Rhinos, you can stay a maximum of one hour in their presence. Sometimes different families are within distance of each other, in which case you will get an opportunity to visit more than one group.

Other animals living inside the 6ft-tall electric fence include leopards, hippos (which you may not see), crocodiles, bushbucks and Oribi.

Ziwa Rhino Sanctuary is also home to 350 species of birds, and bird watching is another activity you can do here, with highlights including the giant kingfisher, Ross’s Turaco and shoebill. The latter are best seen on early morning shoebill canoe trips to an adjoining swamp, where you’ve got a very good chance of spotting them. The Ziwa Rhino Sanctuary allows visitors to do Rhino tracking at the sanctuary and a small fee is charged.

There are currently 22 white Rhinos in the Ziwa Rhino Santuary, which you will enjoy while on your top Rhino tracking safari in Uganda.

You can visit the Ziwa Rhino Sanctuary as a destination or visit it on your way to or from the Murchison Falls National Park. Contact Great Adventure Safaris to plan your Rhino tracking safari in Uganda.