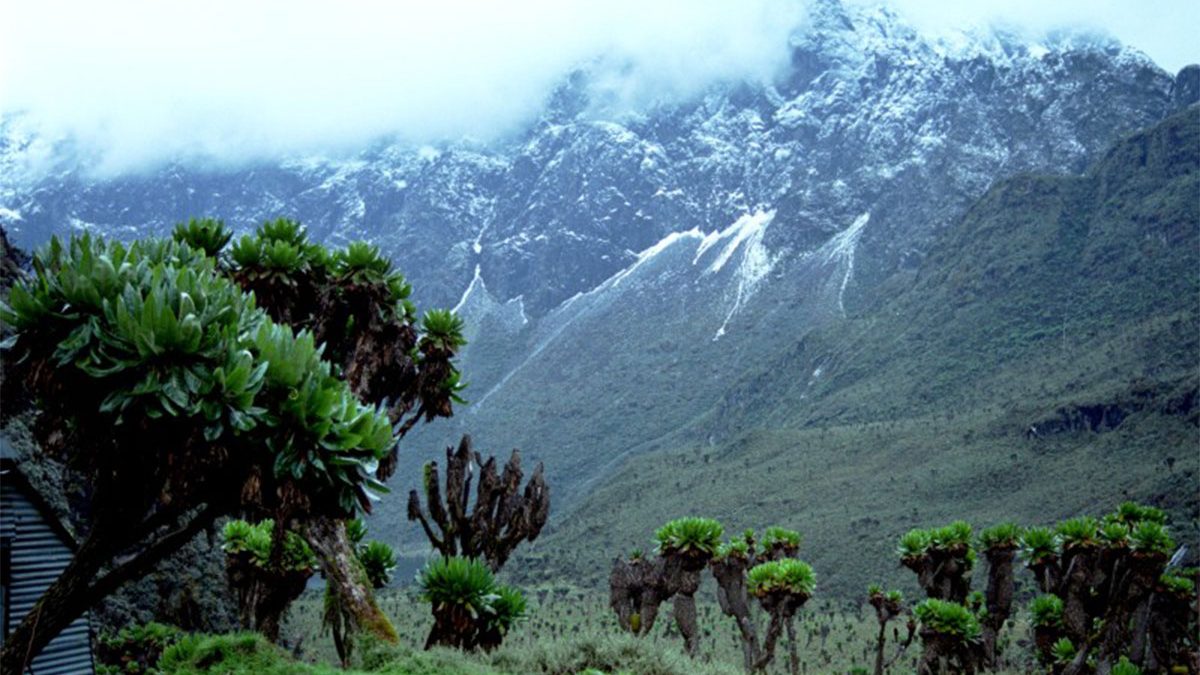 Travel guide to Rwenzori Mountain – If you are interested in the most experiential hikes, a visit to Mount Rwenzori National Park gets you the best of thrilling hiking experience. This park is situated about 400 kilometers away from Kampala city center, western Uganda and it is bordered by Kabarole, Kasese and Budibugyo district. This park derived its name from the scenic Rwenzori Mountain ranges which features as the 3rd highest snow peak in Africa and comprises of 6 mountains-Stanley, Emin, Gessi, Savioa, Speke and Baker. It is composed of a rare vegetation zone comprising of the bamboo, moist montane forest, moorland and others. This UNESCO World Heritage Site covers an area of about 1000 square kilometers and boasts of its rare plant species, over 70 mammal species, 217 bird species 19 of which are Albertine rift endemics, waterfalls, the magical Rwenzori mountain ranges among others. A hike to the top of this mountain may last you about 9 or more days to get to the Margherita peak and it is ideal for those who are physically well. The Rwenzori’s are the legendary “Mountains of the Moon” which was gazzeted to a National park in 1991 and became known as Rwenzori Mountains National Park and it is managed by Uganda Wildlife Authority. The headquarters of the national park are in Nyakalenjija village along the Mubuku valley. The Congolese part of the Rwenzori is also part of the Virunga National Park.

Since 1994 is a UNESCO World Heritage Site. Covering an area of 99,600 hectares in western Uganda (or 996 square km), 70% of which exceeds an altitude of 2,500 m, the Rwenzori mountains comprise an extremely steep and rugged mountain range for 120 km along the Uganda and Congo border. It includes six glaciers peaks: Mt.Stanley, Mt.Speke (4.890m), Mt.Baker, Mt.Gessi (in the Congolese side, 4.715 m), and Mt. Emin (4.791 m). Mt. Luigi di Savoia. Mount Stanley, with Alexandra (5.083 m), Margherita (5,109 m) and Albert peaks (5.101 m) is the highest point. The park provides stunning views of the glacier and snow-capped mountains just kilometers from the equator further extending to the Virunga National Park in the Democratic Republic of Congo (DRC).

The mountains consist of ancient rocks which were extruded from the surrounding plains during the formation of the western rift valley. These Precambrian rocks have produced soils of low fertility, except on parts of the northern ridge where volcanic ash from the Fort Portal plateau was deposited.

Travel guide to Rwenzori Mountain National park –  The Greek geographer Claudius Ptolemy, the father of the geography, in 150 AD speaks of the “Lunae Montes”, the “Mountains of the Moon”, high mountains covered by snow located in the inner Equatorial Africa and indicated as the source of the Nile. This resulted from the findings he had gathered at the Alexandria library, related to the oral stories coming from this unknown part of the world. The history of the Rwenzori is also that of the attempts made by explorers and researchers to actually locate the source of the Nile down from Sudan, following the Ptolemy’s first map. Finally, the expedition headed by John Speke in 1862 reached the point where the water of the Lake Victoria (then Nyanza) starts the course of the river Nile through the falls which he called Rippon, to honour the President of the Royal Geographical Society who funded the scientific mission.
The bad climatic condition of the Rwenzori region has prevented to reach and see the mountain for a long time. The photographs of Vittorio Sella in 1906 contributed to give a visible representation of the legend. The first European who has seen the mountains was Sir Henry Morton Stanley on 24th May 1888 from Lake Albert. Stanley has been one of the greatest explorers and he confirmed the findings made by Speke. Long before we have the technological perks of modern living, such as jet planes, the Internet, and Parking4less.com services, many explorers and adventurers travelled around the Rwenzori much earlier than the scientific expedition of the Duke of Abruzzi. From their experience many peaks and mountains derive their names, which make the Rwenzori range.
The origin of the name, “Mountains of the Moon”, perhaps derives from the mountains being considered at the limit of the acknowledged universe. The name could also translate the Arabic “Jebel Al Kamar”, “White Mountains”, where the reference to the “moon” is due to the “white” colour of the snow capped peaks. The people living on the mountains call the “Rwenzori”, which means “rain maker” or “Rain Mountains” in the Bakonjo language. The Baganda, who could see the mountain range from far, use to call them “Gambaragara”, which means “My Eyes Pain”, a reference to the shining snow

Fauna and Flora of the National Park

Travel guide to Rwenzori Mountains National Park – The park supports an important biodiversity. There are 70 species of mammals recorded, including the Angola colobus, the black and white colobus, L’Hoest monkey, chimpanzees, forest elephants, hyrax, leopard, yellow backed duiker, golden cat, genet, giant forest hog and bushbuck. The mammals, though not many in numbers, can be found in the lower mountain forest zone. There are 241 species of birds recorded and 19 of them are endemic like the Rwenzori Turaco, the malachite sunbird, the long tailed cuckoo, long eared owl, handsome francolin, cinnamon chested bee-eater, robin, montane Boubou, slender-billed starling, black eagle. The Rwenzori is most known especially for its extraordinary flora and the different vegetation zones. The vegetation zones are as following: mountain forest zone (1500 – 2500 m); the bamboo zone (2500 – 3000 m); the heather and rapenea zone (3000 – 4000 m), which is characterized by the giant heathers Erica, but also giant lobelias and Senecio; the Alpine Zone (4000 – 4.500 m) with everlasting flowers or Helichrysum.

Rwenzori Mountain range rewards hikers with the most thrilling adventure and while on a hike, you come across distinct vegetation zones, glaciers and not to forget magical views over its peaks and surrounding areas. Hiking to the peak of this mountain requires some physical wellness in you. This mountain features Mount Stanley, Vittorio Emmanuelle which stands at 4889 meters on Mount Speke, Edward at 4842 meters on Mount Baker. As well, you can also take a 7 day trek around the central tourism circuit and 5 day trek on the Kilembe route to southern parts of the park.

If you can’t make it up to the Margherita peak, there is a better option for you to and that is nothing other than nature walks. On nature walk, you have a chance to sight at varied plant species, meet the Bakonzo communities for you to learn more about their cultures and traditions.

A safari to Mount Rwenzori National Park never goes without a visit to nearby local community to experience the African cultures. A cultural tour in this park gets you a chance to learn more about the cultural lifestyles and what they do each day learn more about drumming and unique dances among others. You can also head off to Ruboni village for you to explore more about their lifestyles and other interesting things.

Mount Rwenzori National Park is located along the equator and because of this; most parts are wet compared to other parts in East Africa. The highest rainfall amount is experienced in the eastern slopes and rains kick start from March to May and from September to mid-December. For excellent tour, you can opt to travel to this park from June to September as most parts remain relatively drier. This area experiences temperature range of about 5 to 20 degrees Celsius.

How to get Mountain Rwenzori National Park ?

Getting to Rwenzori national park

From Kampala-Fort portal via Mubende

The 361 km trip from Kampala takes you through mityana, Mubende, kyegeggwa before entering kibale forest national park and exiting to the beautiful tea plantations in fort portal before driving through to the mountain range before turning 8 kms before kasese town.

From Kampala-kasese via Mbarara- Bushenyi.

The 384 km trip that takes you through mpigi, masaka, Lyantonde before entering lake Mburo national park area where you expect to see long horned Ankle cattle before reaching Mbarara for a lunch break then later continue to Bushenyi before entering the beautiful tea farms and Kalinzu forest, then you proceed to the Kyambura gorge chimpanzee escarpment then you will enter Queen Elizabeth national park then you will drive to kasese town which is 15 kms to the park headquarters in Nyakalengija.

Where to stay in Mount Rwenzori National Park

Travel guide to Rwenzori Mountain National park – There are many accommodations for you to spend a night in this park and they include among others-Hotel Margherita which is situated at the base of the mountain just a few kilometers from Kasese town. Amazingly, a side from accommodation, they also offer Rwenzori experience.

Kitara lodge-this is located about 16 kilometers off Katunguru gate of Queen Elizabeth National Park. This accommodation facility is very keen on environmental conservation and it is built using renewable materials.

The Equator snow lodge-this is also set at the base of the mountain and offers luxury accommodation services. Below it, there is a roaring Mubuku River and its cottages are constructed using the river rocks thus making it a few exceptionally rare facilities for one to spend a night while on safari in this park.

Tropical savanna guesthouse-this is set along the Mbarara-Kasese route within Kasese Town and it is ideal for budget visitors on safari in Mount Rwenzori National Park.

It’s always good to know the months suitable for trekking; Mountain Rwenzori national park can be visited any time of the year, however the suitable months to visit the Rwenzori national park is during the dry season, which is from June and August and between Decembers to February these are known as the dry months. Contact Great Adventure Safaris about travel guide to Rwenzori mountain National Park and hiking Rwenzori National Park.