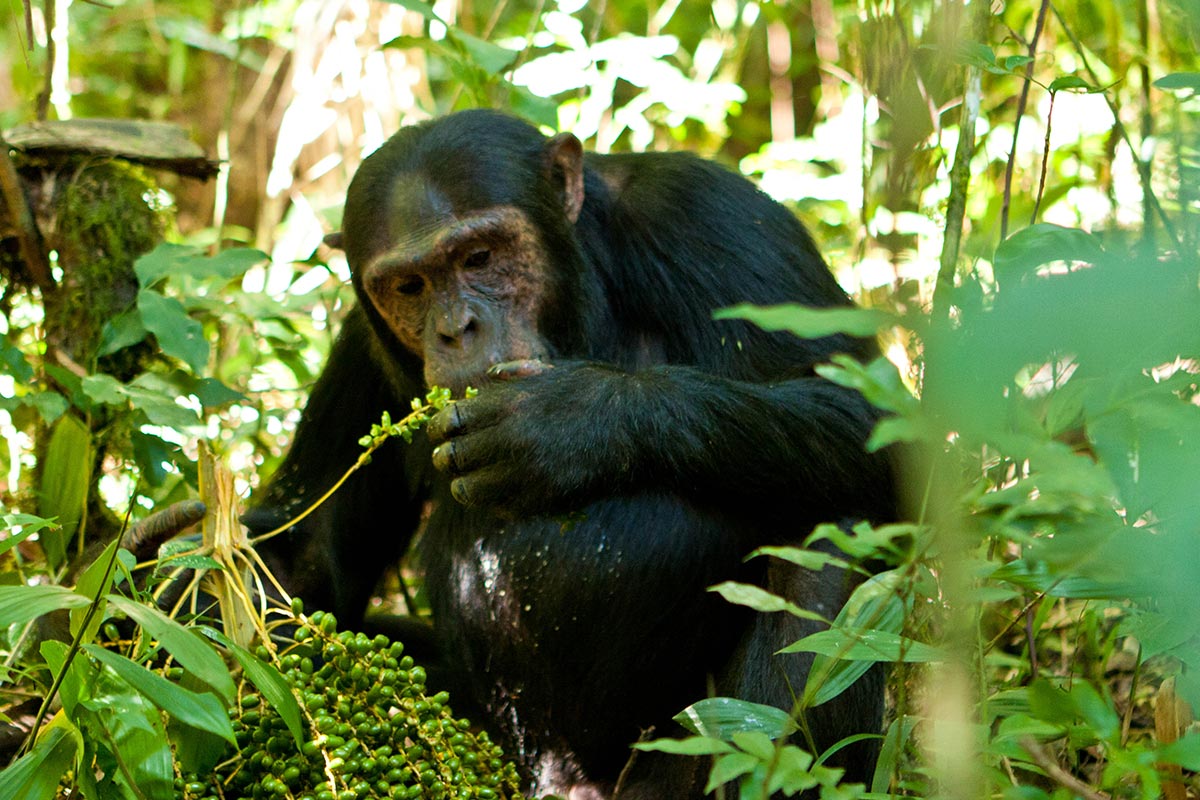 Kibale National Park is a home to our close relatives the Chimpanzees with a variety of 325 different bird species with the endemic spice the Green breasted pita, with other 12 species of primates, 351 tree species, and different species of mammals including Giant forest hogs, Bush pigs, Elephants, Buffaloes, and many other Wildlife species.

Kibale National Park is composed of 395 square kilometers of the land that can be accessed on foot, it is well known of being the best Uganda’s tropical rain forest which inhabits primates like the Chimpanzees, it is also endangered with Olive baboons, Black and white colobus monkeys, red colobus which makes Uganda to be the best tourism site in East Africa and one of the World heritage site.

The Park receives an average annual rainfall that equal to 700 meter in the year which occurs in the months of March, May, September and November. It also ranges an average temperature of 14 c to 27 c where the terrain drops do occur in the open grassland of the forest.

The Chimpanzee trekking is like the delightful ape’s attraction which has made Uganda to become the famous safari destination in East Africa and a World heritage site. The National Park became government reserve in 1940 and in 1991 it was established now it is in the hands of Uganda wildlife Authority.

Kibale Forest National Park is one of the forests which consist of a mixture of green trees with variety of swamps, ferns, shrubs, Savannah woodland and it is an open grassland that support the wildlife with in this protected area.

Kibale Forest National Park is well known to be with the highest population of primates in East Africa, Chimpanzee trekking can be done by the tourist in Kibale Forest and it takes 2-3 hours. With Park ranger guides walk through the natural habitat, trekking the Chimpanzees and always in a group of six people per trek and it costs USD150.00 per person per trek. Chimpanzee tracking is done twice a day AM and PM depending on your Chimpanzee permits availability the time of purchase.

Kibale National Park is only place that offer Chimpanzee habituation experience in the world that allows you to stay with them and the researchers for the entire day starting from 6:30 AM to 6:00 PM depending on your interests. This gives you a chance to learn more about their behaviors and their day activities. Chimpanzee Habituation permits costs USD200.00 per person per trek.

Kibale National Park offers guided nature walks and night walks in the forest which allows you more time to explore and enjoy the nature.

Kibale National Park is surrounded by the local people who are hunter gatherer; they do feed on Kibale Forest food such as vegetables, fruits. These people act as a tourist attraction to visitors they do, dance, music and hand making crafts and it gives you a chance to learn about their life style and also their day to day activities. Kibale Forest National Park can be visited any time of the year.