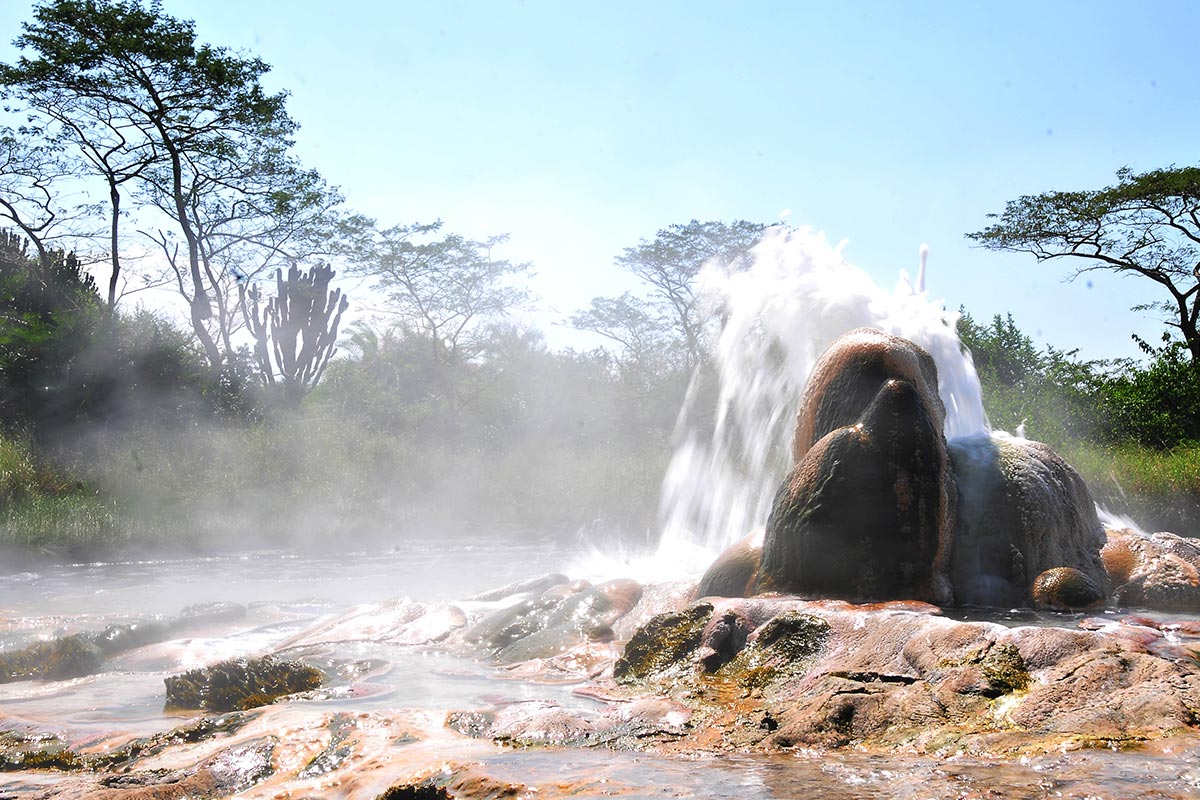 Hot springs Africa’s Rift Valley has bestowed Uganda with some of its most memorable geographical features – conical volcanoes, deep chasms and bubbling thermal springs. Spewing an enormous steam cloud across Semliki National Park’s emerald landscapes, the Sempaya Hot Springs are certainly one of the country’s most unusual scenic offerings.

In addition to the hot springs, the unique bird life is a special attraction to bird watchers. Primates and some Buffaloes, Elephants, Pygmy, Hippos and many more

Semuliki National Park sprawls across the floor of the Semliki Valley on the remote, western side of the Rwenzori Mountain. The National Park is dominated by the easternmost extension of the great Ituri Forest of the Congo Basin. This is one of Africa’s most ancient and bio-diverse forests; one of the few to survive the last ice age, many years ago.

The Semliki Valley contains numerous features associated with central rather than eastern Africa. Thatched huts are shaded by West African oil palms, the Semliki River (which forms the international boundary) is a miniature version of the Congo River, the forest is home to numerous Central African wildlife species, and the local population includes a Batwa Pygmy Community that originated from the Ituri forest. As a result, this Park provides a taste of Central Africa without having to leave Uganda.

While Semuliki’s species have been accumulating for over 25,000 years, the National Park contains evidence of even older processes. Hot Springs bubble up from the depths to demonstrate the powerful subterranean forces that have been shaping the rift valley during the last 14 million years. Many visitors who visit this Park always enjoy the adventure as they boil food like eggs and potatoes in the hot water springs which gives you an adventurous visit to Semliki National Park.

The park lies within the Albertine Rift Valley on a flat land that ranges from 670 to 760meter above the sea level.

The Park is a tropical rainforest with average of 1250 meters with peak seasonal rainfall that normally occurs in the month of March, May, September to December of a total average temperate that varies from 18 to 30 c of its area.

Viewing of the Sempayo hot springs

The Park has two hot springs that leads you through a patch of the forest where red tailed moneys grey cheeked Mangabey do exist, the male spring known as Bitende which is 12 meter in diameter, female hot springy Nyasimbi for boiling food and eggs which act as tourist attraction. Read more about Sempaya hot springs in Uganda

The National Park is a forest reserve where tourist can do nature walks and hiking, and can be able to spot different tree species, over 300 species of birds like yellow throated nicater, white throated, blue billed marimba and many other species which are tourist attraction to visitors.Read more about nature walks and hikes

The Park is surrounded by number local people the Batwa pygmy who entertain visitors in music, dance storytelling and also do hand making crafts that attract a lot to tourist and tourist buy them for remembrance.

Semuliki National Park has a game reserve with three tracks that cross the savanna grassland of Toro wild life reserve, forest with number of species including warthog, Uganda kob, Buffaloes, Water buck, Leopards and since it has Semliki River where tourist can view water animals like crocodiles, hippos which act as attractions to tourist and they can be guided by the guide.

Semliki National Park is rewarded of being the best Africa’s forest birding destination that can be viewed in Sempaya of over 300 bird species such as the Shoe bill stork, Red billed dwarf horn bill, Piping horn bill, White crested horn bill, Yellow throated nicator and many other species.