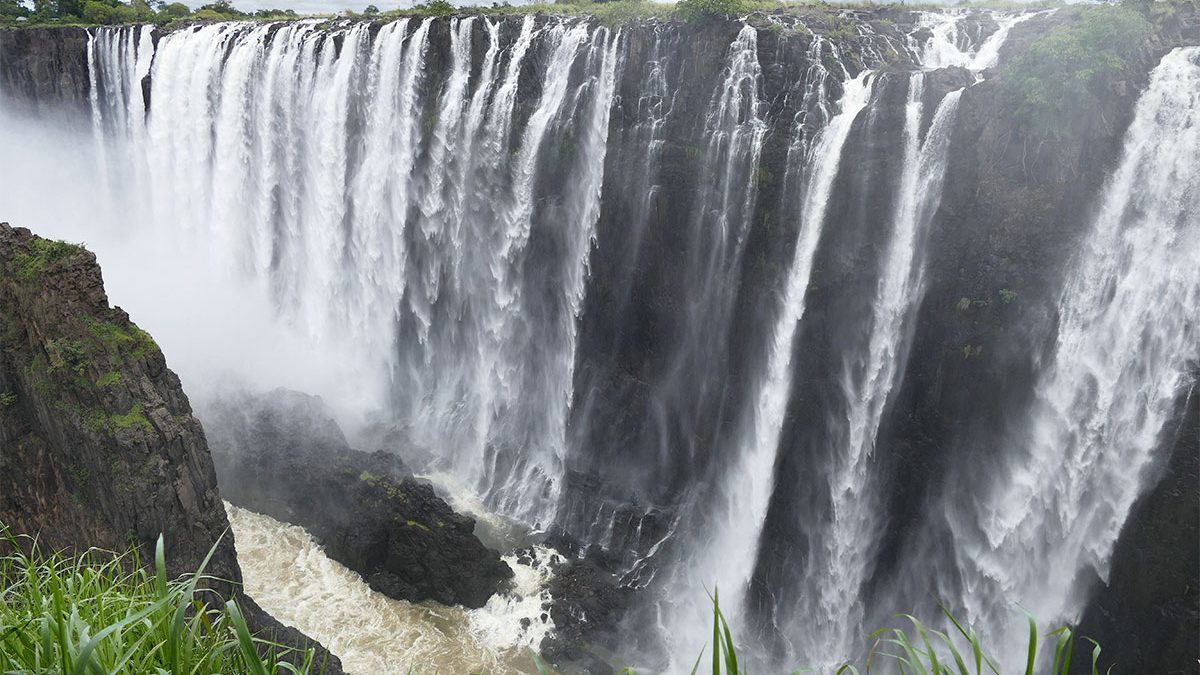 Victoria falls Zimbabwe-Zambia border – Victoria Falls “The Smoke That Thunders”, “Boiling Water” is a waterfall on the Zambezi River in southern Africa, which provides habitat for several unique species of plants and animals. It is located on the border between Zambia and Zimbabwe and is considered to be one of the World’s largest waterfalls due to its width of 1,708 metres.

David Livingstone the Scottish missionary and explorer, is believed to have been the first European to view Victoria Falls on 16 November 1855, from what is now known as Livingstone Island, one of two land masses in the middle of the River, immediately upstream from the falls near the Zambian shore. Livingstone named his sighting in honour of Queen Victoria of Britain, but the Sotho language name, Mosi-oa-Tunya “The Smoke That Thunders” continues to be commonly used, but the World Heritage list officially recognises both names. Livingstone also cited an older name, Seongo or Chongwe, which means “The Place of the Rainbow”, as a result of the constant spray. Victoria Falls Zimbabwe-Zambia border is classified as the largest, based on its combined width of 1,708 metres (5,604 feet) and height of 108 metres (354 feet), resulting in the world’s largest sheet of falling water.

Victoria falls are formed as the full width of the River plummets in a single vertical drop into a transverse chasm 1,708 metres (5,604 feet) wide, carved by its waters along a fracture zone in the basalt plateau. The depth of the chasm, called the First Gorge, varies from 80 metres (260 feet) at its western end to 108 metres (354 feet) in the centre. The only outlet to the First Gorge is a 110-metre-wide (360 feet) gap about two-thirds of the way across the width of the falls from the western end. The whole volume of the River pours into the Victoria Falls gorges from this narrow cleft.

Victoria Falls presents a spectacular sight of awe-inspiring beauty and grandeur on the Zambezi River, forming the border between Zambia and Zimbabwe. It was described by the Kololo tribe living in the area in the 1800s as ‘Mosi-oa-Tunya’ ‘The Smoke that Thunders’. In more modern terms Victoria Falls is known as the greatest curtain of falling water in the world.

Columns of spray can be seen from miles away as, at the height of the rainy season, more than five hundred million cubic meters of water per minute plummet over the edge, over a width of nearly two kilometres, into a gorge over one hundred meters below. The wide basalt cliff over which the falls thunder transforms the Zambezi from a placid River into a ferocious torrent cutting through a series of dramatic gorges.

Facing the Victoria Falls is another sheer wall of basalt, rising to the same height, and capped by mist-soaked rain forest. A path along the edge of the forest provides the visitor prepared to brave the tremendous spray, with an unparalleled series of views of the falls. One special vantage point is across the Knife-edge Bridge, where visitors can have the finest view of the Eastern Cataract and the Main Falls as well as the Boiling Pot, where the river turns and heads down the Batoka Gorge. Other vantage points include Livingstone Island the falls Bridge, Devils pool and the Lookout Tree, both of which command panoramic views across the Main Falls.

Victoria Falls Zimbabwe-Zambia border  is one of the greatest attractions in Africa and one of the most spectacular waterfalls in the world, Victoria Falls is located on the Zambezi River, the fourth largest river in Africa, which is also defining the border between Zambia and Zimbabwe.

By the end of 1990 nearly 300,000 people were visiting the falls each year. Victoria Falls is a UNESCO World Heritage Site, and the citizens of both Zambia and Zimbabwe no longer have fear of the “the smoke that thunders”, and are successfully developing the tourism on both sides of the river.
The falls were formed in a zone of crustal faults. On the crest of the fall numerous islands divide the main flow into several branches. During floods, the water flow capacity reaches half a million litters of water per minute.

The water level varies throughout the year; it is at its peak in April, at the end of the rainy season when on average 500,000,000 litters of water flow and it is at its lowest level in October and early November.

Interestingly, during the dry season the water level in the Zambezi River drops sharply, and it becomes possible to walk through some parts of the waterfall. However, during the rest of the year Victoria Falls is a roaring machine that strikes anyone with its power.