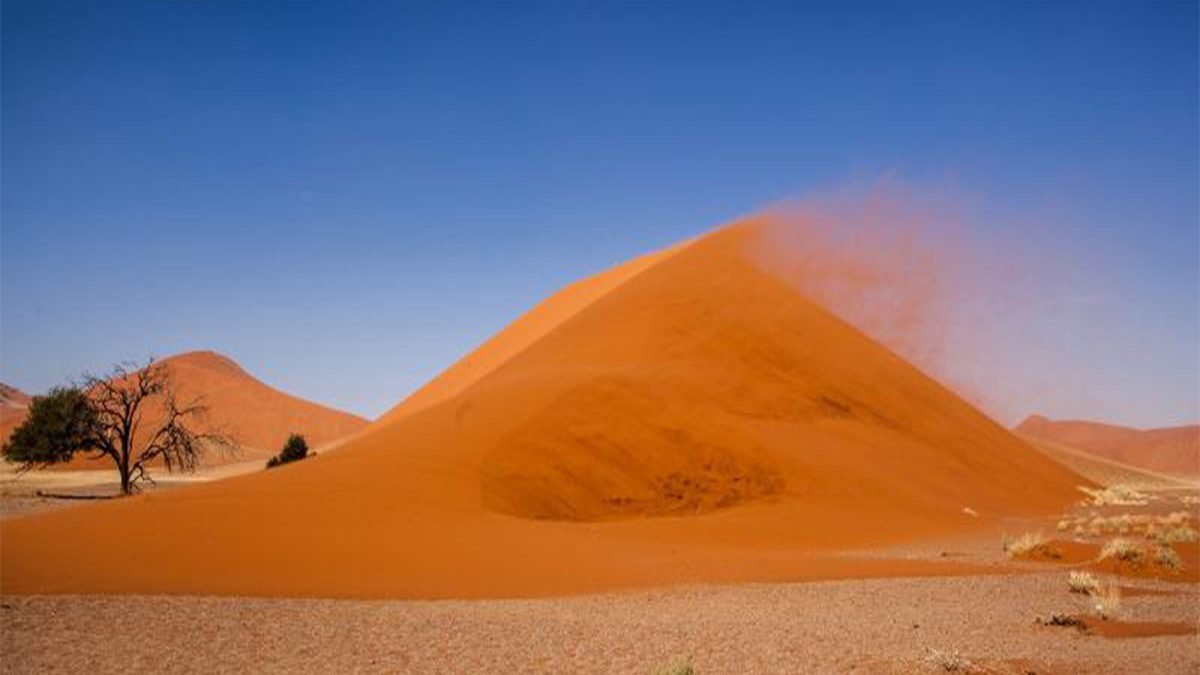 Visit Namib Naukluft National Park Namibia – Originally created by the Germans to form a buffer against encroaching British interests, Namib-Naukluft National Park has expanded over the years to become the nation’s largest conservation area. Protected within its boundaries are some stunning sights that you just have to see if you’re visiting Namibia. With ancient archaeological sites dating back over 200,000 years, a wealth of abundant wildlife and mesmerizing otherworldly landscapes; this national park certainly has something that will appeal to everyone. Possibly the most famous sight in the whole of Namibia are the towering sand dunes at Sossusvlei. Under the perfectly blue sky, beautiful red sand dunes form a stunning backdrop to the withered and burnt black trees that emerge from the white sands down below. The mosaic of contrasting colors is indefinably remarkable and a must-see in the country.

The marvelous canyons at Sesriem are also fantastic to explore as are the mountain ranges within the parks. Like at Skeleton Coast National Park, a number of shipwrecks are dotted along the coast, testifying to the brutal and unforgiving power of the ocean just off the shore. Somewhat mirroring the ocean in terms of its harsh environment, the arid and dry desert is now home to some abandoned towns that make for interesting exploring, their former inhabitants having long moved away.

The Namib is the oldest desert in the world and extends far beyond the borders of the National Park and includes the whole of western Namibia. The part of the Namib within the Park is about 500 km long and between100 to 180 km wide. Here the highest dunes worldwide are found, which reach a height of up to 300 meters.

The Naukluft Mountains, nearly 2000 metres high, form the eastern extension of the Park.

Sandwich Harbour is situated in the north of the Park, about 45 km south of Walvis Bay. It consists of a 10 km long bay or lagoon, surrounded by dunes and vegetated by reeds. This bay is home to more than 200,000 birds (flamingos, cormorants, pelicans and other sea birds) and can only be reached by 4×4 from Walvis Bay.

Sossusvlei and Sesriem are the main attractions of the Namib Naukluft Park. At Sesriem the Tsauchab River has dug an approximately 1 km long and 30 metre deep canyon into the ground. Sossusvlei is the name of a salt-clay pan surrounded by dunes and is approximately 60 km away from Sesriem.

The major parts of the Namib Naukluft Park are inaccessible for humans. Of the huge area of which 32,000 km² exist of dune fields only the area north of the Kuiseb River, the Naukluft Mountains and the Sossusvlei can be visited.

Since 2010 the Namib Naukluft Park belongs to the Namib Skeleton Coast National Park, which is the biggest protected area of Namibia and the eight biggest worldwide. This Park was formed by the merging of the Skeleton Coast Park, the Namib Naukluft Park, the Restricted Diamond Area and the Dorob National Park as well as the Fish River Canon and the marine reserve Meob-Chamais. This newly developed Namib Skeleton Coast National Park stretches along the entire Atlantic coast of Namibia, from the border of Angola in the north down to the border of South Africa in the south and has a length of 1570 km.

Where to stay when you visit Namib Naukluft National Park