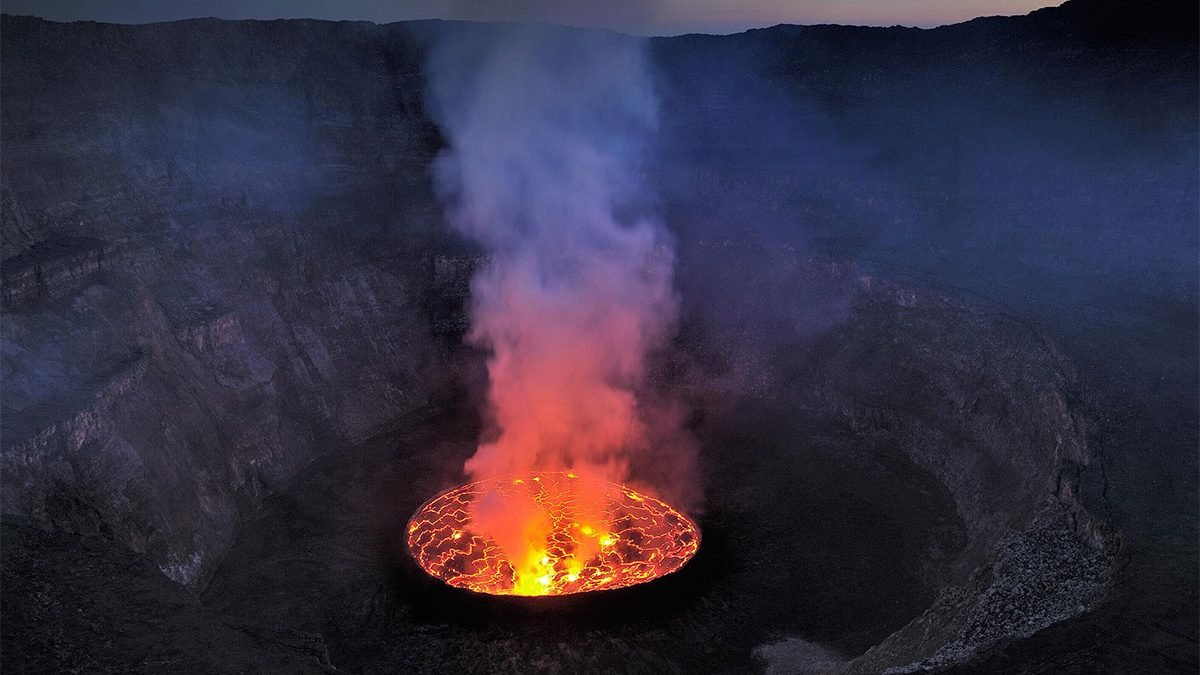 What country is Mount Nyiragongo volcano located in? – Democratic Republic of  Congo

What country is mount Nyiragongo volcano located in? – Mount Nyiragongo is an active volcano in the Virunga Mountains of East-Central Africa. It lies in the volcano region of Virunga National Park in the Democratic Republic of Congo (Kinshasa), near the border with Rwanda, 12 miles north of Goma town.

It is 11,385 feet (3,470 meters) high, with a main crater 1.3 miles wide and 820 feet (250 meters) deep containing a liquid lava pool. Some older craters on the mountain are noted for their plant life. Mount Nyiragongo is known for its devastating eruptions. In 1977 some 2,000 people were killed, and in 2002 Goma town was largely destroyed by lava, creating a refugee crisis.

The main crater is about 1 mile wide and usually contains a lava lake. The crater presently has two distinct called lava benches within the crater walls one at about 3,175metres (10,417 feet) and a lower one at about 2,975metres (9,760 feet). Mount Nyiragongo’s lava lake has at times been the most voluminous known lava lake in recent history.

The depth of the lava lake varies considerably. A maximum elevation of the lava lake was recorded at about 3,250metres (10,660 feet) before the January 1977 eruption a lake depth of about 600metres (2,000 feet). Following the January 2002 eruption, the lava lake was recorded at a low of about 2,600metres (8,500 feet), i.e., 900 meters below the rim. The level has gradually risen since then. Mount Nyiragongo and nearby Nyamuragira are together responsible for 40% of Africa’s historical volcanic eruptions.

They range from olivine-rich through leucites to nephelinites, containing, in various proportions mainly the minerals nepheline, leucite, melilite, kalsilite, and clinopyroxene. This very low silica composition results in eruptions with unusually fluid flows. Whereas most lava flows move rather slowly and rarely pose a danger to human life, Nyiragongo’s lava flows may race downhill at up to 100 km/h (60 mph).