Why is Uganda called the pearl of Africa? 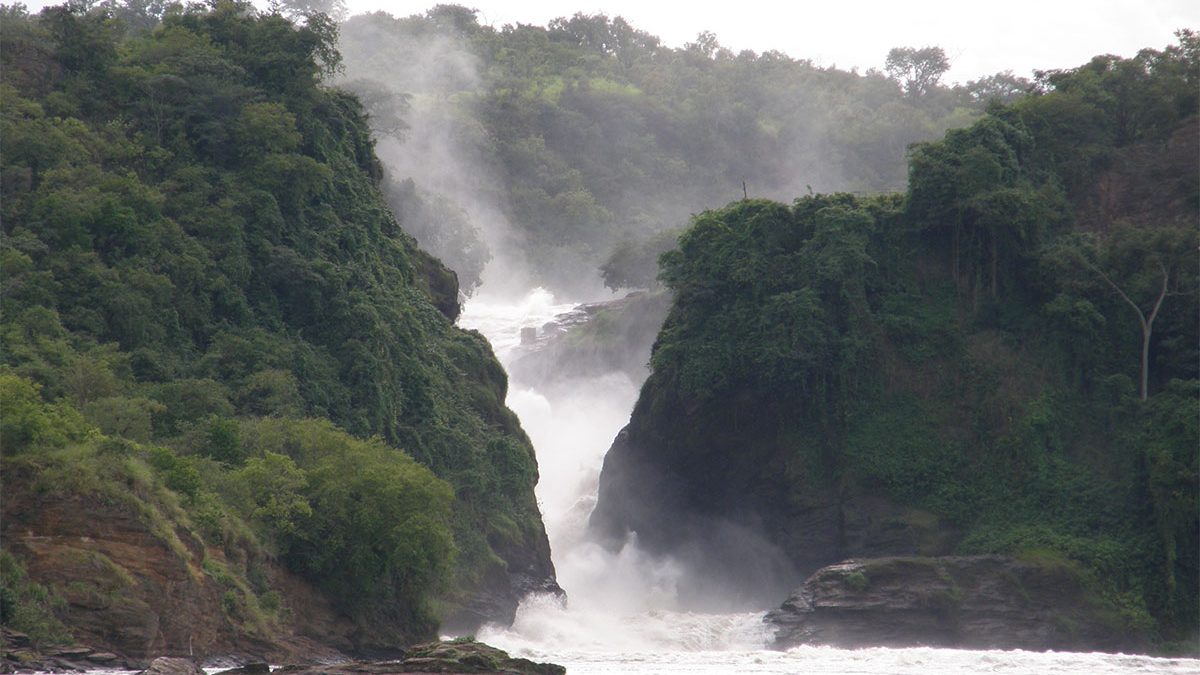 Why is Uganda called the pearl of Africa? – Mountain gorillas and Murchison falls National Park, visit the source of River Nile

During the 1907 Winston Churchill had a trip in Uganda when he discovered that Uganda offers a lot more beyond once imagination. In 1908, he wrote a book entitled ‘’My African Journey’’ referring to his trip in Uganda. There are no many wards to describe Uganda, the best thing to do, is to visit the country and you will clearly understand why Winston Churchill referred Uganda to the Pearl of Africa.

Uganda is a unique country compared to other East African countries, when Winston Churchill visited Uganda, what he discovered in Uganda, mesmerized him that even prompted him to write a book about he found Uganda.  in his famous quotes, he wrote “For magnificence, for variety of form and colour, for profusion of brilliant life bird, insect, reptile, beast for vast scale Uganda is truly “the Pearl of Africa.’’

Uganda is referred to as the Pearl of Africa due to its biodiversity ranging from the number of tourist attractions, the people, the different cultures, the weather and climate among others, define the name as the ‘’Pearl of Africa’’. However, for other European explorers and discoverers that visited Uganda felt similar about Uganda just as Churchill described Uganda to be. Many people today in Uganda and in Africa, attribute the name ‘’Pearl of Africa’’ to Winston Churchill description about what he discovered in Uganda, therefore, the other explorers in Uganda, spoke fascinating things about what they found too in Uganda and too referred the country indeed to be the Pearl of Africa.

There many explorers that came to Uganda year back before even Winston Churchill arrival in Uganda. They were so acquainted with the country due to its beauty, natural wonders, the people, the colour and the climate among other unique features that can describe Uganda. and later when modern transportation came to existence, today, may tourists visit Uganda all year round thank you to the great deeds of Winston Churchill that made Uganda one of the great countries In Africa that is a must Visit. Many tourists have visited Uganda and many have visited more than Twice in their life time, Uganda is indeed the ‘’Pearl of Africa’’.

In 1858, John Hanning Speke and Richard Burton ventured through the Buganda Kingdom and were so amazed by what they discovered; he was famed for being the first explorer to visit Lake Victoria and named it as the source of the Nile. He also discovered various things about the Buganda region, the local cultures, the way of life of people, he travelled much through the western safari circuit in Uganda and he was impressed by what he discovered in Uganda.

Later his journey while in Uganda, was popularized through the movie ‘’mountains of the moon’’, whereby his discovered where no believed until when it was proven Samuel Baker and Florence Baker when they visited Uganda. Later John Hannington met his sudden death.

Later Fredrick John Lugard, the British explorer that saved Uganda from the French and later was colonised by the British, also wrote, Henry Stanley was much amazed with what he found in Uganda and spoke a lot about the country and even referred it as the’’ Pearl of Africa’’ in 1893 than John Speke had been during his visit In Uganda.

Uganda in a unique country in its setting and gifted by nature compared to any other country in the whole of Africa. The country is Bio diverse nation in the world offering variety of tourist attractions, inform of natural features, the many traditional cultures, the climate and the weather of the country regulated by its nearness to the equator.

Uganda lies along the East African plateau, it is a land-locked nation but as defined by Sir Winston Church Hill in 1958, “Gifted by Nature’’ from the beautiful scenery / landscapes, amazing animals, bird life, community and welcoming people really present it as the “Pearl of Africa,” making Uganda so famous as one of the great African safari tours.

The beautiful scenery of Uganda is special in that it contains green rolling hills, trees, waterfalls, streams, snow-capped mountains, rivers like the Nile River and large paths of the Savannah grasslands (National Parks). Visiting all these sceneries should take you to a range of attractions, the scenery is different compared to other places in Africa, for the people who have visited Uganda, truly have a lot to say about Uganda and would a agree with what is written here in this content.

Lonely planet calls Uganda as, Africa condensed in to one Country. And was the reason why lonely planet choosing Uganda as the ‘’best country to visit’ in 2012.

Also, CNN international, travel chose Bwindi Impenetrable Forest National Park in Uganda as one of the ‘’most Beautiful place in the world’’.

Uganda offers a wide range of attractions including, the Bunyonyi lake, the Rwenzori mountains (Mountains of the moon), Bwindi Impenetrable Forest National Park. Uganda also is the base for the Nile river flowing to various countries in Africa, and pouring its waters up to the Mediterranean Sea. The Virunga volcanoes in Mgahinga Gorilla National Park, just as Weston Churchill described Uganda in his words ‘’ the scenery id different”. Reason enough to refer Uganda to the Pearl of Africa. Come Visit Uganda you will fall in love with this Country.

Uganda’s climate is excellent all year around and you can visit the country any time of the year. Due to the fact that the country is located on the Equator line the climate is conducive but also because of it Elevation, and the natural features, like the lake Victoria, the Virunga volcano, the Rwenzori Mountains, as regulated the weather of the country thus making Uganda one of the best safari destination for your life time experience. Visit Uganda and enjoy the best climate in East Africa.

Why is Uganda called the pearl of Africa? Uganda experiences two rainy seasons in the year, the short rains and the longer rainy season. The longer rains are received from March to May and through October to November and light rains are from November to December with average annual temperatures from 26 degrees Celicious.

Uganda is a very diverse country

Uganda is small and locked country but rich in biodiversity and it’s among the top ten countries in the world when it comes to Biodiversity. Uganda is indeed gifted by nature. Uganda offers a variety of attractions to see ranging from the prolific wildlife distributed in different national parks. Uganda indeed is a home of not only the big five game, but the big 7 wild game that is the Elephants, Rhinos, Leopards, Buffalos, Lions and the additional huge number of the mountain Gorillas and the Chimpanzee. There also others like the giant crocodiles, the Nile crocodiles, and over 1,080 different bird species which make Uganda a bird watching paradise. Also, the endangered Nubian Rothchild Giraffes, the tropical forest, the lush savannah vegetation, Lakes and Rivers, the rolling hills and many more. Visit Uganda and you will discover far beyond your imagination

Ugandans are friendly and warm welcoming

Almost everything in Africa is different, the scenery, the weather and the climate among others and most especially the people, the hospitality of the people is different from elsewhere in whole of Africa. Upon arrival at the airport, you will be welcomed by the happy and joyful people you meet at the airport.

Why is Uganda called the pearl of Africa? Ugandan’s are some of the most welcoming and friendly people, they joy of receiving a visitor in one’s homes is clearly shown in their faces and mostly in the hearts of the people. The friendly welcoming of the visitors in Uganda follows the tradition and the different cultures in Uganda where the host assumes full responsibility of the visitor, the visitor is given all the respect he derives from the time of his arrival and the departure from the home he visited.

Don’t warrior about language barrier while in Uganda, Uganda is one of the best English speaking countries in Africa even Winston chill noted that in his book. You will definitely feel at home while in Uganda because we got you covered.

Tourists from far and wide gracing Uganda’s lands have regularly complimented the fertile soils and fruit-friendly lands as their healthy living encounters have been top-notch across their land tour.

Uganda is really Africa’s Fruit Basket, more than 50 kinds of bananas, pineapples–that is simply the Best, Passion Fruit, Mangoes, Watermelons, Jackfruit, Papayas, Citrus Fruits, Star Fruits, Avocados and even Apples–Uganda is Africa’s Fruit Basket. Uganda is home to the finest avocados contained throughout the world, too. This is a big field in which their industry thrives in fruit growing as is the majority of the population. There also different kinds of bananas grown, Uganda is indeed the tropical fruit paradise

Depending on the time you visit the country, you will find fresh fruits, and harvest time in Uganda is always done several times in unlike in many other countries.