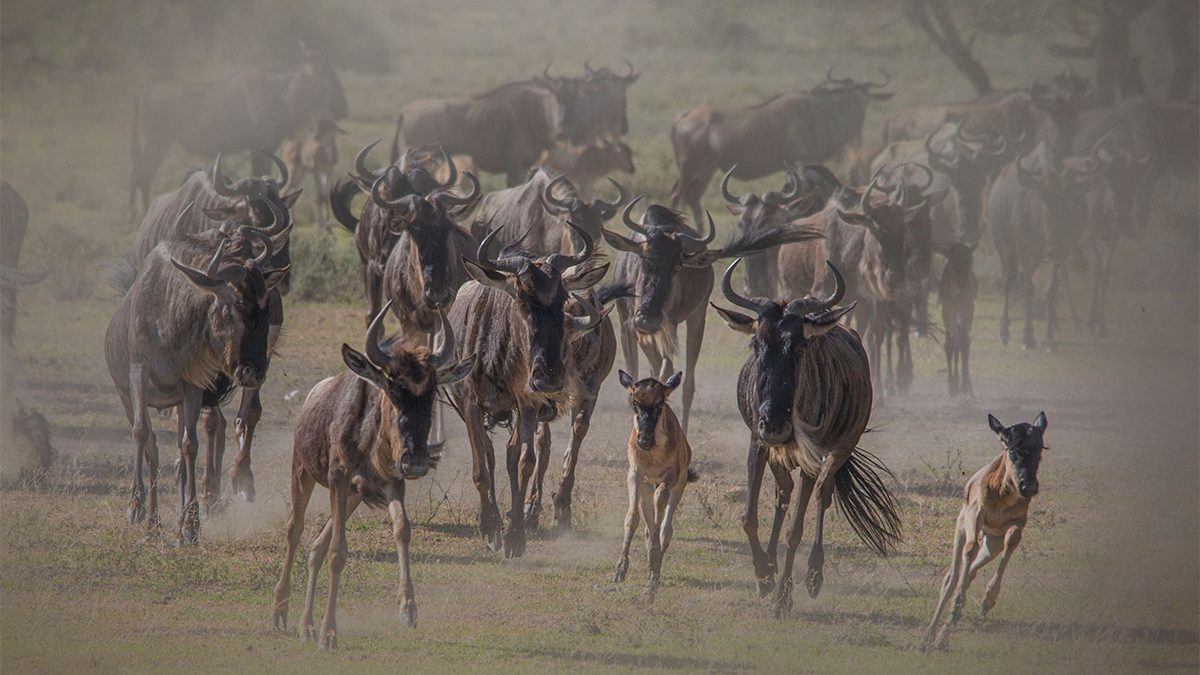 Wildebeest calving season in Serengeti – After the rutting season in the great Serengeti plains in the months of May and June when the wildebeest are at the Grumeti area preparing to head to the Mara river for one of the best spectacles on earth and one of the biggest annual animal migration in the world also considered as he world cup of Africa by many animal enthusiasts as millions wildebeest and thousands of Zebras participate in the annual migration.

The Serengeti plains plays host to hundreds of thousands of animals during the migration. In June and July wildebeest make their way across the Grumeti River moving northwest in the park, a sight that easily tops the bucket lists of many safari travellers as one of east Africa’s must see safari highlights and the wildebeest migration is second to the gorilla tracking experience in Uganda’s Bwindi impenetrable national park and Mgahinga gorilla national park and Rwanda’ volcanoes national park. By December, the herds have started to make their way back down south to the southern Serengeti to feed on the short green grasses of the plains. By late January and early February, perhaps the greatest spectacle of the Serengeti takes place with the wildebeest calving season. Approximately 8,000 young wildebeest are born every single day during the peak of the Serengeti calving season. There truly is nothing that compares to seeing a baby wildebeest take off running just minutes after being born, due to the huge number of predators that are attracted from southern Serengeti and western Ngorongoro conservation area.

Lions, hyenas, and cheetahs show up in large numbers to patrol the grasses, waiting for the perfect time to make a kill. But an easy kill isn’t always guaranteed. Female wildebeest instinctively know to head to the short grass plains so that they can see approaching predators. There they form a barricade around birthing mothers to protect them and the young when they are the most vulnerable, during birth, ensuring the majority of the young survive in what is termed as the survival for the fattest in the wild and this is not the only threat that the wildebeest face but this is part of the dangerous Mara river crossing which then takes place from July to October between the open plains of Serengeti and Masai Mara.

Where does the calving season take place in the Serengeti Tanzania?

Mobile migration camps follow the herds throughout the year and position themselves close to the wildebeest during calving season. With tents of wood and canvas, they offer a true “Out of Africa” authentic luxury Serengeti safari experience with the promise to see exceptional game and predator activity during your visit between January and February.

If a mobile-tented camp is your preference, we recommend Olakira mobile camp, located in the Ndutu region of the southern Serengeti, Ubuntu mobile Camp, positioned close to the Ngorongoro Conservation Area, and Kimondo mobile Camp, set deep in the southern Serengeti with views of a permanent waterhole. Each camp offers eight guest tents with en-suite bathrooms and a common area for meals and relaxing between game drives. From your private porch or terrace, enjoy your morning cup of tea or coffee while keeping your eyes open for game in the vast Serengeti plains.

Permanent lodge in the area, consider Mwiba safari lodge, one of our favourite properties in the southern Serengeti. It’s location in the Mwiba Wildlife Reserve in the greater southern Serengeti and overlooks a rocky gorge on the Arugusinyai River. Lush botanicals, ancient coral and acacia trees, and 33 freshwater springs surround the lodge. Eight double suites are elegantly decorated with linen sofas, ornate wood carved furniture, and neutral tones of creams, tans, charcoals, and black. Rooms are open with retreat-like bathrooms with large soaking tubs, outdoor showers, and copper fixtures. A large deck looks out over the stunning landscape. From Mwiba Lodge, excursions can head into the heart of the calving area to see the phenomenon up close. Beyond game drive, Mwiba offers a wide range of activities including bush walks on the Mwiba Wildlife Reserve, cultural village tours, and rock art tours.