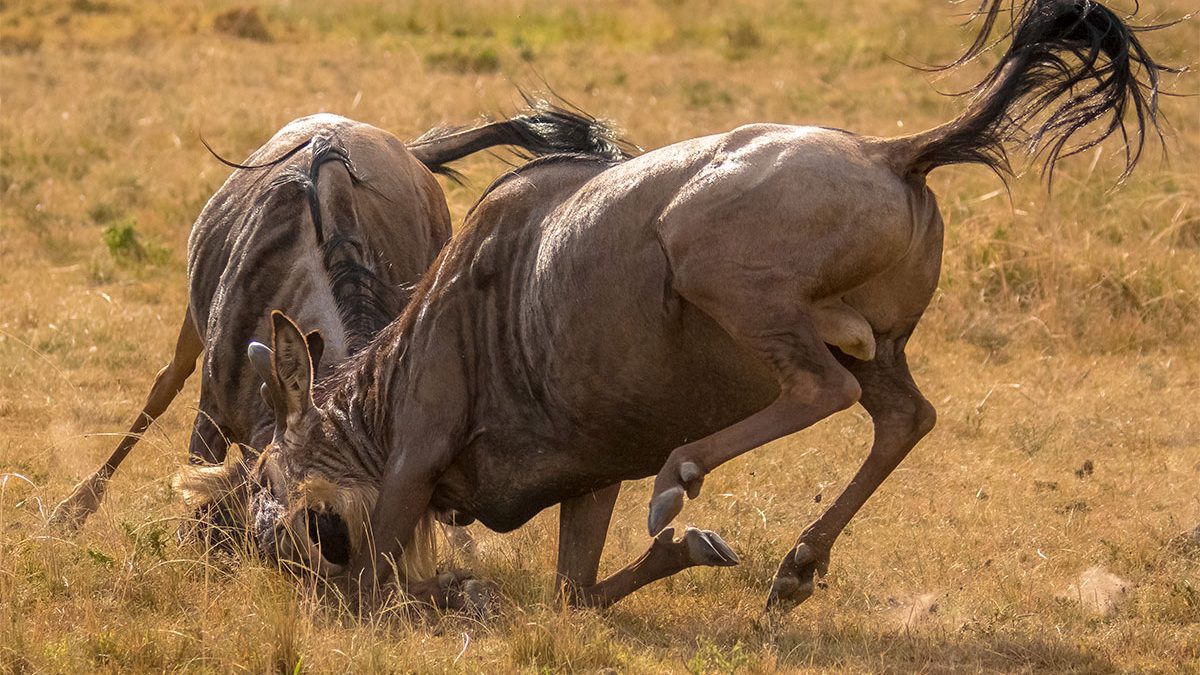 Wildebeest Rutting season in Serengeti – The Serengeti forms the backdrop to one of the most breath-taking events in the entire animal kingdom – the annual great wildebeest migration. This is actually a year-long search for food and water by wildebeest, with accompanying herds of zebra and gazelle. The migration usually follows a clock-wise direction, but is guided by rain and the growth of grass; at any time the animals can ignore tradition and follow the rain clouds and this has been confirmed by the wildebeest migration hard trackers which has seen the movement of the wildebeest observed from June to May annually across the Serengeti plains and the Masai Mara plains.

What is Rut in the wildebeest?

Rut in wildebeest is an annual period of sexual activity in wildebeest and some other animals like the Zebras during which the males fight each other for access of the female wildebeest.

May-June is the beginning of the rut season of the wildebeest migration as the herds head north-west past the breath taking plains of Simba kopjes and Moru kopjes and into the woodlands of the hilly country west of Seronera valley towards the world’s second largest fresh water the Lake Victoria, This marks the beginning of the annual rut, with thousands of cows mated in less than a month as the herds gather in the woodlands and on the plains of the Serengeti’s Western Corridor. The peak of the rut seems heavily influences by the state of the moon, with the full moon in May/June being a good bet for anyone seeking the most action during this period the males fight aggressively amongst each other as they fight for females.

Seemingly vicious fighting between dominant or territorial males takes place during the rut, though there is generally little actual violence or serious injury. And in spite of these energetic duels, the males have little say over their choice of mates, for it is the females who do the actual choosing.

What happens after the wildebeest rut?

After the matting taking place between May and June most of the cows conceive as the wildebeest make their way through the Grumeti river before arriving at the Mara river before they start their epic journey to cross the highly dangerous brown waters of the Mara river.

How long is the Gestation period of the Wildebeest?

Wildebeest gestation period is between 8-8.5 months, this usually runs from May-June during the beginning of the dry season in Serengeti and run through to January –February when the calving seasons starts again in the Serengeti, this is considered one of the spectacular times of the year to visit the Serengeti for action packed safari holiday as many predators are attracted like the Lions, cheetah and hyenas whose primary target is the newly born wildebeest calves.

Wildebeest calves are one of the fascinating safari highlights to witness as the new born calves start to walk few minutes after they are born as one of the adaptations to survive the dangerous predators.

When is the wildebeest calving season in the Serengeti?

Calving usually takes place between January and February of each year. In January the herds begin making their way to the south of the Serengeti after the rains start falling.