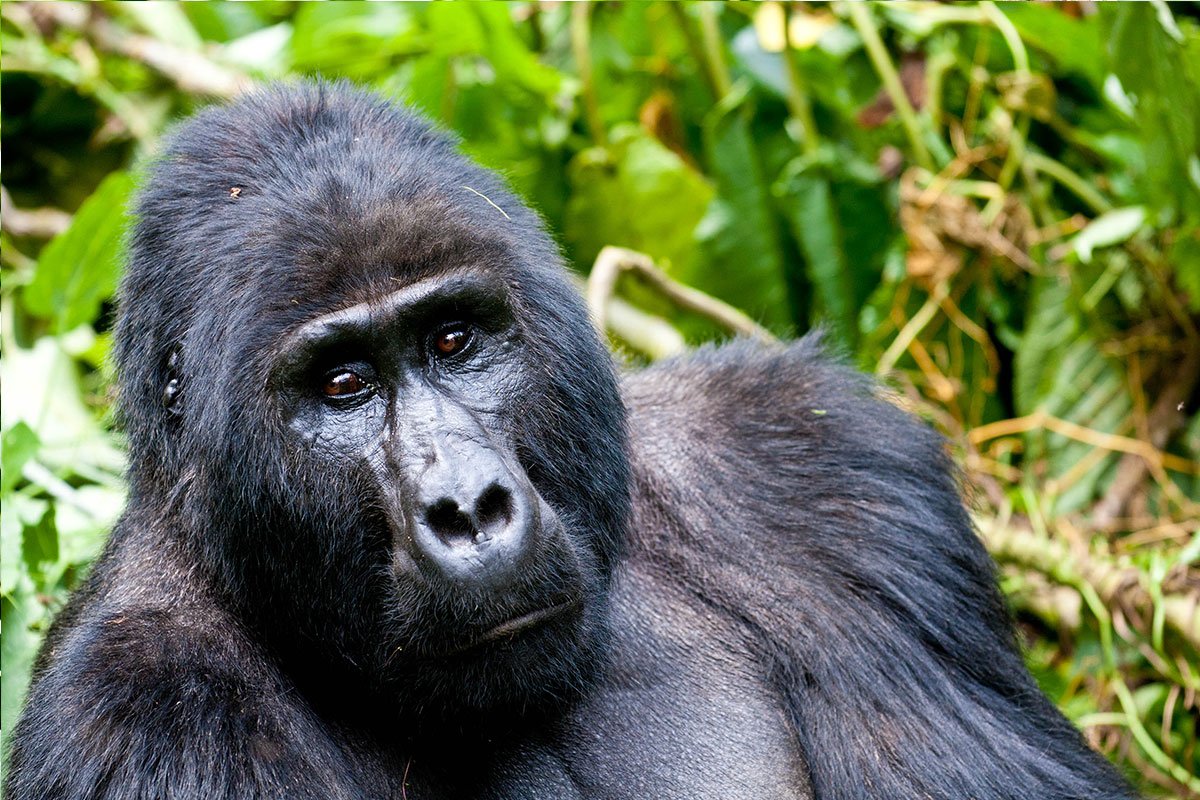 Bwindi Impenetrable Forest National Park located in the southwestern region of the country, on the edge of the rift valley commonly referred to as the impenetrable forest, Bwindi National Park is bordered by the Democratic Republic of Congo (DRC) on the western side; Kabale town to the southeast is the nearest main town to the Park, 29 kilometers away by road. It covers an area of 331 square kilometers and is located in the highest parts of Kigezi highlands with an altitude of 1,190 to 2,607 meters above sea level and 60% of this magical park has an elevation of over 2,000 meters above sea level. The highest elevation in the park is Rwamunyonyi hill at the eastern edge and the lowest part of the park is located at its most northern tip.

Bwindi Impenetrable forest became popular to the World because of Gorilla tracking; it is a habitat for more than half of the world’s remaining Mountain Gorilla population in the world. These gentle primates are highly endangered species and the forest possesses more than 360 individuals of the plausible 800 plus Mountain Gorillas in the entire world. They are highly endangered because of poaching, habitat loss and diseases. This National park generates one of the highest revenues to Uganda Wildlife Authority amongst all the National Parks in Uganda.

Bwindi National Park is a world heritage site for mountain gorilla gorilla tracking experience which is the tourist attraction and highlight in East Africa and in Uganda. With different Gorilla families that can be booked by 8 tourists per Gorilla family per day. They are inhabitant in four sectors of Buhoma the Northern part, Ruhija the Eastern part, Nkuringo the Southern part, and Rushaga still in the Southern part of Bwindi and all are under the protection of Uganda Wildlife Authority the government body in charge of all Uganda National Parks.

Bwindi Impenetrable National Park is a typical tropical rain forest with an annual mean temperature range of a minimum of 7–15°C to a maximum of 20–27°C. Its annual rainfall ranges from 1,400 to 1,900 millimeters. The heavy rains climax from March to April and from September to November. It is endangered with various attractions like Waterfalls, Swamps, Rivers that flows to the north, west and south directions that include River Ntegyere, River ishasha.

Bwindi National Park was renamed as crown forest in 1932, by that time it had two blocks the north and the south block which was designed as kasatora crown forest. The area was composed of 207 kilometers squared and it was under the control of Uganda government forest reserve.

The Park later on, it was established in 1991 and turned to be Bwindi Impenetrable Forest National Park that covers an area of 330.8 kilometers, with a number of Mountain Gorillas. During the reservation of the forest there was large impact on the Batwa people who were not allowed to enter the National park.

Bwindi Impenetrable National Park is natural forest reserve, where tourist can do nature walks from different walking trails leading them to beauty of the forest and waterfalls, swamps and rivers. This gives them more chances to spot other primates like black monkeys, blue monkeys, colobus monkeys and many more which could have missed on the Gorilla trekking.

Bwindi Impenetrable Forest National Park is a home of Mountain Gorillas of over seventeen (17) Gorilla families that can be visited by tourists every day, each family can be booked by eight (8) tourists per group per day and is the highlight among all the activities in our Uganda safari packages. Gorilla trekking can take you from 30 minutes to three quarters of the day depending on where you find them and once you find them you are allowed to stay with them for only one hour. One Gorilla Trekking permit is only USD 600.00 per permit per trek. Gorilla trekking can be strenuous so a certain level of fitness is required.

Bwindi National Park offers Gorilla habituation experience to tourist interested, this is a four hours experience with the researchers which gives you a chance to learn more how they are habituated and also there day to day activities this Gorilla Habituation Permit cost is USD1500.00 per person per trek. Note that the four hours start counting when you find their fresh trails.

Bwindi has over 346 species of birds of attraction and this allows you spend more time looking out for them. These birds include honey guide, dusky crimson, yellow eye, black fly catcher, bar tailed trogon and many more other species.